Concessionary 4-Year Verizon Deal Sealed, Despite Dissent in the Ranks 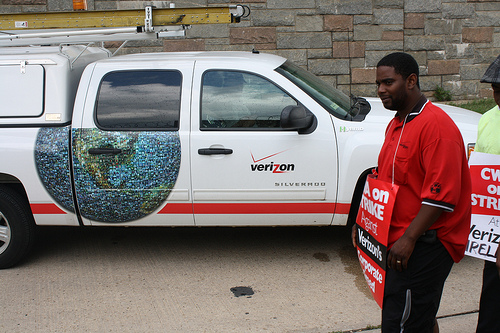 Unionized Verizon workers, who went on a three-week strike last August, have signed a contract--though some members are grumbling over major concessions.   (Flickr / Creative Commons)

On Friday, the two largest unions at Verizon agreed upon a four-year contract, ending a 15-month standoff. Many rank-and-file members were skeptical of the numerous concessions in the contract, but ultimately voted for ratification after being heavily lobbied by union leaders.

When negotiators for the Communications Workers of America (CWA) and International Brotherhood of Electric Workers (IBEW) initially announced the draft contract deal with Verizon ​on September 20, leaders were quick to spin it as a victory. “The solidarity of CWA members and the support of our progressive allies made this contract happen,” said a statement issued by Ed Mooney, Vice President of CWA District 2-13, the local that covers CWA members from Pennsylvania to Virginia. “Verizon workers will keep their standard of living and the benefits and working conditions we've fought for over the years.”

IBEW and CWA's salesmanship of the tentative agreement contrasts with the actions of union leaders in another recent, high-profile negotiation. When Chicago Teachers Union negotiators reached a tentative contract with Chicago Public Schools in September in the midst of a strike, union president Karen Lewis said, “I’m not going to say this is the greatest thing since sliced bread and try to sell it to them. I’m not a marketer."

In contrast, the CWA and IBEW, which jointly represent 45,000 Verizon workers, appeared eager to sell the contract to members as it snaked its way through the process of ratification by locals--despite multiple concessions. The contract contains new provisions that will make Verizon’s union member pay premiums for their healthcare--premiums that would double over the life of the contract. The contract also newly requires retirees to pay a contribution for their health care. And, for the first time ever, new hires at Verizon will not be entitled to pensions, instead receiving more risky 401(k)s.

“No victory,” wrote IBEW Local 827 member Dan McDonald of New Jersey to Working In These Times upon first reading the terms of the tentative agreement. “When future employees will not have the same opportunities as me and my family had when I was hired. We failed. All we did was look out for 'ourselves' when the idea of a union is to look out for EVERYBODY! It’s a horseshit contract.”

McDonald's sentiments were echoed by other CWA members.

“We have one of the best union contracts in America today because CWA and IBEW members held the line in tough times. Perhaps most importantly, we didn’t give in to company’s push for two-tier contracts--until 2003, when we conceded to no job security for new hires. Then in 2008 we conceded to a second tier on retiree health benefits for new hires. And in this tentative agreement, there’s no pension for new hires,” CWA Local 1101 member Pam Galpren told Working In These Times. “We all know this is how contracts are dismantled over time and unions are weakened. It’s an incremental process, with the company counting on the fact that members won’t fight for the future generation, as long as we can protect what we have. Verizon has a long-term plan to weaken our unions, and they are moving progressively forward on that plan.”

However, union leaders said that the contract was the best that they could get. Fourteen months of negotiations with Verizon, which began after a three-week strike in August 2011, has led to no gains. They feared that Verizon would get the National Labor Relations Board to declare an "impasse in bargaining," allowing Verizon to impose an even more concessionary contract than the one they eventually accepted. The only other option for CWA was a strike in which Verizon would, legally, be allowed to bring in workers to permanently replace them. A lengthy strike, leaders said, could have had the potential to break the union.

Union leaders were not shy about expressing these fears to their members during the ratification process. Don Trementozzi, president of New England-based CWA Local 1400, sent out a mass text message while his local was considering the deal:

So you vote NO? Here’s what happens (maybe) President Cohen allows the company to give 7 days’ notice and the company imposes the last best offer. Except no $800.000 signing bonus, no 2 ¼ raise (that’s only upon ratification), all fired strikers are still fired (they come back only upon ratification). We work under the imposed contract. President Cohen is smart enough not to allow us to go to Slaughter!! That’s a real possibility!!

“It is easy to say 'no.' It is easy to scream 'sellout.' It is even easy to call a strike—if you do not take seriously the responsibility for what would happen to 34,000 CWA families during a lengthy strike,” wrote CWA District 1 Vice President Chris Shelton in a letter to 34,000 members October 1. He continued:

I truly believe—and so did your Bargaining Committee—that if we did go out, most likely it would not have been for two or three weeks, maybe not even two or three months. We believed that if we walked, we had to be prepared for a strike that might have lasted longer than our 17- week strike in 1989, maybe six months or more. In fact, going out might have been walking into a trap the company had set for us—giving them an opportunity to replace thousands of us and break our union.

However, some CWA members felt that a strike was a risk they had to take.

“I think that going into it the perspective of the leadership at the national level was that we were going to get a concessionary contract. From the point of view from someone who has to work here every day, I found myself asking why didn't we fight like we did in 1989,” says Amy Muldoon of Queens, New York CWA Local 1106. She says she wasn't convinced that striking workers would be permanently replaced:

The leadership of our union doesn't look at this struggle as a social or political question. They aren't looking at could our fight be part of a social movement about class in our country. The Chicago Teachers strike shows that could be the case. I mean look at that union, it’s a union that has been hammered ideologically for the last five years. They struck, they had the public on their side, and they came out ahead. So the question is why can't we do that?

However, the Verizon contract covers not only workers like Muldoon in the union bastion of New York City, but also workers from Maine to Virginia who didn’t feel they would have had strong local support for a strike.

“With how bad the economy is here in Rhode Island, they could find scabs to replace us in a second,” says  Eddie Blackburn, treasurer of Providence, Rhode Island-based IBEW Local 2323. "You look at Maryland, Virginia, Massachusetts, New Jersey it’s the same. [Local] 1101 of Brooklyn--they are in a unique position but they aren't going to carry us all."

Blackburn says the contract also provides key job security measures that will prevent Verizon work from being outsourced to outside contractors. The provisions increase the percentage of Verizon calls that must first be directed to a unionized call center in the same region. If there are no regional call centers available, the call must go to unionized call centers in at least two other regions before being sent out to non-union contractors.

In my local alone, we are not only saving 170 bodies, we added 60 bodies. In the grand scheme, we are netting 300-plus bodies in New York and New England. So it’s actually adding jobs,” says Blackburn. “I have 15 years in so I might not even get to the pension, the concern for me is job security more than the pension cause we don’t have anybody who is even pension eligible. We might not make it 5 not even 25 unless we stop this work from being sent out to vendors.

Blackburn, who urged his members to vote yes, felt the contract gives them the time needed to organize more Verizon employees, which they need for a successful strike:  “We stop the bleeding and live to fight another day. I would call it a tactical retreat."

Muldoon says she hears this "tactical retreat" language every time the union agrees to concessions at the bargaining table. “Labor is at a moment where things could go either way," she says. "It’s a roll of the dice. And we aren't going to improve things if we stick with the old playbook of avoiding the worst attacks instead of taking on these corporations and local governments."

At the end of the day, however, not many Verizon workers were willing to gamble with their relatively good livings. On Friday, CWA-IBEW announced that their locals had ratified the contracts (they did not disclose the vote margin). Even Dan McDonald of Camden, New Jersey, who initially described the contract as “horse shit,” says he voted for it.

“We would have been out of a job if we didn’t take this,” says McDonald. “Verizon would have declared an impasse and shitcanned all of us.”