In Conference Call, Romney Urged Businesses To Tell Their Employees How to Vote 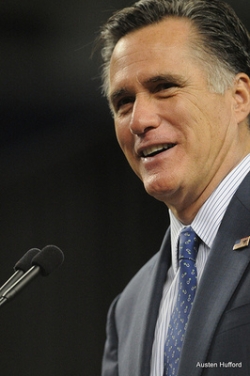 In a June 6, 2012 conference call posted on the anti-union National Federation of Independent Business’s website, Republican presidential candidate Mitt Romney instructed employers to tell their employees how to vote in the upcoming election.

Romney was addressing a group of self-described "small-business owners." Twenty-six minutes into the call, after making a lengthy case that President Obama's first term has been bad for business, Romney said:

The call raises the question of whether the Romney campaign is complicit in the corporate attempts to influence employees' votes that have been recently making headlines. On Sunday, In These Times broke the news that Koch Industries mailed at least 45,000 employees a voter information packet that included a flyer endorsing Romney and a letter warning, “Many of our more than 50,000 U.S. employees and contractors may suffer the consequences [of a bad election result], including higher gasoline prices, runaway inflation, and other ills.” Last week, Gawker obtained an email in which the CEO of Westgate Resorts, Florida billionaire David Siegel, informed his 7,000 employees that an Obama victory would likely lead to layoffs at his company. This week, MSNBC’s Up with Chris Hayes unveiled an email by ASG Software Solutions CEO Arthur Allen in which he, too, warned employees that an Obama second term would spell layoffs.

In the June call, Romney went on to reassure his audience that it is perfectly legal for them to talk to their employees about how to vote:

Nothing illegal about you talking to your employees about what you believe is best for the business, because I think that will figure into their election decision, their voting decision and of course doing that with your family and your kids as well.

He's correct that such speech is now legal for the first time ever, thanks to the Citizen United ruling, which overturned previous Federal Election Commission laws that prohibited employers from political campaigning among employees.

In the post-Citizens United era, “there is not much political protection for at-will employees in the private sector workplace,” explains University of Marquette Law Professor Paul Secunda, a pro-union labor lawyer. "It is conceivable, under the current legal regime, that an employer like Koch could actually get away with forcing his employees, on pains of termination, to campaign for a given candidate or political party."

Romney provided his call audience with a number of talking points to relay to their employees:

I particularly think that our young kids--and when I say young, I mean college-age and high-school age--they need to understand that America runs on a strong and vibrant business [sic] ... and that we need more business growing and thriving in this country. They need to understand that what the president is doing by borrowing a trillion dollars more each year than what we spend is running up a credit card that they’re going to have to pay off and that their future is very much in jeopardy by virtue of the policies that the president is putting in place. So I need you to get out there and campaign.

Beyond Romney’s statements on the call, it's unclear whether his election operation is actively coordinating workplace campaigning by businesses. Romney press secretary Andrea Saul did not respond to In These Times’ request for comment.

However, the conference call raises troubling questions about what appears to be a growing wave of workplace political pressure unleashed by Citizens United.