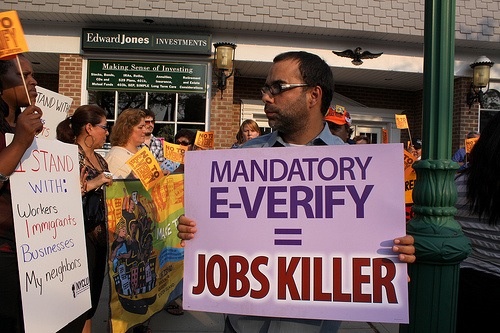 Under the program, employers electronically check workers' Social Security numbers to determine whether they are legally eligible to work in the United States.

Juvenal Chavez, founder and owner of Mi Pueblo, says the company submitted to the program because of a federal Immigration and Customs Enforcement (ICE) audit this summer, what is commonly called a “silent raid.” (ICE officials would not verify whether this audit occurred; only investigations that result in fines or criminal convictions become public.)

Thousands of I-9 audits over the past several years and an ever-increasing level of employer enrollment in E-Verify programs have resulted in massive firings across the nation. Furthermore, the Social Security Administration (SSA) has recently reinstated its “no-match letters,” notifying employers when a workers SSN fails to match government records.

Employers who are found in an I-9 audit to be "knowingly" hiring and continuing to employ undocumented workers face fines of $375 to $16,000 per violation. But employers who participate in E-Verify get an informal assurance from ICE that they will not face the same penalties. In exchange, employers must agree to permit Department of Homeland Security and SSA officials to visit work sites to review E-Verify records and other employment records related to E-Verify.

Last year, California state legislators passed a law forbidding local governments from requiring businesses to E-verify their workers, but the practice continues coluntarily, as companies with a large immigrant population workforce have strong incentives to sign up and avoid ICE penalties.

Hundreds of workers could lose their jobs at Mi Pueblo as it participates in E-Verify. Many of the workers are unhappy and scared, afraid of being deported. Technically, E-Verify only checks Social Security numbers and not immigration status, but that does little to reassure workers.

“People are quitting left and right, no matter how much we tell them not to. ... A lot of valuable employers who have worked there a long time are leaving," says Gerardo Dominguez, campaign coordinator for the Justice for Mercado Workers Coalition, formed to organize Latino and Asian supermarket workers in California.

The United Food and Commercial Workers (UFCW) Local 5 suggests a different solution to the problem of ICE audits at Mi Pueblo: organizing the company's 3,200 workers. According to the DHS website, I-9 audits must be suspended when a labor dispute is in progress.

Were the chain store to unionize, it would be a great victory for UFCW Local 5. So far, Mi Pueblo has not had a stellar record when it comes to labor relations.

Last year, four workers in San Jose launched a two-day hunger strike to protest massive layoffs at Mi Pueblo. The company claimed layoffs were limited to 150 workers, although Gerardo Dominguez insisted the number to be as high as 300. The company said it was because sales were low but at the same time the company was opening three new stores in nearby Seaside, Vallejo and Turlock. Dominguez suspects a cost-cutting motive: “Many of the workers in San Jose were there for a long time. Hiring new people, you will pay less."

The Los Angeles Times reports that UFCW and the Teamsters have filed eight actions with the National Labor Relations Board (NLRB) over the last two years alleging anti-labor practices by Mi Pueblo. They charge that the company failed to recognize and bargain with truckers who unionized and had retaliated against workers with union sympathies.

In two of the cases, involving thwarted organizing attempts by grocery workers in Gilroy and Hayward, Calif., and workers at a warehouse in Milpitas, Calif., that distributes products for Mi Pueblo, NLRB ruled in favor of the unions. In both, however, Mi Pueblo got a mere slap on the wrist. According to UFCW, the ruling said that the store management cease and desist from interrogating employees about union support or union activities; to stop threatening workers with possible adverse consequences if they join a union; and to prominently post in its stores that workers can express views about unionism.

UFCW is going forward with the boycott to pressure the chain to stop using E-Verify and to allow its workers to unionize. "We want Mi Pueblo to sign a labor agreement and not retaliate against employees who want to form a union,” says Dominguez.

Ironically, when Mi Pueblo founder Juvenal Chavez came to this country from Aguililla, Mexico, he was an undocumented immigrant worker. But the one-time janitor became a U.S. resident and opened his first supermarket in 1991. Chavez designed Mi Pueblo specifically to appeal to the Latino population, employing bilingual cashiers and stocking foods from various parts of Mexico. It grew into a thriving chain of 21 markets across the Bay Area, Central Valley and Monterey Bay area, with an annual revenue of $300 million.

In response to the negative attention, Mi Pueblo hired a top immigration lawyer and a pro-immigrant activist, both from Arizona. “They produced a video for the workers and talking points. They are trying to portray themselves as people who understand the whole thing. They have not acknowledged that there is a legal dispute,” said Dominguez, adding, “The workers are very depressed. From their point of view they feel betrayed by the company and attacked by the government.”

Mi Pueblo spokesperson Perla Rodriguez told the Los Angeles Times, "We don't want to create fear in our community, and we recognize this is a difficult move to understand. It was a decision that weighed very heavily on us."

Whereas the Bush administration was inclined toward dramatic workplace raids, the Obama administration has preferred the so-called "quiet raids" of I-9 audits and E-Verify programs in handling undocumented workers. According to ICE, there have been 3,764 so-called “quiet raids” for fiscal year 2012. The audits have led to massive firings across the nation.

"ICE is engaging in this broad, sweeping enforcement campaign, yet no one knows how they're doing it,” Francisco Ugarte, an attorney with the San Francisco-based Dolores Street Community Service, told the Los Angeles Times. Ugarte is part of a coalition of immigrant and worker rights groups, including the National Immigration Law Center, that has filed a Freedom of Information Act request with the Department of Homeland Security for details of the audit process.

Just last year Pacific Steel Casting in Berkeley, CA, fired more than 200 workers after an I-9 audit, which Working In These Times covered here and here. These were highly skilled workers who had been with the company for years.

Meanwhile, statistics show that enrollment in E-Verify has grown to nearly 400,000 employers nationwide, with more than 1,000 businesses signing up every week. In California, about 30,480 firms are enrolled, up from 11,514 in 2009. In response to a recent U.S. Citizenship and Immigration Services survey, 14 percent of participants said they had signed up in hopes of avoiding an ICE audit, according to the Los Angeles Times.

Immigration enforcement at the worksite leaves a chilling effect among workers who remain after an enforcement action is completed; they become less likely to report workplace mistreatment or even to voice their concerns to others. This reluctance, in turn, results in lower wages and working conditions for the remaining workers. In fact, when ICE relies on tips and rumors instead of a strategic targeting of labor law violators, unscrupulous employers can use the threat of immigration enforcement as a tool to ensure worker compliance, no matter the wages paid or working conditions imposed.

Said Virginia Kice, an ICE spokeswoman, told the Los Angeles Times that E-Verify is a voluntary program. "Do we encourage but not compel? Absolutely."

At the time of the Pacific Steel firings, Conchita Lozano-Batista, an attorney with Weinberg, Roger and Rosenfeld, one of the largest labor and employment law firms in the U.S., said, "From janitorial firms, to Pacific Steel, to Chipotle, there is a lot that we just don't know about federal immigration audits in the workplace.” But she and other civil-rights activists note that companies with unionized workers appear to be most commonly audited. Says Lozano-Batista:

Without the full picture and supporting documentation, it would seem that the employers who are bearing the brunt of these audits are employers who are involved in collective bargaining agreements with labor unions. That is bad for business, workers and the American people.