Right-to-Work in Michigan: Not as Repeal-Proof as Republicans Think It Is 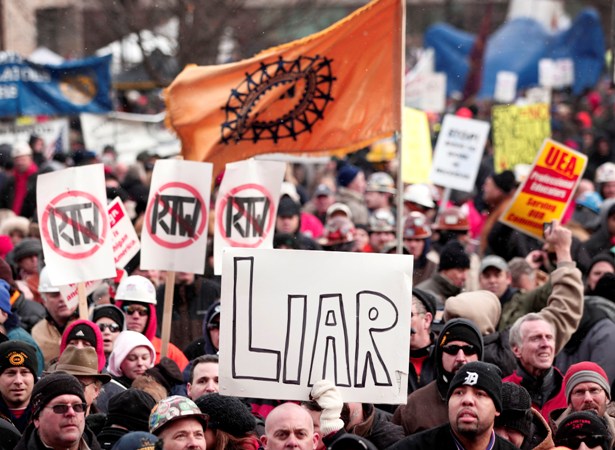 Union activists have been amassing outside the Capitol in Lansing, Michigan, this morning in hopes that hell might freeze over and a pair of right-to-work bills would fail. The number of protesters has reached an estimated 10,000 so far, filling the Capitol and flooding East Michigan Ave. for several blocks. In fact, classes were cancelled for 26,000 Michigan students today because their teachers called in sick or took vacation days in order to attend the protest.

The Republican-controlled House rushed to complete the vote while the 13 lame duck Republicans who will leave their seats next year were still in office. It was projected that the bill would have failed had the vote been postponed until after January, when the House structure shifts from its current 64 Republicans and 46 Democrats to 59 Republicans and 51 Democrats.

The opposition to the bill is overwhelming: Thousands of protesters booed as the results were announced, six Republicans united with the Democrats to vote against it, and Lansing’s council and mayor have openly disapproved of the legislation. Obama denounced it as well, saying the bill gives workers “the right to work for less money.”

Nevertheless, these laws may prove difficult to overturn. The right-to-work legislation was attached to an appropriations bill, which protects it from referendum under state law. Representative Gary Peters (D-Mich) suggests that Governor Rick Snyder could use his power of line-item veto to strike the $1 million appropriation, thus signing the bill into law but leaving it eligible to be placed on the ballot. But that doesn’t seem likely, considering that the governor, who previously denounced right-to-work, flip-flopped and added it to his agenda due to pressure from billionaire CEOs. Snyder is expected to sign the bill straight away.

Union organizers, however, say the legislation can still be undone. There are four methods under Michigan state law through which a proposal can be placed on the ballot. While a legislative referendum cannot be used to challenge right-to-work, the Citizens Research Council of Michigan reveals that citizens could still launch a statutory initiative, though this requires more signatures. In order to do this, organizers would have to file petitions containing signatures of registered voters equal to at least eight percent of the votes cast in the last election for governor. Even if the legislature rejects the initiative, it would go on the ballot for 2014 general election.