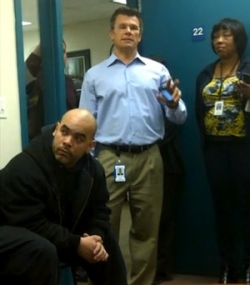 A Wednesday encounter between workers and management ended in 22 firings. (CWA)

Around 8:30 a.m. on Wednesday morning, four dozen unionized Cablevision workers gathered outside of an executive’s door in the company’s Brooklyn office and demanded to speak to him, citing Cablevision’s “open door” policy. The workers, who voted to join Communication Workers of America (CWA) over a year ago, were upset over how contract negotiations were going—they felt that Cablevision was not addressing union concerns about pay, benefits, pensions and job security. An hour later, says CWA, the still-waiting workers were shocked to be informed by management that 22 of them were to be fired.

CWA believes that the firings were illegal retaliation, noting that the 22 workers were all key union leaders within the workplace.

“It’s definitely illegal,” says fired Cablevision worker Jerome Thompson. “[Cablevision is] basically messing with my family, my livelihood, my health benefits… What they are doing is creating an atmosphere of fear and doubt for the union. This is part of their union-busting strategy to … have all these other guys afraid to join the union or even be involved.”

The company, however, disputes the union’s interpretation of events.

“A small number of Brooklyn technicians refused to work on Wednesday after several requests to return to their jobs. Therefore, Cablevision took legal and appropriate steps to maintain adequate staffing and ensure its Brooklyn operations are not disrupted,” wrote Cablevision in a emailed statement to Working In These Times.

“That is an absolute lie,” says Thompson. “We did not refuse to go to work. We just wanted to exercise Cablevision's open door policy, and we said once we were able to get five minutes of their time that we would go back to work.”

A partial video of the interaction with management, released by CWA, shows workers stating they are ready to work, but wish first to speak to management under the companies' open-door policy. "We're not refusing," several say.

Cablevision, however, emphasized repeatedly in telephone conversations with Working In These Times that the workers refused to go back to work. The company also denies the union’s charges that Cablevision  has not bargained in good faith.

“Cablevision has had 17 bargaining sessions with the CWA union … with several more scheduled in the coming weeks,” Cablevision wrote to Working In These Times. “We have reached tentative agreement with the union on more than 20 contract issues.”

However, CWA says that the company has bargained only on “minor issues” and not what the union views as “major issues.”

Thompson fears that the company is drawing out the negotiations in an attempt to get the union decertified. Under U.S. labor law, if after a year, a company hasn’t reach an agreement with union, members can vote to decertify.

The union, however, says it is not going to back down. On Thursday morning, CWA held a rally of over 100 workers and drew statements of support from several New York City elected officials.

“This is a blatant attack on workers,” said New York City Public Advocate Bill de Blasio in a statement.  “It's unacceptable, and we won't stand for this kind of reprehensible intimidation in Brooklyn or in any borough. Cablevision must be held accountable.”

CWA union organizer Erin Mahoney says that CWA has filed charges with the National Labor Relations Board (NLRB) seeking an injunction to reinstate the workers. That process, however, can take five to six months.

Until they get their jobs back, Jerome Thompson says, he and the other fired workers plan on protesting every day. Thompson believes that the union “still has a lot of strength” within Cablevision.

Update: This piece has been updated to reflect the fact that, contrary to early reports, there were 22 workers fired, not 25.