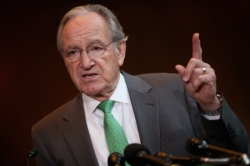 Democratic Iowa Sen. Tom Harkin (speaking here in December in defense of Medicaid) and Rep. George Miller (D-Calif) announced last week a proposal to increase the federal minimum wage to $10.10. But will people with disabilities be left out?   (Chip Somodevilla/Getty Images)

Their proposal, however, would not cover the 420,000 Americans with disabilities who are currently paid a subminimum wage of as little as a few cents per hour in some state-sponsored "sheltered workshops," such as Goodwill. These programs, licensed under provision 14c of the Fair Labor Standards Act of 1938, are intended to be for training, but many workers wind up as perpetual “trainees,” employed in sheltered workshops for years earning subminimium wage rates; thus becoming stuck in a cycle of poverty. While advocates have repeatedly tried to address this issue divides within both the Democratic Party and the disability community have so far prevented these laws from being sensibly revised.

Many advocates for the disabled have called for the 14c provision to be eliminated, suggesting that having Americans with disabilities work in sheltered workplaces often run by nonprofits or the state can cause as many problems as it solves.

“There are two big problems," says Barb Trader, executive director of TASH, an international advocacy group for persons with disabilities. "One is that they are segregated from society forever when they are in a sheltered workshop. The rest of us make friends and colleagues through our work. Work really defines so much of who we are. The other problem is lifelong poverty because there is no way these people are going to be able to achieve any type of sufficiency economically.”

In addition to the segregation and poverty engendered by sheltered workplaces, many advocates say workers with disabilities often face exploitation. In 2009, Iowa shut down a “bunkhouse”--essentially, a shed--where 60 men with disabilities employed by the meat processor Henry Turkey Services were forced to sleep. The bunkhouse was unheated, poorly insulated and infested with cockroaches. The company deducted $10,000 a week from the paychecks of the workers housed in the bunkhouse.

“Over 100,000 SEIU members support people with disabilities so they can live fulfilling lives as part of their communities," says SEIU spokesperson Arvil Smith. "We believe the well-being of workers and the people our members support are inextricably linked. These values inform SEIU members’ commitment to ending wage discrimination against workers with disabilities. Equal pay for equal work is a matter of basic fairness. That means no person with a disability who wishes to work should be denied the assistance they need to secure employment in the general workforce at minimum wage or higher.”

In addition to labor unions and some disability groups, the independent federal agency the National Council on Disability (NCD) has called for phasing out the 14c exemption of the minimum wage law.

Despite this opposition, closing the loophole for workers with disabilities does not appear to be on the table in talks about raising the minimum wage. The tension was on display Tuesday when Sen. Tom Harkin (D-Iowa), chairman of the Senate Health, Education, Labor, and Pension (HELP) committee, and Rep. George Miller (D-Calif.), senior Democratic member of the House Committee on Education and the Workforce, introduced their bill to increase the minimum wage. Asked whether the exemption for people with disabilities should be repealed, Rep. Miller said, “We should expect that to be part of this debate. It always is." He added that he agreed with the NCD's stance.

Sen. Harkin, however, does not agree. “Philosophically, Sen. Harkin would prefer that no person be paid less than minimum wage under any circumstances, but he has heard from a number of advocates for people with disabilities that eliminating the subminimum wage option without having a real plan to create sustainable employment alternatives would be detrimental to Americans with disabilities currently working in 14(c) settings,” wrote Allison Preiss, spokesperson for Sen. Harkin, in an email to Working In These Times following the Tuesday announcement. “Sen. Harkin is trying to change the subminimum wage program so that young people are not tracked into subminimum wage jobs without having a chance to experience competitive, integrated employment; and he’s working to promote upward mobility for people in those programs.”

One of the disability advocates opposed to the change is Bobby Silverstein, Harkin’s former top disability staffer. Silverstein now works as a lobbyist for ACCSES, a coalition of nonprofit groups that employ disabled workers.

“Would you hire somebody who is working at 30 percent and not meeting productivity goals?" Silverstein asks rhetorically. "What if somebody is not capable with or without an accommodation of working at a regular job?  Should we force them into a rehabilitation program with no work or sit at home and watch TV? If you eliminated 14c, you would lose the opportunity for these people to be trained to be employed.”

But other advocates say that there is little evidence that 14c-sheltered workplaces actually help workers with disabilities obtain jobs with standard wages. A 2001 study by the federal General Accountability Office (GAO) found that only 5 percent of workers employed in 14c-sheltered workplace programs left to take regular “integrated employment” jobs. They often point to Vermont, which eliminated 14c-sheltered workplace programs in 2003 and focused instead on providing wrap-around transition and job coaching services to disabled people and their employers so they could maintain regular jobs. Today, 40 percent of Vermonters with disabilities are employed in “integrated employment” jobs, compared to only 20 percent of workers with disabilities nationwide.

Disability advocates say that the real reason why groups like ACCSES support maintaining the 14c exemption is that they benefit financially from it. For instance, the CEO of Goodwill, one of the biggest employers of people with disabilities, makes more than $500,000 each year while some blind Goodwill workers are paid only $1.44 an hour.

“I think it has a lot to do with money," says Trader. "For ACCSES, it is about their business strategy. There is not an argument in the research or among the self-advocacy community for continuing the 14c program. People with disabilities are saying close those things down and divert the money into more productive ways of supporting people in getting real jobs."