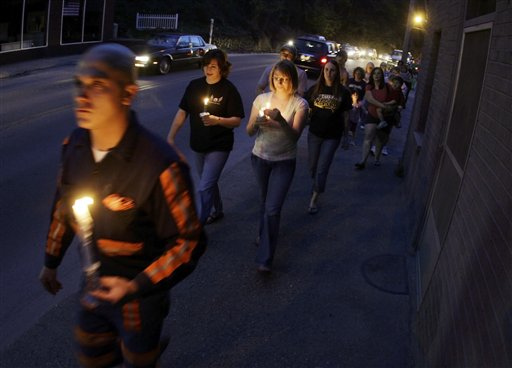 A 2010 candlelight vigil for those killed in an explosion at the Upper Big Branch coal mine in West Virginia. (Flickr)

As workplace safety and health advocates figure out how to fix workplace safety regulations in the wake of the West, Texas explosion, they agree that one focus should be speeding the passage of new rules. Though the notoriously slow rulemaking process wasn’t a factor in the West, Texas explosion, it has been the cause of numerous other workplace fatalities, and could delay efforts to prevent another tragedy like West.

For instance, four years before a tragic explosion in West Virginia’s Upper Big Branch mine as a result of coal dust build-up, the U.S. Chemical Safety Board issued a report recommending that the Occupational Safety and Health Administration (OSHA) write a rule to prevent the accumulation of combustible dust. But it was not until 2009 that OSHA began the process of gathering information to write a rule. Then in 2010, OSHA downgraded the rule to a “long term action,” delaying the draft rule's required approval by a Small Business Advocacy Review Panel (SBARP). On April 5, 2010, the coal dust at Upper Big Branch sparked, and the resulting explosion killed 29 miners.

Keith Wrightson, worker safety and health advocate for the watchdog group Public Citizen, says, “Based on previous experience with OSHA, it is likely that it will take 8 to 12 years to issue a final rule for combustible dust.”

Another hitch in the rulemaking pipeline is the White House Office of Management and Budget (OMB), which, along with the Small Business Administration (SBA) and OSHA, is charged with approving draft rules within SBARP. A newly released report by the AFL-CIO titled “Death on the Job: The Toll of Neglect” accuses the the OMB of “blocking needed protections.” The report notes, “As a result [of OMB delays], at the end of its first term, the Obama administration had issued fewer major OSHA rules than were issued by the Bush administration.”

Workplace safety advocates say things aren’t supposed to work like this. Federal statutes dictate that the OMB can only review proposed rules for 90 days unless granted a 30-day extension by the OMB Director. The OMB has held up the silica rule, which would limit workers’ exposure to the cancer-causing dust, for two years. According to Centers for Disease Control and Prevention (CDC), 1.7 million workers are exposed to silica dust on the job, primarily in the construction and mining industries.

The rule is currently being reviewed by the Office of Information and Regulatory Affairs (OIRA), the subsection of OMB charged with cost-benefit analysis of high-impact regulations, but OMB has not given a reason for the delay. Some workplace safety experts, such as Public Citizen’s regulatory policy advocate Amit Narang, suspect that OIRA is holding up the rule out of fear of angering business.

The White House did not return request for comment for this story.

But U.S. Senator Richard Blumenthal (D-Conn.), chair of the Senate Judiciary Subcommittee on Oversight, Federal Rights and Agency Action, is demanding answers from the OMB.

“Cost-benefit analysis can play an important role in policymaking,” Blumenthal wrote in a letter on May 7, 2013 to OMB Director Sylvia Mathews Burwell. “However, when proposals get seriously delayed at OIRA it undermines the credibility and legitimacy of the Office as an independent arbiter.” Blumenthal notes that of OIRA’s 153 open reviews, more than half have gone over the 90-day limit.

“I’m writing OMB to remind the agency that there are human costs to delay,” Blumenthal said in a statement about his letter.

Workplace safety advocates agree, saying that with over 1.7 million workers exposed to silica dust, it’s imperative that the rule be issued right away. The AFL-CIO’s Occupational Safety and Health Director Peg Semanirio calculates that for every year the silica rule is delayed, 60 workers will die as a result of silica exposure.

“Given the health and safety implications of these agency actions, the length of delay in OIRA’s review is unacceptable,” wrote Blumenthal. “Undue delay in the rulemaking process poses costs on the public, creates uncertainty in the industry, and reflects poorly on OIRA’s role in the regulatory process by giving the impression that life-saving public policy is being bottled up for political reasons or due to pressure from special interest.”

Workplace safety advocates applauded Blumenthal for taking the White House to task on the regulation’s delay.

“People are fed up that regulations can just disappear at OIRA, without any kind of accountability. It’s just not how it’s supposed to work. Thousands of workers are sickened every year the silica rule is delayed, and that’s unacceptable,” says Narang of Public Citizen. “It’s terrific to see members of Congress hold the administration’s feet to the fire, because the president has made a lot of pledges on protecting the public and being transparent that just haven’t been fulfilled.”