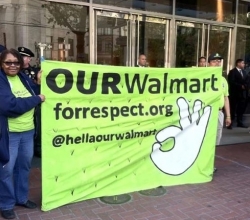 On Sept. 5, 2013, Walmart workers rallied for better pay and the right to organize in outside the San Francisco Four Seasons, home of board member Marissa Mayer. (Photo by R.M. Arrieta)

SAN FRANCISCO—With Bob Marley’s “Get Up, Stand Up For Your Rights” blasting in the background, about 150 loud and raucous Wal-Mart workers and local union supporters marched down Market Street in downtown San Francisco on Thursday toward the Four Seasons hotel, where Wal-Mart board of director member and Yahoo! CEO Marissa Mayer lives in a penthouse apartment. When they arrived, they held a dance party with a message: Raise the wages and improve conditions for some of the nations lowest paid workers.

In addition to their own action, workers joined another earlier in the day at SF City Hall where immigrant-rights groups were rallying in support of a Due Process Ordinance to stop police collaboration with Immigration & Customs Enforcement.

“I think that we’re all in the same boat,” former Wal-Mart worker Jeanette Pendleton told ITT. “Once we start unifying and getting the solidarity going then things can happen. We can’t stay separate and expect things to happen for each individual. We’ve got to come together.”

The Wal-Mart protest was part of a nationwide effort in 15 cities to demand livable wages, fair working conditions, the right to unionize, and the reinstatement of workers who participated in a strike against the retailer in June.

Since June, nearly 80 workers have been illegally disciplined, according the United Food and Commercial Workers International (UFCW). More than 100 Unfair Labor Practices charges have been filed against Wal-Mart with the National Labor Relations Board.

“I’m here to be a part of the assurances that the associates will get their wages. I’m an ex-manager at Wal-Mart and I understand how the system works and I know what they do. They work their associates but don’t pay them a decent wage,” said Pendleton. She added, “We gave them a certain amount of time to hire back the associates who were terminated. These associates work very hard and they should hire them back.”

OUR Walmart, a coalition of Wal-Mart workers and organizers backed by UFCW, organized the nationwide protest in an effort to push the giant retailer to pay fulltime wages of $25,000 a year, or, $12 an hour.

Wal-Mart spokesperson Brooke Buchanan told USA Today that the protests were having little impact on the company's 4,600 U.S. stores.