‘We’re Putting Our Lives on the Line’: Northwestern Football Player on Why He Needs a Union 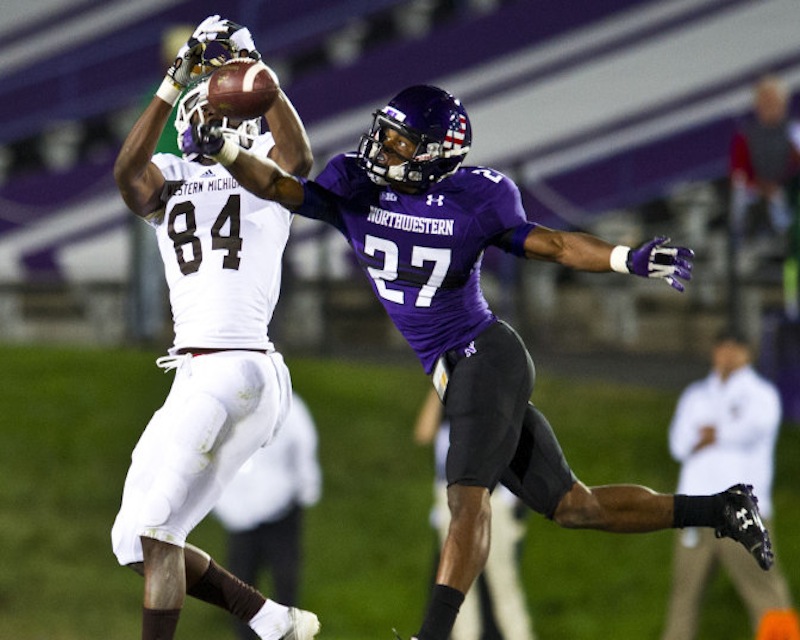 Northwestern football players are seeking union representation, which would allow them to bargain as university employees, challenging the NCAA's definition of 'student-athlete.' (NU Sports/ Creative Commons)

For the first time in the history of college athletics, NCAA football players are seeking union representation. On Tuesday, Ramogi Huma, president of the National College Players Association, filed a petition with the National Labor Relations Board on behalf of players at Northwestern University.

By organizing, the Northwestern players are effectively arguing that, like NFL players, NCAA athletes do play professional ball. Gaining union recognition would allow these athletes to bargain for rights similar to other university employees, such as workers’ compensation and the acknowledgement that they are more than simply “student athletes.”

The term “student athlete” has been used by the NCAA repeatedly to emphasize that college athletes are not employees and to bar them from receiving “undue” compensation. When questioned by PBS Frontline about the disparity between his $1.7 million salary and players’ lack of direct compensation, NCAA President Mark Emmert responded, “I can’t say it often enough, obviously, that student athletes are students. They are not employees.”

This semantic twist has, so far, been enough to keep players from receiving the same rights as workers. Many are on year-to-year scholarships; if a player is deemed no longer valuable to his team—which can mean anything from injury to poor performance on the field—even if his grades are stellar, his scholarship can be stripped. And neither colleges nor the NCAA are required to care for athletes who experience conditions, like brain trauma, that manifest after a player graduates. (Both the NCAA and the NFL have come under fire for being reluctant to admit or address the long-term physical trauma associated with the sport they sell.)

Will Hampton, a senior defensive lineman at Northwestern who says he did not sign a union card but does support unionization, sees organizing as a way to secure medical treatment in the event of football-related injuries (of which Hampton has had a couple). “Every time we step on the practice field, we’re putting our lives on the line,” he says.

Their hard work pays off, even if they don’t share in the profits. The combined revenue of the pre-season top 25 teams in 2012 was an astounding $1.24 billion, and coaches were paid an average of $1.64 million a year, a number that has risen considerably over the course of the last decade—and continues to rise—in spite of tuition hikes and staff furloughs. And while players receive valuable scholarships, and some get stipends to help with living expenses, they see none of the actual revenue that their playing brings in. If a player’s jersey is sold, the NCAA and the school get paid. Given the astronomical profits, it’s unsurprising that players are questioning their value. “They make a lot of money off of us,” says Hampton. “And for us to see none of it, I mean, you kind of feel a little exploited.”

The NCAA’s press release Tuesday in response to the union drive underscored the “student athlete” argument, asserting that “this union-backed attempt to turn student-athletes into employees undermines the purpose of college: an education. … Many student athletes are provided scholarships and many other benefits for their participation. There is no employment relationship between the NCAA, its affiliated institutions or student-athletes.”

The National College Players Association (whose goals are outlined here) disagrees. For the last decade, the organization has been calling attention to and organizing around injustices that college football players face, paying special attention to brain-related injuries and unfair punishments, such as the stripping of scholarships. This fall, football players at Northwestern, Georgia and Georgia Tech sported the hashtag #APU—short for All Players United—taped to their wrists in a silent call to reform NCAA practices. The union drive, however, is an unprecedented step.

Dave Zirin, sports columnist at The Nation and author of Game Over: How Politics has Turned the Sports World Upside Down, sees the Northwestern team as knocking over the first domino. “It’s not unlike the waiting for the first athlete to come out of the closet,” Zirin notes. “This is going to stir a very concrete kind of grassroots activism. It’s going to inspire other college football programs to look to the National Collegiate Player’s Association, to look to the [United Steelworkers, which is backing Northwestern’s union drive], to look to the unions who have put themselves out there and said to players that they would work with them.”

If the unionization effort at Northwestern were successful, student athletes at the 17 private universities that are part of the NCAA Division 1 Football Bowl Subdivision (FBS) would immediately be union-eligible. Zirin believes that this would set a legal precedent for athletes at public universities, and, soon enough, the NCAA might find itself having to confront the demands of those whom it exploits.

Legal experts, however, are less optimistic. Marshall Babson, counsel at Seyfarth Shaw LLP and a former NLRB member, says, “It would be a novel and significant turn in NLRA jurisprudence for the NLRB to hold that student athletes, without more, are employees and therefore covered by the act.” The labor board has gone back and forth on the related question of whether graduate teaching assistants are employees or students, but the most recent decision, a 2004 Bush-era ruling, said that they do not qualify as employees, as their relationship with universities is primarily educational rather than economic.

To Hampton, playing ball for Northwestern feels like a job, because of both the potential for injuries and the time sacrifice. “Because you are there on scholarship, you have to make your studies fit your football schedule,” he says. “I’ve had workouts at five in the morning and I had a paper due the next day. I’m up at one o’clock in the morning writing this paper, I had to really just take a nap and go do like a three-hour workout. … Any time you invest as much time as we do, I think you should be compensated.”