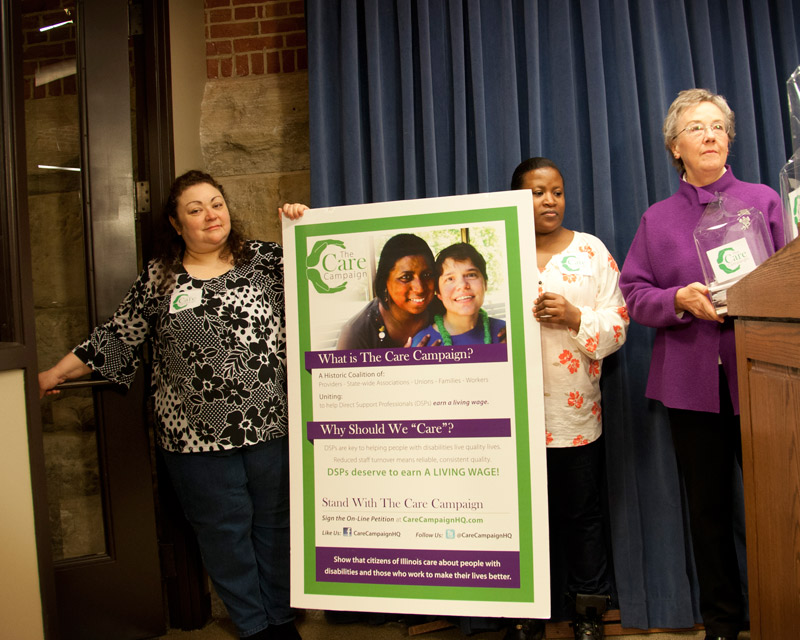 For the last 12 years, Tressa Wilson of Rockford, Ill. has worked full-time at a group home run by the nonprofit Milestone, Inc., caring for clients who have been diagnosed with intellectual disabilities, autism, epilepsy or cerebral palsy.

Wilson, 35, says that while she feels confident at her job and believes she is helping her clients, the work can sometimes be tough.

"A lot of people I work with are non-verbal,” Wilson says. “Sometimes you can’t tell what they want.”

Wilson says that because of communication difficulties like these, her clients can become frustrated and occasionally physically combative. Another challenge is that despite the intensive nature of her duties, which include dressing clients and coordinating outings, Wilson makes just $10.51 an hour—not nearly enough, she says, to support herself and her four children.

Along with the other care assistants at Milestone, Wilson recently decided to join AFSCME Council 31, which represents about 5,000 caregivers for developmentally disabled people at community agencies throughout Illinois. On Tuesday, the Milestone workers traveled with other Council 31 members to the Illinois capitol building to present Gov. Pat Quinn’s office with more than 10,000 signed postcards demanding a $13-an-hour living wage for caregivers.

Wilson and her colleagues went to Springfield as part of the “Care Campaign,” a coalition of workers, CEOs of care centers, state lawmakers and disability advocates that formed in early 2013. Tuesday’s event, which gathered dozens of supporters, was the coalition’s biggest mobilization to date.

At the behest of the Care Campaign, State Senator Heather Steans (D) and Representative Robyn Gabel (D) introduced legislation in October calling for Illinois to raise the wage of direct support workers. According to the trade group Illinois Association of Rehabilitation Facilities (IARF), caregivers for developmentally disabled people currently earn an average of $9.35 an hour. Steans' and Gabel’s bills would boost that to $13 by July 2016.

So far, however, the bills have remained stalled in their respective committees. And although Quinn has been publicly focused on helping low-wage workers across the board by raising the state’s minimum wage to “at least” $10 an hour, he has yet to take a position on this legislation.

Care campaign members say they certainly want to see the state’s minimum wage increase. But they also contend that the specific plight of caregivers has reached a tipping point, thanks to years of insufficient support from state government.

Art Dykstra, a spokesperson for the Care Campaign and executive director of Trinity Services, which operates more than 80 community care facilities throughout Illinois, says that the governor’s office was “very hospitable and sympathetic” when he presented the group’s postcards.

But Dykstra adds that Quinn has been historically noncommittal about raising wages for caregivers. “[Representatives from the governor’s office] just say right now that the state is having economic problems … [but] they have said this for years,” Dykstra says. Messages left with the governor’s office Tuesday were not returned.

Most disability care centers in Illinois rely almost entirely on state money to function—leaving them in a particularly vulnerable position when elected leaders opt to reduce social service spending. Advocates hope that when Gov. Pat Quinn introduces his annual budget in March, which the state legislature will review this spring, he will opt to increase centers' funding.

“Unlike other businesses, these community providers cannot raise their prices, reduce their service hours or make other economic decisions about resources,” notes Janet Stover, president and CEO of IARF. “They provide these services within the confines of their agreements with the state.”

Dykstra, who has served as head of the New Lenox, Ill.-headquartered Trinity Services for 27 years, recalls, “There was a period of time where we would get rate increases every other year.”

Since 2007, though, the state’s allocated money for care service providers hasn’t been adjusted for inflation. In fact, during the past decade, funding has only increased a total of 9.5 percent. Meanwhile, as Dykstra points out, the consumer price index has shot up 23 percent over the same time span.

This stagnation came amid a flood of other budget cuts triggered by the Great Recession and state-specific crises. Disability advocates maintain, however, that caregivers and other public servants should not be forced to bear the brunt of the budget crisis. Because of these workers’ insufficient pay, supporters say, many of them go on public aid, thereby costing the state money. And the low wages can also lead to high employee turnover—a major problem in a profession where developing personal relationships with clients is vital.

Tony Paulauski, executive director for the advocacy group Arc of Illinois, says that Quinn has made some impressive moves to expand community care for developmentally disabled people—such as removing more than 3,000 people in the last two years off a state waiting list to receive publicly assisted care.

But Paulaski says that Quinn’s work on behalf of developmentally disabled Illinois residents means that the governor must, in turn, do more to support their care providers. “There is going to be growing demand,” Paulaski says. “This is about quality of life issues for people who need these care supports.”

AFSCME is a sponsor of In These Times.