Together, New Haven Activists and Leaders Strike Back Against Wage Theft 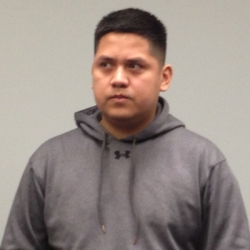 Julio Olivar is one of two dozen Gourmet Heaven workers who say they were cheated out of their wages by owner Chung Cho. (Melinda Tuhus)

Last Wednesday in New Haven, Conn., labor activists and workers joined police and government leaders at a news conference announcing their shared commitment to stopping employers from stealing the earnings of their mostly low-wage workers.

Wage theft—paying employees less than the minimum wage or not paying overtime when required by law—is widespread throughout the country. A recent report by the National Employment Law Project found a quarter of low-wage workers interviewed in several cities had been paid less than the minimum wage in the previous week; three-quarters had worked more than 40 hours a week without being paid overtime.

Too often, employers found guilty of wage theft slip through the judicial system with little more than a slap on the wrist. But in New Haven, city officials are taking significant steps to pursue criminal charges against those who shortchange their workers.

This week’s press conference was prompted by the recent arrest of Chung Cho, owner of the regional deli chain Gourmet Heaven. Cho faces 21 felony charges of violating wage payment requirements, 20 misdemeanor charges of defrauding alien workers of wages, and one felony count of first-degree larceny for allegedly cheating more than two dozen workers out of about $200,000 over several years. In July 2013, a Gourmet Heaven employee filed a complaint with the state labor department; after an investigation, Cho agreed in November 2013 to a settlement of $140,000 total.

Three months later, Cho still hadn’t paid up. In fact, workers claim he fired four employees who spoke to a Department of Labor representative, prompting a separate retaliation investigation that is still under way. Finally, a labor department investigator got the state to issue an arrest warrant, which the New Haven police served.

It was the first time local police have ever levied larceny charges against employers in cases such as this; labor advocates say authorities had not made prosecuting wage theft a priority in the past.

Julio Olivar, one of Cho’s employees, worked at Gourmet Heaven for seven years. According to a statement he gave the state labor department, he and 20 other workers were paid less than minimum wage and denied overtime pay for 72-hour work weeks.

At the conference, he said he hoped the case would inspire other local employers to treat their workers justly. “I don't wish for Gourmet Heaven to close down or for anything [to] happen to my friends who work there,” he said. “All I wish is [for] better treatment—for not just Gourmet Heaven workers, but for all of the workers in New Haven.”

Cho’s arrest came after months of pressure from labor advocates and grassroots allies. Local activist group Unidad Latina en Acción (Latinos United in Action) led weekly picket lines outside Gourmet Heaven for six months after the wage theft came to light, along with students from Yale University and Yale Divinity School. Before they began picketing, Unidad Latina also tried to negotiate with Cho, to no avail.

After the conference, Unidad member Megan Fountain said she hoped other police departments would use the larceny statute to prosecute employers who allegedly steal from their workers. After all, she pointed out, standing up for workers doesn’t require lengthy battles in state legislatures. “Some advocates think that you need to pass legislation in order to criminalize wage theft,” she said. “In Connecticut, we found out we don’t need to pass any legislation, because wage theft is already illegal.” Though other cities have tried to prosecute wage theft, Fountain said, officials often need a push from a grassroots movement to make it happen.

And although activists were certainly encouraged by Cho’s arrest, he’s not the only employer guilty of wage theft in the city. With that in mind, Unidad member Luis Ramirez encouraged workers, business owners and local leaders to hold steady in the fight for fair worker wages.

“My message to workers is to always keep a record of the hours they work, in case they need to file a complaint against their boss,” he said. “My message to the employers: Pay always a fair wage, because we work hard and we deserve a fair living with dignity. A message for our police department and local government and state government: Please help us out in order to recover the stolen wages for a fair living for us and our families.”

Several local leaders and police officials at the press conference said they’d prefer employers just do the right thing so they wouldn’t have to be criminally prosecuted. But they also emphasized that when bosses try to cheat their workers, law enforcement would bring down the hammer.

On a national level, undocumented workers are the most vulnerable to wage theft because they are least likely to report the crime. But police and Department of Labor representatives at the press conference also made clear they would defend the rights of all workers, regardless of their immigration status.

Jorge Perez, president of the city's Board of Alders, helped coordinate the efforts of the state, the police and the workers and their supporters. At the press conference, he said he had mixed feelings about Cho’s arrest. On the one hand, he admitted, “I want every business in this city to succeed, to be profitable and to be able to grow.”

At the same time, he maintained, economic success shouldn’t hinge on worker exploitation. He pointed out, “I also want [businesses] to [grow] in a way that does not take advantage of their employees and is not done on the back of those people who do most of the work.”

This story has been adapted from a piece that originally ran on Free Speech Radio News.