Will Bruce Rauner Be Scott Walker 2.0 for Illinois Unions? 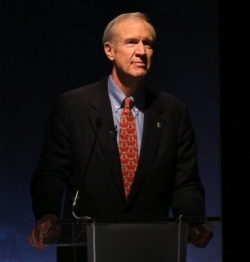 Even in Illinois, with its supermajority Democratic state legislature, public employees have still had their fair share of feuds with Democratic Gov. Pat Quinn over austerity measures, most notably a recent cut to public worker pensions. But since World War Two, when workers started organizing in earnest, Illinois has not faced a governor ideologically opposed to public-sector unions.

If he’s elected this year, Republican gubernatorial candidate Bruce Rauner could change that.

A venture capitalist from Chicago’s tony North Shore, Rauner has regularly argued that public employee unions bear the blame for Illinois’ financial and education problems. In a November 2012 Chicago Tribune editorial, Rauner opined that Illinois is “in a long-term death spiral” thanks to legalized “bribery” between elected officials and public sector unions. He has also badmouthed “union bosses” and often expounds on the benefits of union-free charter schools.

Meanwhile, Rauner’s largely self-financed campaign—he has spent $6 million of his own money, and has raised more than his three GOP primary rivals combined—is cruising toward the Republican nomination for governor. An Illinois Manufacturers’ Association poll released last week had Rauner getting 36 percent of the GOP primary vote, with State Sen. Kirk Dillard the four-person race’s runner-up at 17 percent.

Illinois’ primary is March 18, and the GOP winner will almost certainly take on Quinn, who replaced Rod Blagojevich as governor in 2009 and then won the election in 2010. The Washington, D.C.-based Rothenberg Political Report has judged a Quinn-Rauner race to be a “toss-up.”

In light of this potential faceoff, public sector unions throughout the state have already begun to mobilize against Rauner. This week, the Illinois Federation of Teachers announced its endorsement of Dillard for the GOP primary. It is just the second time in the union’s history that it has endorsed a Republican candidate for governor; the state’s other main teachers’ union, the Illinois Education Association, also backs Dillard.

IFT President Dan Montgomery called Dillard a “tireless advocate for pubic schools.” But IFT also made clear that its approval of Dillard will not necessarily extend beyond the primary. Instead, the union seems to be taking every opportunity it can to work against Rauner.

“I don’t think that you can find a candidate in recent memory that is as outwardly hateful and hypocritical as Mr. Rauner,” IFT spokesperson Aviva Bowen tells In These Times.

Political consultant Rose says that even though Dillard is a long shot, IFT is wise to put money—the union has pledged at least $100,000 to the campaign—and mobilization behind him. “The Dillard cash creates a slender but worthwhile possibility [of Rauner losing],” Rose says, adding that the support will at least place more pressure on Rauner.

IFT has also given $250,000 to a political action committee called “Illinois Freedom PAC,” which has been solely dedicated to opposing Rauner. Though it formed just a month ago, the PAC has already raised $3.6 million as of Monday’s state board of elections filings. Donors include AFSCME Council 31, the state’s largest public workers union, which contributed $800,000. Unions representing mostly private sector employees, such as the United Food and Commercial Workers, have also pitched in, indicating their shared early oppositions to the candidate.

And the PAC is readily using those funds to try and discredit Rauner to Illinois voters. Its latest TV ad notes the Rauner-founded GTCR private equity firm owned a nursing home company that lost three patient-negligence civil lawsuits. Other PAC-financed anti-Rauner ads—and frequent union talking points—say the candidate made $53 million last year, owns nine homes, dubiously pulled strings to get his daughter into an elite Chicago high school and has flip-flopped on whether to raise or lower the state’s $8.25 an hour minimum wage.

Despite the concerns espoused in the unions’ anti-Rauner literature, though, one point has also become clear: Despite his lavish personal finances and vitriolic anti-organizing rhetoric, Rauner has not outlined any specific plan to hurt organized labor on his campaign website, in his limited press interviews or during debates.

Rauner has not, for example, proposed curbing collective bargaining rights like Walker did, or initiating a right-to-work law, like Daniels and Snyder. Though he has backed creation of “right-to-work” zones, where local governments could opt to adopt right-to-work laws, the candidate has stopped short of endorsing a statewide law outright. (Messages left with Rauner’s campaign for this story were not returned.)

And when it comes to pension cuts, the number one issue facing Illinois public employees of late, Rauner’s opinion likely won’t determine the outcome either way. Many of the same public employee unions financing Illinois Freedom PAC sued Quinn for signing into law last December a landmark bill that cuts Illinois’ public worker pensions. For his part, Rauner has said that law does not go far enough in cutting pensions and shoring up the state’s finances. It’s unclear, however, what he could do on pensions now that the Illinois Supreme Court will likely decide the matter.

Nonetheless, Bowen of IFT argues Rauner has staked out a clear “anti-middle class and anti-union position.” That will translate into anti-union policy, she says, no matter that Rauner currently seems to lack a cohesive strategy for doing so.

And statehouse observers feel that while Rauner may not have the impact of, for example, Scott Walker, who enjoys a Republican-majority legislature, he can still hurt unions.

“At first he can stop things from happening that public employee unions want to see happen,” says Kent Redfield, a professor emeritus of political science at the University of Illinois-Springfield. “And then he can get involved in legislative races and work with the state legislature.” In future elections, Redfield explains, Rauner could create political momentum and raise finances to elect anti-union legislators—who would, in turn, introduce bills that would be harmful to the labor movement.

Another potential snag, Redfield notes, is that if Rauner is elected, his office will be directly bargaining with AFSCME employees on their next contract. Last year, Quinn narrowly averted an AFSCME Council 31 strike when the union and governor hashed out a deal; when that contract runs out in June 2015, negotiations will have to begin anew.

AFSCME and other public sector unions played a big part in Quinn’s 2010 election, but then had several clashes with him, including the aforementioned pensions snafu and the legally contentious closure of state prisons and healthcare facilities. Now—barring a Dillard upset or the sudden appearance of a third-party candidate—those unions will likely return to supporting the incumbent governor.

“Given the choice between Quinn and Rauner,” Rose says, “Quinn will suddenly become labor’s hero.”

Full disclosure: AFSCME is a website sponsor of In These Times. Sponsors have no role in editorial content.