The First Blow to the NCAA Establishment: NLRB Rules Players Are Employees 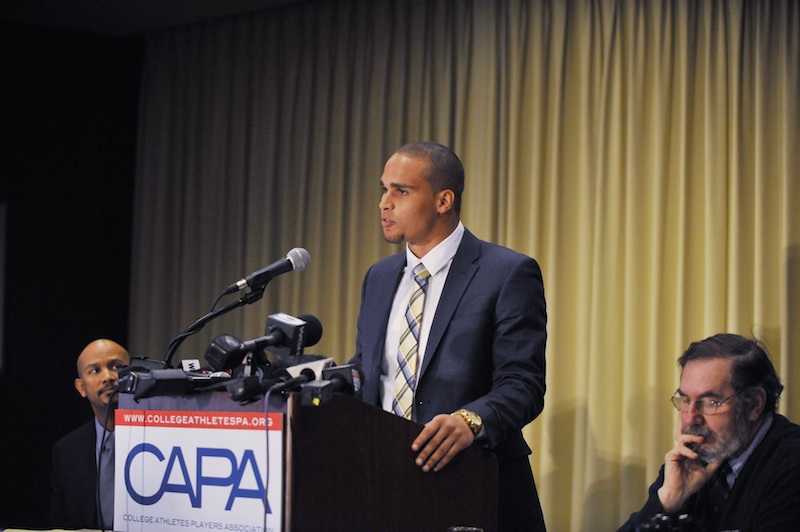 In a ruling that could have a ripple effect across the NCAA, the National Labor Relations Board found yesterday that football players at Northwestern University—who until now were considered no more than “student-athletes”—are in fact employees.

The NCAA has long been under scrutiny for its treatment of the players who generate college sports’ enormous profits. Players have historically only received payment in the form of tenuous scholarships and occasional stipends, while the average pay for NCAA coaches was a startling $1.64 million in 2012.

Public reactions to the NLRB’s decision swamped social media Wednesday night, with most NCAA football fans coming out in support of the players challenging the “status quo of college athletics.” Others openly called the athletes greedy, saying the move could damage college-level sports.

But former Northwestern quarterback Kain Colter, the face of the union drive, still sounded exuberant in a post-ruling interview with ESPN on Wednesday. “Today has been a huge success not just for Northwestern football players but for college players around the nation,” Colter said. “We should find great pride in that we’re taking steps on our journey to secure basic protections and basic rights.” Colter also highlighted three bread-and-butter issues that ignited the union drive: medical care in the event of injuries that manifest after graduation, academic support while in school and the securing of scholarships. While bargaining for actual pay is not currently on the table, unionizing does open the door for further negotiations. Down the line, the players could ask for anything from a share of uniform sales, the right to sponsorships and advertisements to wages.

Peter S. Ohr, the regional director for the NLRB’s Chicago offices, issued the ruling, which states that college football players qualify as employees under the National Labor Relations Act (NLRA) and are therefore entitled to vote on unionization. The ruling stipulates that only players receiving scholarships and who have not exhausted their playing eligibility are entitled to vote on collective bargaining. For his part, Colter believes the team will have no trouble securing the votes needed to unionize with the representation of College Athletes Players’ Association (CAPA).

The ruling eschews old NCAA semantics. The document does not refer to the players as “student-athletes” in its decision, a favorite term of the NCAA that has long been used to emphasize the “educational value” of playing college sports. It also calls Northwestern the “Employer” throughout. Ohr did not parse words:

Clearly, the Employer’s players perform valuable services for their Employer. Monetarily, the Employer’s football program generated revenues of approximately $235 million [from] 2003–2012 ... The Employer was able to utilize this economic benefit … in any manner it chose. Less quantifiable but also of great benefit to the Employer is the immeasurable positive impact to Northwestern’s reputation a winning football team may have on alumni giving and increase in the number of applicants for enrollment at the University.

Ohr also emphasized that the benefits the players receive from the university clearly constitute payment for their athletic performance. In the ruling, Ohr writes: “That the scholarships are a transfer of economic value is evident from the fact that the Employer pays for the players’ tuition, fees, room, board and books for up to five years.”

But there’s still a long way to go on the road to collective bargaining rights for the university’s “student athletes.” Both the NCAA and Northwestern quickly issued statements following the ruling expressing their disagreement with Ohr’s decision. And both organizations are expected to appeal the decision to the five-member NLRB in Washington D.C. If the players choose the CAPA as their representative, as they’re expected to, and the University refuses to bargain with them, the matter would go again before the NLRB, who would likely identify the refusal as unfair labor practice, which would then bring the case before Federal Court.

But regardless of the eventual outcome, the ruling is already raising eyebrows in the legal community. Marshall Babson, Seyfarth Shaw LLP partner and former NLRB member, notes, “If this decision turns out to be correct and turns out to reflect policy as decided by the NLRB in Washington, it will be a blockbuster decision.”

James Redeker, a partner at the law firm Duane Morris LLP who has been has practicing labor law for over 40 years, sees the decision as indicative of the aggressive style of this Obama-appointed NLRB board.

“This labor board has become an activist labor board, particularly in the application to non-union employers and non-union employees,” pushing the application of the National Labor Relations Act far beyond the boundaries laid out by prior boards, Redeker told Working In These Times. “It’s a great, great time to be a labor lawyer,” he says. “The world has gotten tipped on its head.”

While Redeker believes the D.C. NLRB will vote 3-2 in favor of upholding Ohr’s ruling, the fate of the decision remains unclear. Unionization could have a range of unintended consequences. Declaring that scholarships constitute payment for services, for example, could render them taxable, or introduce the possibility that any group of students that receives scholarships contingent upon some kind of nonacademic performance might seek unionization.

Whatever the eventual outcome and consequences, this ruling constitutes the first substantial blow to the NCAA’s grip on the rules and regulations governing college athletics. And it has the potential to impact the lives of college athletes nationwide.