West Virginia’s Water May Be Safer, But Mine Workers Could Still Be in Danger 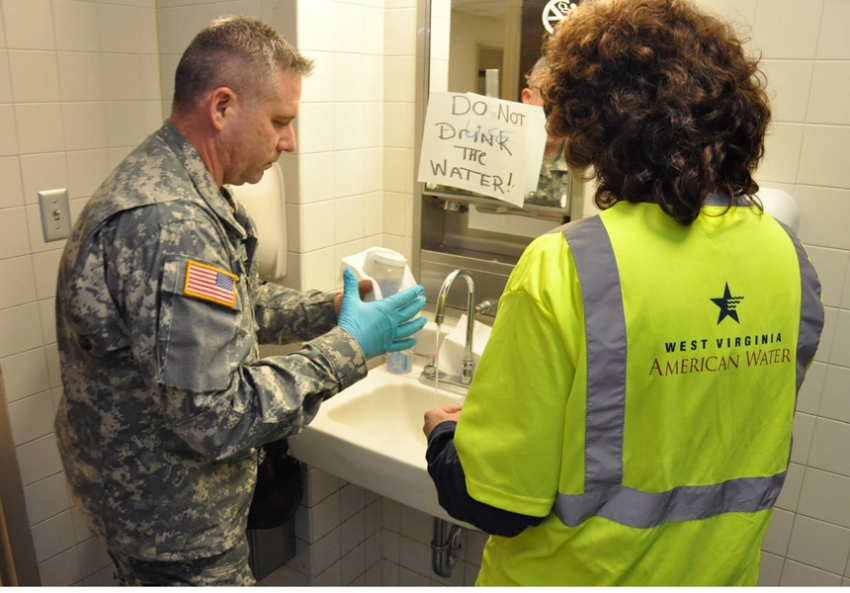 Joe Stanley, a former miner in West Virginia, is no stranger to MCHM (4-Methylcyclohexane Methanol), the licorice-scented chemical that leaked into the water supply of up to 300,000 West Virginians on January 9. Once it was eventually reported, residents in a nine-county region were warned not to use the water for any purpose. Even though the West Virginia American Water Company told the general public a few days later that the pipes had been flushed and the water was safe, many in the area still refuse to drink it today.

To some living around Charleston, the revelation that their water had been contaminated came as a shock. But as far as many activists are concerned, the spill was an inevitable result of West Virginia’s notoriously lax environmental laws. For example, West Virginia had no regulations covering inspection of aboveground storage tanks until this year, when a bill to address this oversight—and other aspects of the leak's aftermath—made its way to the legislature.

On March 8, in the last week of the legislative session, supporters of the bill rallied at the state capitol in hopes of preventing another such disaster. Stanley, who spent the last 17 years of his career surrounded by toxic waste leavings in a coal preparation plant, was one of them. He hoped that his experience with MCHM, and with the industry in general, would lend extra credence to his advocacy at Charleston.

Stanley worked at the Marrowbone Development Company in Mingo County, W.Va. In 1982, he was trained to "wash" the coal as a filter press operator. In addition, he says he was cross-trained in almost every job in the plant, giving him a good overview of the processes and chemicals used—including MCHM.

Marrowbone was not the company responsible for the MCHM spill in January; that was Freedom Industries, which stored it on the banks of the Elk River. But the chemical was present at Marrowbone during Stanley's tenure there, and it's still currently used at about 20 to 25 percent of coal prep plants around the state to “clean” metallurgical coal of some impurities.

"It creates a foam and catches fine particles of coal ... and ends up in the slurry—a heavy sludge product that's the result of cleaning coal," Stanley says of MCHM. Some of the slurry is injected into old underground mines, but much of it ends up in billion-gallon "impoundments," where Stanley says there’s a chance of a more catastrophic break. According to Stanley, as a filter press operator, he would have been more exposed to MCHM and other chemicals than most prep plant workers because he was in contact with the slurry on a daily basis.

He also says there was no indication on MCHM's Material Safety Data Sheets, intended to provide workers and emergency personnel with chemical handling procedures, indicating any toxicity or long-term health problems with the substance. That doesn't mean it’s safe, however. Instead, it means that MCHM is just one of 62,000 chemicals that were grandfathered in for continued use under the Toxic Substances Control Act of 1976 because they were then deemed—with no proof—not to be hazardous. The Environmental Protection Agency has required testing for only 200 of them.

The result, Stanley points out, is that the regulatory burden is not on a company to prove its chemicals are safe, but on the public to prove they are not. "Workers are exposed to so many chemicals that, without a scientific study," he adds, "there's no way to know which of them are detrimental to their health, and to what degree."

In 1993, Stanley helped organize Local 93 of the United Mine Workers of America, which covered about 500 employees at the plant, as well as underground miners and workers in surface operations. He also became its first president. One of his first acts as union leader was to request that the Mine Safety and Health Administration and the National Institute for Occupational Safety and Health (NIOSH) do an investigation of chemicals—including MCHM—used in the mining process, which he guessed were leading to medical problems among workers.

"Some of our miners were having adverse health effects, and I'm talking nervous disorders, kidney failure, things of that nature," Stanley says.

After its initial walkthrough, NIOSH allegedly requested the workers’ contact information so it could conduct a long-term health study, but Stanley says the company refused to release it; eventually, the matter was dropped. Marrowbone declared bankruptcy in the early 2000s. A few years later, it reopened as a non-union shop.

Even decades after Stanley’s stint at Marrowbone, there’s still very little information about MCHM available to workers and the public. One global supplier's version of the Material Data Safety Sheet, released in 2006, simply reads, “No specific information is available in our database [sic] regarding the toxic effects of this material for humans,” though it does acknowledge the potential for irritation after skin or eye contact. Considering MCHM’s prevalence throughout the state and the wide-ranging consequences its spill had earlier this year, however, Stanley hopes that the legislature will enact policies mandating industry-wide transparency about the chemical.

And at least in the short term, Stanley’s advocacy—along with that of the other supporters gathered at Charleston—seems to have paid off. The West Virginia legislature did pass March 8’s bill, though it is far from the regulatory overhaul many environmentalists and workers’ advocates say the state needs. The bill includes stricter permit requirements for companies that want to store chemicals aboveground, mandating greater enforcement and inspection in areas around drinking water intakes. It also requires early warning monitoring systems for some contaminants to be installed in large water utilities throughout the state. On April 1, Gov. Earl Ray Tomblin signed the legislation into law.

This is certainly a great first step in terms of improving the state's safety standards. But as far as workers are concerned, there’s still a lot of progress to be made. After all, though the bill will hopefully limit the general public's contact with harmful chemicals, many employees within the mining industry spend their days surrounded by toxic leavings. In addition to establishing more stringent regulations, the new legislation commissions the Bureau of Public Health to enact a study of the long-term health effects of January’s leak; Stanley hopes the endeavor will help to shed light on MCHM as a whole, in turn potentially leading to improved safety protocols for those exposed to it on a daily basis.

In the meantime, he says, he’ll be closely following the work of independent researchers looking into the spill—especially concerning the consequences of MCHM’s interactions with other mining chemicals.