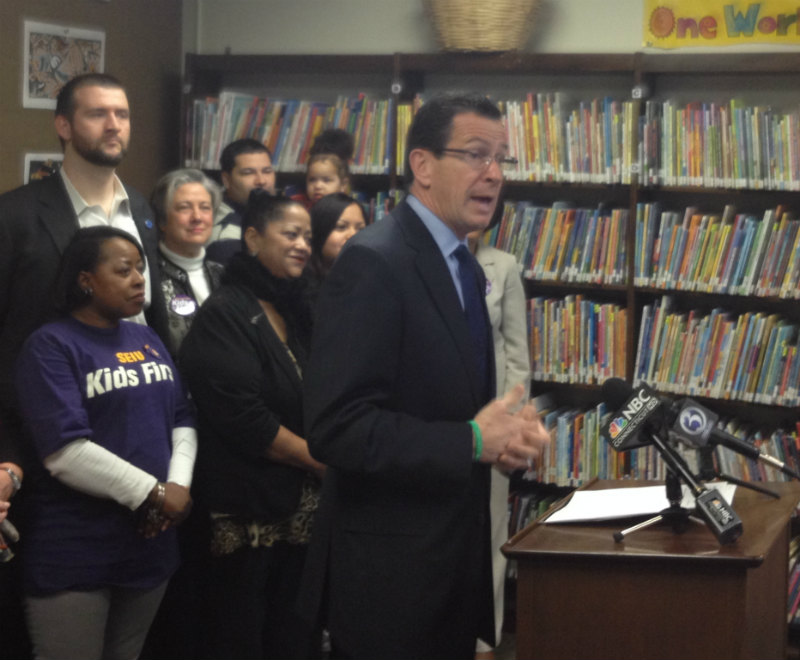 On June 30, the Supreme Court ruled in Harris v. Quinn that home healthcare workers in Illinois who declined to join the Service Employees International Union representing them did not have to pay a “fair share” provision for the benefits they’ve reaped from the organization. Technically speaking, the Supreme Court only considered Illinois care employees in its decision; however, activists fear that the ruling has potential consequences in a variety of sectors—and care workers in other states are watching the fallout especially closely.

Those in Connecticut have particular cause for concern. The day after the Harris v. Quinn decision was announced, the first-ever contract for 6,500 home care staff in the state came into effect. And the similarities between the situation in Connecticut and the one in Illinois are not lost on the Connecticut care workers’ union, SEIU1199, or its potential foes.

In Illinois, the workers in question were considered “partial public employees,” because they receive payment through Medicaid but take care of clients—often their own family members—in the clients’ own homes. This was prompted by a 2009 executive order from Gov. Pat Quinn (D) classifying home care workers as state employees for the sole purpose of unionization, but excluding them from other state benefits. From the Supreme Court’s perspective, this discrepancy was enough to exempt them from paying administrative costs for their protection; fully public employees are still obligated under Abood v. Detroit Board of Education to do so.

In 2011, Connecticut Gov. Dannel P. Malloy (D) issued a similar order to Quinn’s 2009 decree giving home care workers the right to bargain collectively. Though the conservative Yankee Institute for Public Policy and assorted individual consumers of home care services were quick to challenge Malloy’s order, the Connecticut Superior Court upheld it. The next year, the Connecticut legislature codified and expanded the order, specifying that consumers can hire and fire their unionized personal care attendants. And like those in Illinois, those attendants do not receive any of the same benefits as state workers, though they are state-funded.

"Personal care attendants shall not be considered state employees,” the law explains. “They shall be exempt from any and all provisions of the general statutes creating rights, obligations, privileges or immunities to state employees as a result of or incident to their state service."

Moshe Marvit, an attorney and fellow at The Century Foundation, a progressive think tank focused on labor and employment issues, has written extensively about Harris for In These Times. About Connecticut’s decree, he tells In These Times now, “That sounds awfully similar to the Illinois law, so I would think that Harris would apply.” Indeed, since the ruling, Republican lawmakers in the state have begun clamoring in favor of that interpretation.

Such an extension could be devastating for the nascent union. Although Communications Director Jennifer Schneider reports that SEIU Local 1199 NE has about 2,400 members, its contract covers all 6,500 of Connecticut’s home care workers—and the local will rely on all their “fair share” fees to keep things running smoothly.

This is especially important, union leaders say, because the new contract is a vital part of improving prospects for home care providers.

Schneider says that the agreement includes a 50-cents-per-hour raise that will take effect for all workers by early August; restoration of a wage cut from last year; a labor/management committee; an anti-discrimination clause; a grievance procedure; paid time off; orientation and training; and a joint working group that will make recommendations and issue a report in 2015 on the best ways to provide workers’ compensation.  The contract also initiates a study of healthcare options for the workers, hundreds of whom have already gained access to health insurance through the Affordable Care Act thanks to union outreach and education, according to an SEIU statement.

And workers are confident that these improvements will extend to their clients, too. In a press release issued by the union the day of the Supreme Court decision, home care provider Betsey Wingate said, “Before we formed our union no one knew how difficult it was for consumers to find people to take care of them because the pay was so low and undependable.“

Wingate felt determined that care staff could overcome Harris’ potentially detrimental effect on the union’s progress. She continued, “When home care workers united and told our stories we made some real changes. I finally felt like I wasn’t alone and I had the power to make a difference in my life and my family’s life.  That isn’t going to stop because of this court decision. We won’t go back to those days. I’m going to keep fighting and stay united with my fellow home care workers.”

State Attorney General George Jepsen issued a statement immediately after the Harris ruling saying his office had filed an amicus brief in support of the union's position in the Harris case. He is reviewing the decision to see "what effect, if any, that Harris v Quinn may have on home healthcare workers in the state of Connecticut."

For now, Schneider says the contract is so new that, “Even our membership dues haven't taken effect yet, much less administrative costs. At this point we don't know how it's going to affect fair share fees for workers in Connecticut.”

The Harris v. Quinn decision applies to workers in Illinois and does not involve this bargaining unit.  But, because of the uncertainty created by the decision, we have decided not to collect fair-share fees.  We are determined to work together with the state and our allies to make whatever changes are necessary to strengthen and improve our state’s home care system, so that home care workers can continue to have a strong voice for good jobs and quality home care.