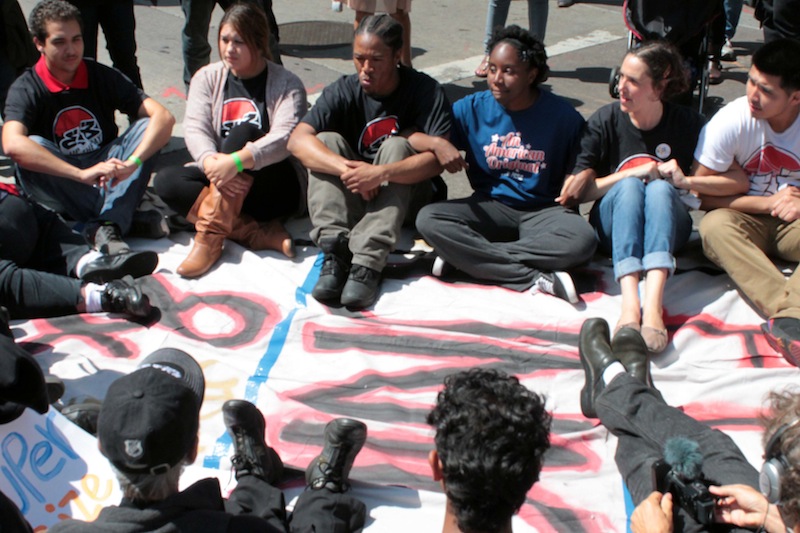 In Oakland, California, on Thursday, 150 workers and supporters took on the billion-dollar fast-food industry, urging companies like Burger King, McDonalds, Taco Bell, Jack-in-The-Box and others to pay their workers fairly instead of doling out poverty level wages. Fourteen people were arrested in downtown Oakland as they participated in peaceful civil disobedience. They were later issued citations and released.

“When I was younger, the thought of having money in my pocket [by working at Taco Bell] was big, but as you start to pay bills, you realize how little it is. That’s one of the first things I got used to when I got my job: being broke,” Alvaro Sandoval, a fast-food worker at Taco Bell in Oakland, told Working In These Times.

According to a 2013 report from the National Employment Law Project, the national median hourly wage for cooks, cashiers and servers is $8.94.

The strike was part of a one-day strike in 150 cities to call attention to fast-food workers’ fight for a $15-an-hour wage and the right to form a union, intensifying a two-year campaign that began in New York with 200 workers.

Silvia Ochoa tells Working in These Times that she has worked five years at a McDonald’s in the East Bay. She says she works a 40-hour week and brings home $600 every two weeks.

“My rent is $450, [then there are] the bills, the babysitting, food. The money doesn’t last.” She added, “we’re good hard workers. We want a better salary and better treatment. All we are fighting for is justice, and we are united in our effort to create a better life—for ourselves and for our children,” she said.

The growing fast-food worker movement started has begun to change the myth that slinging a burger is for teenagers looking for a little chump change. Instead, there’s a growing understanding that these low-wage workers are supporting families and are receiving little to no pay boost from the much-touted “economic recovery.”

Rep. Barbara Lee (D-Oakland) said in a statement, “No one working full-time should live in poverty or have to work two jobs to meet ends meet,” Lee said. “To re-build our economy and expand the middle class, we need to empower workers with a living wage that will put more money in their pockets.”

According to the Service Employees International Union, which is funding much of the effort, the movement has already had tangible effects. Since the campaign started, according to the union, nearly 7 million low-wage workers have seen their wages rise. In, Seattle the minimum wage is now $15 an hour  In San Francisco, Campaign for a Fair Economy helped put Prop J on the November ballot—a measure that would increase San Francisco’s minimum wage to $15 per hour over four years.

Thursday’s one-day strike also comes on the heels of several major legal victories that could allow workers to hold McDonald’s accountable for its labor practices.

Over the past two years, according to SEIU, McDonald’s has sidestepped demands for fair pay by claiming that franchisees, not the corporation, are responsible for adhering to labor standards. But in July, in response to 181 SEIU-backed complaints of unfair labor practices at McDonald’s, the National Labor Relations Board found that the company “is a joint employer that exerts substantial power over its’ employee’s working conditions.”

And in August, California passed a law—the California Franchise Relations Act—affirming corporations’ responsibility for franchisees’ treatment of workers, while also bolstering the rights of franchise owners to raise wages without penalty from its corporate overlord.

“Franchise agreements are so one-sided, franchisees have virtually no say in the businesses we’ve risked our life savings and dedicated years of our lives to build,” Kathryn Carter, a McDonald’s franchise owner, told the California branch of the SEIU when the law was approved. “Corporate headquarters control nearly every aspect of our business—we can be punished for speaking out or joining with other franchise owners to improve business conditions.”

The crowd roared back, “This is reality!”

As the workers marched toward an Oakland Burger King in Oakland, the Brass Liberation Orchestra, which often supports social justice marches with lively music, played along, adding a festive air.

Fast-food worker Alvaro Sandoval says the implications go beyond higher wages for burger-slingers: “I know deep down this is not just for our community but for workers all around the U.S. If we were to raise the minimum wage for fast-food workers, people would see it isn’t impossible for everyone else.”