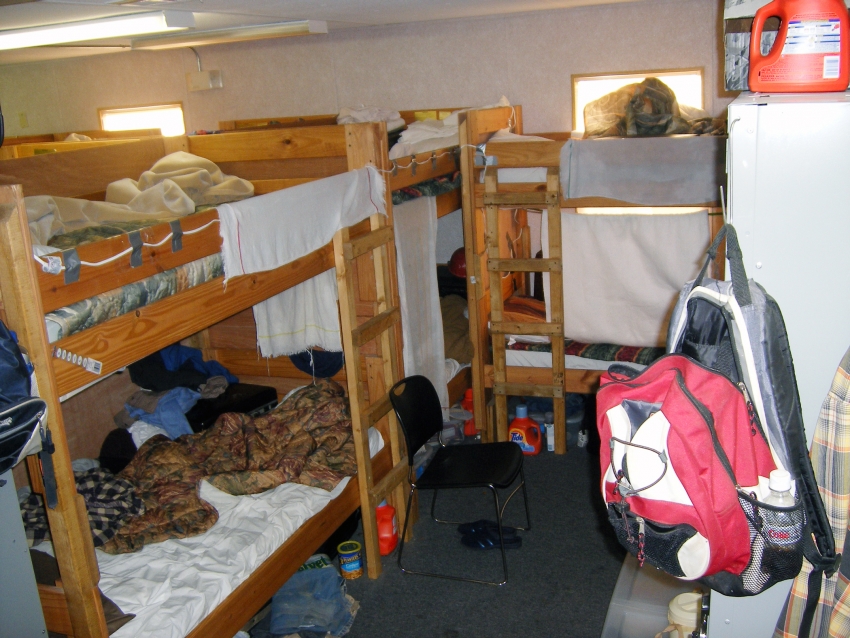 A scene from the "man camp" where workers were crowded into trailers. (Southern Poverty Law Center)

NEW ORLEANS—Yesterday, a jury awarded over $14 million in damages to the plaintiffs of David v. Signal International, the first of a series of lawsuits that together constitute one of the largest human trafficking and forced labor cases in U.S. history. After more than four weeks of testimony and several days of deliberations, the jury found that marine construction company Signal International and its agents engaged in human trafficking, forced labor and racketeering, among other violations.

It is “an historic verdict,” said Alan Howard, lead counsel for the plaintiffs, “finding damages against every defendant on every single claim that we brought, and finding punitive damages against every defendant for every claim for which we were entitled to ask for punitive damages.” Signal must pay over $12 million to the five plaintiffs, while the company’s recruiter and its immigration lawyer must pay over $900,000 each.

The original suit, filed on behalf of almost 600 Indian welders and pipefitters, alleged that the workers had been lured to the United States with false promises of green cards, which enable permanent residency. They paid $11,000-25,000 in recruiting fees for the opportunity, the complaint said, selling property, pawning jewelry, and taking out high-interest loans to finance the fees. The suit was brought by the Southern Poverty Law Center, a nonprofit civil rights organization, which enlisted the cooperation of several top law firms to litigate multiple cases pro bono after the original was not certified as a class action.

While the workers believed they were paying to immigrate permanently, they actually came to the US on visas for temporary work. In the aftermath of Hurricanes Katrina and Rita, Gulf Coast company Signal International brought in the skilled welders and pipefitters from India through the H-2B federal guestworker program. Under the terms of the program, H-2B visa holders can work only for the company that sponsors them; it is meant to help U.S. companies fill seasonal or temporary labor shortages. Signal said it could not find enough skilled workers domestically after the devastation and displacement of Hurricane Katrina, so in 2006 the company contracted with a network of recruiters and labor brokers to bring the Indian workers on H-2B visas to its worksites in Pascagoula, Mississippi, and Orange, Texas.

When the workers arrived, they were unpleasantly surprised to discover their accommodations: “man camps,” as they were referred to throughout the trial, where they were housed in trailers with 24 men and just two toilets each. They complained of unsanitary conditions, lack of privacy, and constant noise from proximity to the worksites, which operated day and night.

A man camp manager wrote in his private journal, “Our Indians have been dropping with sickness like flies. … Water has leaked everywhere and stagnated as a result, which serves as a bacterial breeding ground.” The Pascagoula facility had been built over a lead contamination site that Signal says was safe.

The men paid $35 a day—over $1,000 a month—for room and board. Signal says it did everything it could to make them feel at home, including hiring an Indian caterer to cook them three meals a day, adding a prayer room and a quiet room to the camps, and providing a bus to take them to Walmart and church. The camps were under guard 24 hours a day, which the company says was intended to protect workers’ belongings.

The plaintiffs, however, say they were the ones being monitored and that the guards conducted surprise searches of their belongings. Perhaps more rankling, they were at first not allowed to find their own accommodations—and when Signal did eventually relent on this point, it said the $35-a-day fee would be deducted from their paychecks whether they lived in the man camps or not.

The original suit, which was filed as a class action on behalf of hundreds of workers, named six defendants: Signal, a U.S. recruiter, an Indian recruiter, an immigration lawyer, and two labor brokers. When a judge denied class action certification, the suit was broken up into 12 separate lawsuits; this one, the first to be heard, ended up with only five plaintiffs and three defendants.

Nevertheless, the number of middlemen and the complexity of the connections between them illustrates the opacity of labor recruiting for the H-2B and other guestworker programs—and the diffusion of responsibility that comes from long labor supply chains.

All of the defendants painted themselves as innocent victims of their codefendants’ deception. Signal even filed cross claims against the other defendants. The jury did not find those defendants liable for the only cross claim to make it to the end of the trial, an indemnity claim that would have made them responsible for Signal’s losses.

Signal’s strongest claim to innocence may be that its codefendants advertised green cards and started collecting payments for them long before Signal was looking for foreign workers—as far back as 2003, before Katrina even hit. Much of the case pivoted on whether and when the company knew that the H-2B workers had been told Signal would sponsor them for green cards.

Lawyers for the plaintiffs, however, had clearly identified Signal as their chief target. While they sought compensatory damages against all defendants, they sought punitive damages only against Signal. (The jury awarded punitive damages against all defendants.) In closing arguments, Howard stressed the egregiousness of the false promise of green cards, which he called “the big scam.”

“So at the end of the day, you might actually decide,” he said of the other defendants, “…maybe they’re not responsible for the promises. But no matter what, Signal is. Signal authorized the promises, they benefited from it, they knew what they were doing.”

And while trafficking, forced labor, racketeering and fraud claims were brought against all defendants, Signal alone was sued for discrimination, unlawful retaliation, false imprisonment, and intentional infliction of emotional distress.

Just one of the five plaintiffs, Jacob Joseph Kaddakkarappally (or “Mr. Jacob,” as he was known throughout the trial), brought the last three claims. Those claims pertain to the fateful day of March 9, 2007. An attendee of a nearby church he attended had put Mr. Jacob in touch with local organizers about the problems the Indian workers experienced in the man camps. The organizers contacted the Southern Poverty Law Center, which sent a letter to Signal asking to have a discussion about the workers’ conditions.

An internally circulated email concerning the letter from Signal’s senior vice president read, “The next time some disgruntled employee barks, they’ll think twice about wasting their time again. Before the weekend is over, the Indians will know we’re not afraid to fight and so should their liberal lawyers.”

Indeed, before the weekend was over, in the dawn hours of March 9, Signal seized the men it suspected of organizing, locked them in a trailer under guard, terminated their employment and told them they would be deported. One man was so distraught he attempted suicide and had to be taken to the hospital while Mr. Jacob, who had seen him “bleeding profusely” after the attempt, remained locked in the trailer.

David v. Signal was tried in federal court, where jury verdicts must be unanimous. Nevertheless, after the jury returned the portion of its verdict finding Signal liable for every claim brought against it, lead counsel for Signal requested a poll of the jury: each of the nine jurors was asked by name, “Is this your verdict?” The mic went from juror to juror as each said “yes.”

The plaintiffs’ lawyers see the verdict as a victory not just for guestworkers but for all workers vulnerable to exploitation.

“We asked the jury for an award that would send a message” both to Signal and to other companies, Howard said. “I think the jury has done that.”