In Wisconsin’s Battle Against Right to Work, Labor Goes Through the Motions 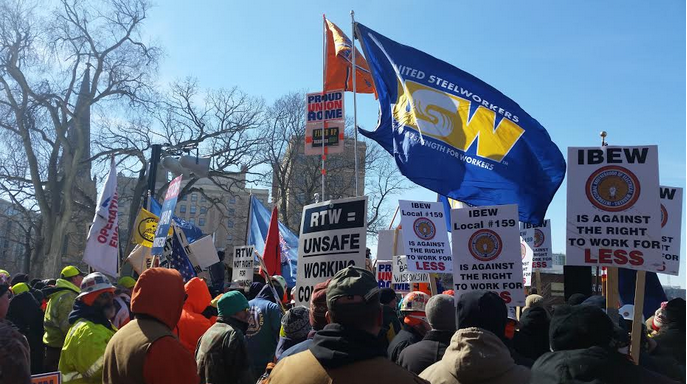 Two thousand union members packed the state capitol lawn in Madison on Saturday, but attendance was a far cry from the 100,000 who marched weekly during the thick of the Wisconsin uprising in 2011.   (David Goodner)

Over two thousand angry workers marched around the Wisconsin state capitol on a frigid Saturday afternoon February 28 to denounce Wisconsin governor and leading GOP presidential candidate Scott Walker’s latest round of union-busting legislation. But a bitter sense of inevitably was thick in the air.

It’s a bitterness to which the Left has become accustomed. And if organized labor continues to make the same mistakes they have made in Wisconsin over the last four years, the defeats will likely keep coming.

The bill was fast-tracked with almost no debate by a Republican-dominated state senate and is now set to move through the Wisconsin state assembly this week, to be signed into law as early as Friday by a governor who has tied his rising conservative political capital to his reputation as a politician willing and able to take on organized labor and win.

This almost certain defeat will mark yet another serious blow to the trade union movement, encourage copycat legislation in half the country, and further elevate Walker's national profile as a serious presidential contender ahead of next year's influential Iowa Caucus. Wisconsin, once one of the densest labor strongholds in the nation, will be turned into something of a union ghost town, with no public or private sector unions of significant size. Both employers and politicians across the country will be emboldened to attack workers' rights.

Labor has nobody to blame but themselves for the carbonite they seem frozen in. The uprising that swept Wisconsin in the winter of 2011 sparked the imagination of the nation precisely because it was a bottom-up movement of direct action. It had street heat: teacher sick-ins and walkouts, capitol occupations and mass protests. Hundreds of thousands of everyday people were inspired to join the fight.

But labor made a fatal mistake that it has stubbornly repeated ever since. Faced in 2011 with the option of escalating jobs actions and pushing forward to organize the much vaunted and near mythical general strike, union leadership instead made the calculated decision to demobilize the protests and funnel the movement into the courts and the ballot box. Labor leaders high-jacked the electric grassroots energy and promptly drove it straight into electoral politics, where the movement continues to be stuck.

Court challenges to Act 10, the 2011 law that eliminated collective bargaining and dues checkoff for public employees, failed. The recall election in 2012 and Walker's third successful election in four years in 2014 both diverted tremendous union resources away from workplace and community organizing and into campaign contributions, door knocking and phone-banking for lukewarm Democratic candidates like corporate moderates Tom Barrett and Mary Burke.

The results were predictable. Absent a mobilized mass movement to elevate real candidates, or at least give the ones we appeared stuck with some backbone, Barrett and Burke refused to even talk about workers’ issues, played it safe and steered their campaigns straight into mediocrity.

The same thing happened nationally in 2014. In response to progressives’ “Get Out the Vote” effort, the general public tuned out and corporate conservatives nearly took over. The 2012 presidential elections would have been equally bogged down if focus group pollsters had been allowed to steer the ship. The only reason 2012 was different was because the Occupy Wall Street movement’s brief mutiny caused enough of a ruckus to change the national conversation away from deficits and towards inequality, propelling President Obama into a second term.

The rank-and-file workers I spoke with at Saturday's rally were not ignorant of any of this, and disappointment was evident in people’s voices even as most enjoyed letting off steam in collective action with like-minded union brothers and sisters.

“Last time the movement was waylayed into Recall Walker,” said Babette Grunow, an elderly woman carrying a giant “General Strike” banner. “Now we’re not even in the right position to organize a general strike,” she said.

“Today's rally is a great start, but the movement isn’t ready for sustained direct action, and that's what we really need to win,” said David Williams, a retired AFSCME librarian. “Imagine if labor had put all that time and money they dumped down the drain on elections the last four years and had used it to actually organize the working class instead,” Williams continued.

To Williams’s point, it’s not hard to imagine under a different scenario labor unions turning in over one million petition signatures in January 2012 in support of direct action instead of a recall election.

There are still some signs for optimism, of course. Nationwide, labor unrest is increasing and some commentators say we are on the verge of a new labor militancy. It was good to see thousands of workers out on the streets in Madison again. People in the crowds spoke openly about the possibility of statewide strikes, including during several conversations I listened to afterwards as people warmed up at the nearby Michelangelo's Coffee House. I saw signs and overheard folks connecting Walker's union-busting to other parts of his corporate agenda, like massive tax breaks for big business and his newest budget proposal for millions in cuts to higher education. Many people carried banners and leaflets and sang chants calling for a general strike. Some young demonstrators carried red and black flags and a giant “Black Lives Matter” banner was prominently placed inside the capitol rotunda.

But overall, labor unions in Wisconsin and across the country are in retreat and about to take another catastrophic loss. What has happened in Wisconsin has not and will not stay inside state borders. The Republican governor in Illinois has already taken Walker’s ideas to a new level, circumventing the state legislature and using executive power to try and eliminate bargaining rights for public workers. Under the right conditions, absent a real populist movement everyday people can believe in, a conservative candidate like Scott Walker could realistically ice out a tepid Democrat like Hillary Clinton in a nationwide presidential contest.

Such an outcome is not inevitable. But to prevent it labor will need to start heeding the lessons of Wisconsin, and stop bringing snowballs to a gunfight.