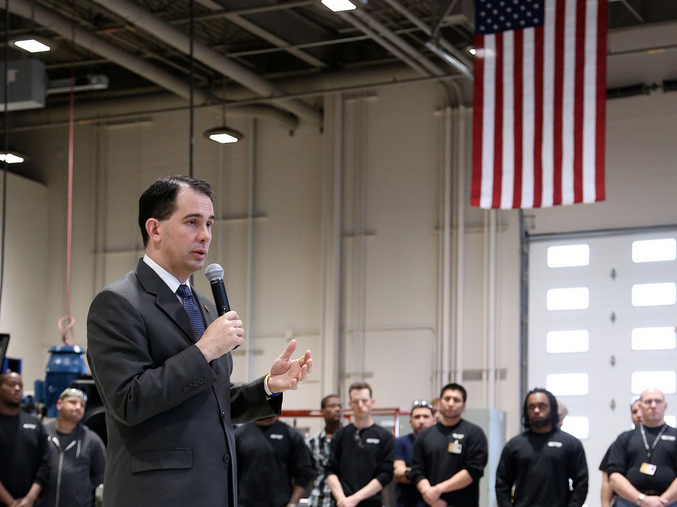 Walker addressing community college students in Wisconsin, assumedly pleading with them not to join a labor union after they graduate because union members are no different than terrorists. (Gateway Technical College / Flickr)

Every governor that wants to be president needs to exhibit their foreign policy street cred. Sarah Palin's attempts compelled the world to learn the proximity of Wasilla, Alaska, to Russia in 2008. Scott Walker made a similarly telling gaffe this week at the Conservative Political Action Conference in Maryland.

Walker, not grasping that his presidential aspirations mean people will pay attention to what he says, compared the Wisconsin protests of 2011 to the Islamic State, or ISIS, surprising no one with the level of disdain he feels for public employees.

"I want a commander-in-chief who will do everything in their power to ensure that threats from radical Islamic terrorists do not wash up on American soil," Walker told the crowd. "We need a leader with that kind of confidence. If I can take on 100,000 protestors, I can do the same across the world.”

The statement came as part of a rambling response to the question of, if he became president, how would the governor handle threats such as ISIS? Walker also said how, as a governor, he receives threat assessments from the FBI and, without divulging classified information, he has been concerned about ISIS for a long time.

Walker did not elaborate in the comparison, and the similarities are not readily apparent. The 2011 protests, in which thousands of protestors descended on the state capitol in Madison to fight against Walker's austerity budget and his attack on public worker's collective bargaining rights, were notable for their size and lack of violence.

The main methods of protest were the sit-in and picket signs. ISIS is infamous for its penchant for beheading, medieval tortures, and mass murder of civilians.

Although Walker is a virulent anti-worker partisan, it might do well to not assume malice when incompetence is a valid excuse, as Walker has a tendency to act without thinking about further ramifications. Last month, Walker used a Dropkick Murphys song as entrance music at a conference in Iowa. The band tweeted at the governor telling that they "literally hate" him, and for Walker to stop using the band's music.