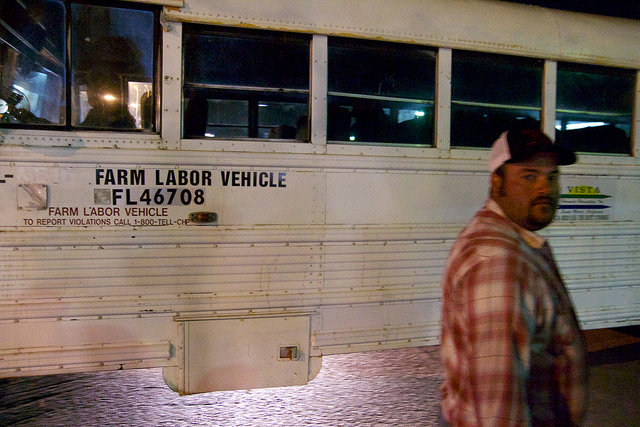 A Mexican guestworker boards a bus for the agricultural fields of Yuma, Arizona, in 2012. (Peter Haden / Flickr)

On March 4, the Department of Labor (DOL) announced, to little fanfare, the effective suspension of the H-2B federal guestworker program. The decision followed a Florida federal district court ruling that permanently blocked the DOL’s 2008 H-2B regulations, leaving the program without formal regulations. The court ruled in Perez v. Perez that the DOL lacks authority to regulate the H-2B program at all; the department responded by halting the activities that keep the program running.

The H-2B program brings foreign workers to the U.S. to fill temporary or seasonal labor shortages in an array of low-skill, nonagricultural jobs. Last year H-2B workers most commonly held jobs as landscapers, forestry workers, maids and housekeepers and carnival and amusement attendants. About 70 percent of them come from Mexico.

Despite the many abuses with which guestworker advocates charge the H-2B program, no one wanted it abruptly shut down. The suspension has both employers and workers scrambling to figure out what this means for the jobs they depend on.

“Workers are freaking out right now,” says Rachel Micah-Jones, executive director of migrant worker advocacy group Centro de los Derechos del Migrante (CDM). It is unclear how soon the freeze could affect H-2B employment. The program is likely to be suspended at least through April, if not longer.

That has industries that depend on H-2B workers freaking out, too. Thirty-three thousand visas are allotted for the six-month period beginning April 1. As of the last count, on February 27, only 14,740 of these had been granted—meaning over 18,000 visas are sitting in limbo. Trade association Western Growers said on its website that “the suspension will have devastating economic consequences on thousands of employers, their American employees, businesses that supply goods or services to seasonal businesses and local communities across the country.”

The Perez v. Perez decision is just the latest development in a long battle over H-2B regulations. The Bush administration issued regulations in 2008 that workers’ advocates considered weak and regressive. In 2012, the Obama administration issued regulations with much stronger worker protections: Employers would have to provide workers a contract, pay for their transportation costs to and from the U.S. and guarantee them at least three-fourths of the hours in their contracts, among other provisions.

“It’s a common practice to overrecruit workers,” Micah-Jones says, explaining the importance of guaranteeing hours, “and then you have a lot of workers who are sitting around paying rent to the employer.” (Many H-2B workers live on employer property—not always by choice.)

But many employers were displeased with the more stringent requirements. A group of H-2B employers and industry representatives, including the U.S. Chamber of Commerce, filed a lawsuit against the DOL claiming it did not have the authority to regulate the program and asking the court to block the 2012 rules. The Florida district court in Bayou Lawn and Landscape Services v. Solis agreed with the plaintiffs and enjoined the regulations.

It seems the plan backfired, however. While the program continued for a while under the laxer 2008 rules, employers had implicitly made the case against those regulations, too. Workers’ advocates soon brought a suit in the same court asking that the 2008 regulations be enjoined. On March 4, the court complied.

Micah-Jones says the claim that DOL does not have the authority to regulate the H-2B program has no merit. It is a worker program, she points out. “The Department of Labor has taken a role for years and years and years,” she says, “and their role was never challenged until employers were unhappy with the substance of some of the regulations in 2012.” In a separate case, the Third Circuit upheld the DOL’s authority to regulate the program.

In the meantime, CDM and other worker advocate groups are urging the DOL and DHS to jointly reissue the 2012 regulations or ones modeled on them. That would sidestep the authority dispute and provide workers with badly needed protections, they say. On Friday evening, DOL Press Secretary Xochitl Hinojosa said in a joint statement for the two agencies that they are working to issue regulations, although she did not comment on the substance of those regulations. The agencies aim to issue an Interim Final Rule for the program by April 30.

“DOL and DHS recognize the hardship that has resulted from the Court’s decision,” the statement said. “That is why the Departments are moving as quickly as possible to issue new regulations that would be consistent with the decision.”

Some employers’ associations, however, say the DOL did not have to stop administering the H-2B program at all. Western Growers called the suspension “seemingly retaliatory,” arguing that “the court did not order DOL to suspend processing labor certifications which the agency has routinely done ... for over 40 years without a rulemaking.”

DOL appeared to be acting out of an abundance of caution, noting that “the Departments must be mindful of other court decisions that have invalidated past subregulatory actions in the H-2B and related programs.”

What the regulations ultimately look like will matter more in the long run than when the program resumes. Just two days after the suspension of the H-2B program, the Government Accountability Office published a report on H-2B and its agricultural counterpart H-2A subtitled “Increased Protections Needed for Foreign Workers.” Whether DOL and DHS use this opportunity to establish better worker protections remains to be seen.