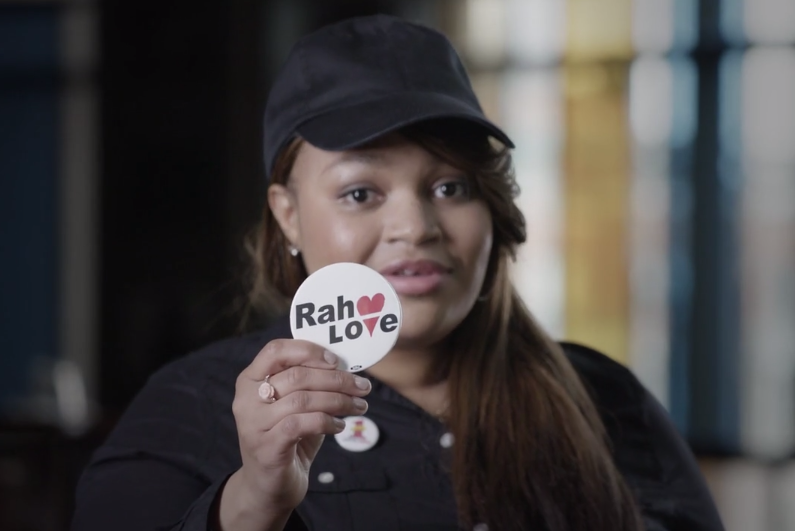 Of the numerous problems Rahm Emanuel is facing in his campaign for reelection as Chicago's mayor, two in particular stand out.

One, Emanuel is widely perceived as anti-worker and anti-union while being a close ally to the city's financial elites. (He used to work as an investment banker, after all.)

Two, he's widely acknowledged as being a jerk. He sends dead fish to people he's angry at, he yells "fuck you" to teachers union leaders, he allegedly screams in mental health activists' faces, stories about public photos with him include a description of his eye contact as like a "deathly vampire stare."

Emanuel has tried to mend that image a bit lately, acknowledging he isn't the nicest guy in Chicago politics. But no matter how fuzzy his sweater, he's still viewed as a prickly character. And despite some local unions' words to the contrary, he's seen by many as an anti-labor "Mayor 1%."

How can those two problems be solved ahead of Emanuel's April 7 showdown with progressive challenger Jesus "Chuy" Garcia? The hospitality workers union UNITE HERE Local 1 has an idea: an ad campaign with workers emphasizing "Rahm Love."

The union, which has endorsed Emanuel (and of which, full disclosure, I was briefly a member in 2010), rolled out a new ad campaign today in which local hospitality workers, all women of color, talk about the mayor and their feelings of "Rahm Love."

"Rahm Love," one unidentified worker says. "It's how the mayor fights so that hotel workers earn a decent living. We have health insurance, pensions, and sick days off. We have Rahm Love."

The video's message is a bizarre one for a union that has made worker militancy a central part of its campaigns in recent years, regularly going on strike and engaging in civil disobedience. The union’s Congress Hotel strike in Chicago, for example, was the nation's longest, lasting a decade before Local 1 called it off in 2013. That tenacity—which could be seen in the union’s willingness to chase the hotel’s owner and customers everywhere from a 5K race on the city's Lakeshore bike path to the owner's residence in Switzerland—gave the union a fearsome reputation among politicians and business owners around the city.

But in its commercial, UNITE HERE doesn't give credit to its own stubborn work raising Chicago hospitality workers' standard of living in recent years. Instead, the ad seems to credit Rahm—and “Rahm Love”—with the gains.

In another video, an unnamed airport worker states, "Rahm's a tough guy who stood up for us and raised our pay. Rahm Love feeds the kids and respects my work."

While it isn't immediately clear what pay raise the worker is referring to, the mayor has touted the city's commitment to increase the minimum wage to $13 per hour by 2019—one of numerous victories won by the city's grassroots movements that Emanuel has taken credit for in recent ads.

The union announced the commercials (all of which can be viewed here) at a press conference with the mayor this morning at the union's office. According to the Chicago Tribune's Bill Ruthhart, when asked by a reporter at the event about contributions from wealthy donors, Emanuel, surrounded by rank-and-file hospitality workers, responded, "None of these people look like Ken Griffin to me."

Griffin is a billionaire hedge fund founder who has donated almost $1 million to Emanuel's campaign and previously gave $2.5 million to Gov. Bruce Rauner's campaign. Griffin has been called the "patron saint of [the] union-busting ‘right-to-work-for-less' movement" by the community and labor coalition United Working Families, which is working to defeat Emanuel.

The ads come after the SEIU Illinois State Council's recent decision to reverse its previous stance of neutrality in the race, endorsing Garcia and paying for a new ad that slams the mayor for widening the gap between the city's richest and everyone else. Perhaps UNITE HERE was hoping to provide a labor voice to counteract the ad's message.

Or perhaps the ad was already planned. UNITE HERE Local 1 has, after all, backed the mayor since the campaign season began, and a number of red-shirted members and staffers could be seen standing directly behind Emanuel as he gave his speech on election night.

Local 1 could stand to gain from a number of Emanuel’s key development plans in the near future.The mayor emphasized in last week's debate with Garcia that he wants to see a casino in Chicago, which he has discussed for years. In 2012, referring to the casino, Emanuel stated, "I want it for our kids." Likewise, the mayor has pushed a widely condemned development in the city's South Loop that would use the city's public money, in the former of tax increment financing (TIF) funds, to construct a new hotel and basketball arena for DePaul University, a private college.

A union spokesperson did not immediately respond to a request for comment on Local 1's stance on the casino, hotel, or basketball arena.

Whether the “Rahm Love” is enough to reverse voters’ perceptions of the mayor will be seen on April 7. At the very least, though, Emanuel’s children will be watching the ad. According to DNAinfo's Ted Cox, when asked by a reporter if the runoff campaign changed any of Rahm’s family’s spring break plans, the mayor seemed to indicate that his children's vacations would be spent watching the commercials.

"Right now, spring break is down to their seeing 'Rahm Love' commercials and asking where their love is," Emanuel said.