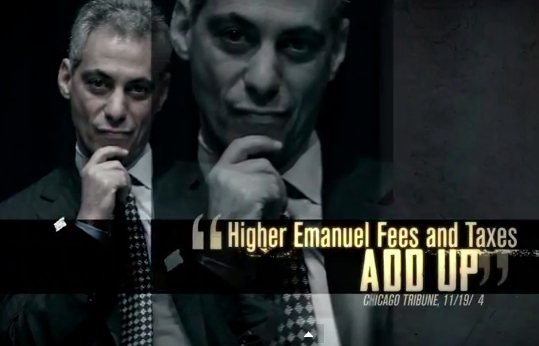 The ad, funded by the Service Employees International Union (SEIU) Illinois Council PAC, comes just over two weeks ahead of the historic mayoral runoff election between Emanuel and Garcia on April 7, in what is widely being viewed as a national referendum on neoliberal, corporate-centric governance—and the future of the Democratic Party.

Two different visions of Chicago are contrasted in the ad, one high above the gleaming skyscrapers of downtown and another in the city’s neighborhood streets, where, “under Rahm Emanuel, we’ve seen nearly 10,000 shootings, 50 neighborhood schools shut down, and a mayor who hits working people with higher taxes and fees while giving special tax breaks to his friends at the very top.”

Emanuel’s record on education and public safety is widely unpopular among Chicago residents, and this ad pulls no punches in going after the mayor where he is most vulnerable, while also linking him to sweetheart deals with corporate interests and wealthy campaign contributors.

Featuring markedly higher production value than previous pro-Garcia commercials, the TV spot illustrates the impact of SEIU investing significant funding less than a week after formally endorsing Garcia. The Chicago Sun-Times has reported that SEIU could spend over $2 million on the race in what will be a major boon for the Garcia campaign.

Also on Friday, Garcia announced his support for a national financial transaction tax (FTT), along with other progressive revenue-generating policies, at an event marking his endorsement by newly elected Illinois State Rep. Will Guzzardi and Reclaim Chicago, a group supported by progressive organizations National Nurses United (NNU) and The People’s Lobby. Garcia reinforced the message of the SEIU ad, denouncing Chicago's "tale of two cities" under Mayor Emanuel.

"I’m proud and humbled to be cast as a bearer of the legacy of Harold Washington. Like Mayor Washington, I believe that the people of Chicago and our communities are the heart and soul of our city." said Garcia. "Mayor Emanuel believes that his crony corporations are all that matter. He views the working families of this city with indifference, unworthy of either regard or a fair share of civic resources."

"Under Emanuel, Chicago is really two cities: The gleaming corporate wealth of the Loop, surrounded by dozens of neighborhoods that are starved of resources and plagued by social problems that accompany disinvestment and disinterest."

"I am committed to local revenue and savings options that are progressive, rather than regressive. Options that don’t force our most vulnerable neighbors to bear the brunt of the cost of frontline services. At the same time, I support local and national solutions that include progressive state income tax and financial transaction tax," he said to heavy applause.

A Garcia campaign spokesperson tells In These Times that the candidate was not submitting a proposal for a Chicago-specific FTT—which would likely require a change in Illinois state law; highly unlikely under new Republican Gov. Bruce Rauner—but voicing support for the policy on a national level.

Still, the endorsement of FTT—a tax placed on the trade, sale or purchase of financial instruments such as stocks or bonds, also known as a "Robin Hood tax"—marks the first time Garcia has publicly come out in support of a program that could potentially raise billions in annual revenue to fund pension obligations and public services through targeting speculation by major banks, hedge funds and super-rich investors.

While the tax has been met with stiff opposition by powerful financial groups, FTT has proved to be an effective progressive revenue generator in the over 40 countries that have enacted the tax, including France, Switzerland, Italy and Peru.

Karen Lewis, president of the Chicago Teachers Union (which has endorsed Garcia), voiced strong support for FTT, before she was sidelined from the mayoral race by a brain tumor, and NNU has pushed for it on local and national levels, terming it a “Wall Street Tax.”

Critics of the tax, including Mayor Emanuel, have floated fears that financial businesses could flee if such a tax was enacted, taking jobs with them.

But considering Chicagoans currently pay 9.25% sales tax, while billionaire investors pay zero taxes for stock trades, requiring a fraction of a percent tax on these transactions could serve as a small way to create more justice in our financial system.

Countries where FTT is a reality have not seen economic collapse. On the contrary, they include some of the “freest” economies in the world, as deemed by the conservative Heritage Foundation. And the United States actually already had its own financial transaction tax in place from 1914 to 1966, until it was repealed to "streamline" the tax system.

Mayor Emanuel has spent the past two weeks barraging Garcia with claims that he is not a “serious” candidate and has no real plan to deal with Chicago’s fiscal crisis.

But this new ad hammering the mayor for policies that enrich the wealthy by disinvesting in Chicago neighborhoods—as well as Garcia’s support for a financial transaction tax—could help stymie this line of attack by further casting Emanuel as an out of touch elite, and Garcia as a defender and advocate for working people in Chicago.