Workers of the Snark Factory, Unite: Gawker May Stake Out Ground for Unions in New Media 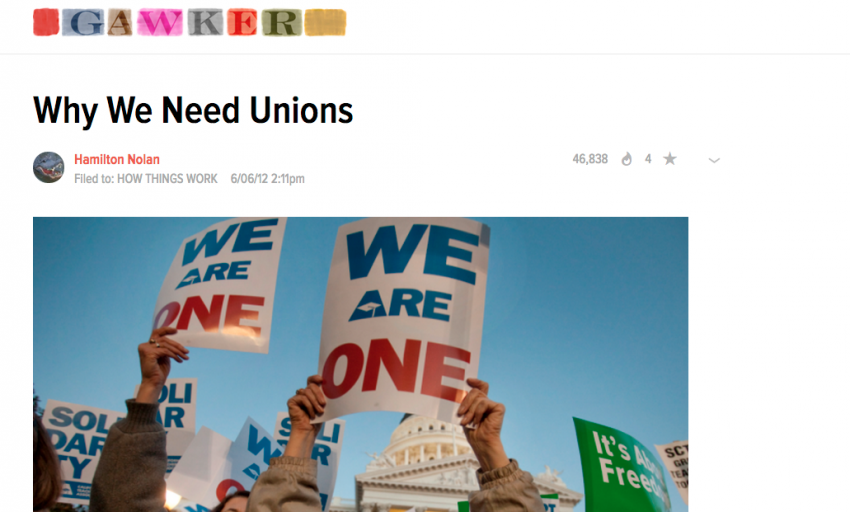 The "we" in Hamilton Nolan's 2012 piece "Why We Need Unions" wasn't referring to Gawker staff themselves, but the site's writers announced this week that they intend to form a union. (Gawker.com)

Gawker, a new media outfit that’s the nation’s only reliable source for news about In These Times editors accidentally burning their genitals, announced last week that they’re looking to form a union.

Unions, which were once fairly common in print media, have yet to catch on in new media. Gawker’s Hamilton Nolan hopes to change that. He’s been writing about labor at Gawker for some time now. (And like many of our labor writers noted before we unionized at In These Times last year, Nolan says he’s had no good answer for sources who have often asked him why he’s not in a union.) While most think of the site’s irreverent and occasionally vicious snark as its principal contribution to political and cultural discourse, Nolan has proven a strong voice on the Left alongside the site’s stream of celebrity gossip and annotated YouTube videos.

And it’s effective. Gawker’s voice is well suited to calling out corporate power and articulating political nuances, all while remaining readable and relatable to a set of readers who have grown comfortable with the site's casual voice.

Nolan has been quick to emphasize that Gawker is a good place to work. He sees staffers’ pay as satisfactory and thinks everyone is treated well. He has also stressed that things aren’t perfect. Common concerns are getting wage scale and creating a structure for a regular system of raises. Establishing a union in good times will protect their staff in bad times—which, Nolan writes, “will inevitably come.”

And in an industry where freelancing and precarity are standard, and professional reporters with the ability to do real investigative work have increasingly found themselves relegated to contract or “consulting” work, the need for more structured and organized workplaces is clear.

But Gawker’s union drive is bigger than any particular workplace dispute. Nolan stressed when we spoke that they are unionizing because they believe in unionism. “Every workplace could use a union,” Nolan wrote in his post announcing the union drive. “A union is the only real mechanism that enables employees to join together to bargain collectively, rather than as a bunch of separate powerless entities.”

While the larger print news companies have a history of unionism—and most are still unionized, though Amazon CEO and Washington Post owner Jeff Bezos would probably prefer that they weren’t—the broader media and publishing industry has a more fraught relationship with unions. n+1’s recent series on labor and the magazine industry describes a sense of superiority as posing a barrier to unionization at places like The New Yorker and Harper’s. In the print magazine industry, prestige has often been seen as precluding a need for organizing, and the print culture’s bosses opposed (and often defeated) union drives.

But online media is still in a developmental stage. Nolan hopes that Gawker can set an example for other online media companies and help secure a space for unionism in new media as the industry continues to define the culture of its workplaces. “If we can do it,” Nolan says in an interview, “we can show that it can be done.”

When asked if he thought management would fight the union drive, he said Gawker was “an enlightened company,” and he didn’t foresee any major disputes.

Nick Denton, Gawker Media CEO, referred to journalists and “content creators” alike as having a “strong anarcho-syndicalist tradition” in an interview with Capital New York. Though he’s a proud capitalist, he claims to be “intensely relaxed” about the union effort. And he’s not surprised, either. “This company is full of socialists,” he told the Washington Post.

Gawker’s union drive is particularly important for two reasons. First, if new media is the future of serious journalism, as it appears to be, the industry owes the public more than work produced by contracted GIF miners. It needs to be able to support professionals who can report on stories of public import. Unions will help provide the structure for those workplaces to cultivate those reporters and allow them to thrive; the precarity of their current situation should be of public concern.

Second, if the announcement that Gawker staff is unionizing is any indication as to how the rest of the union negotiations go, this is going to be a public affair. It will be highly visible, and the people who read Gawker—people who are probably liberal but by and large probably not interested in unionism—will have a chance to see that unions work. According to their advertising page, Gawker has a monthly U.S. readership of 64,000,000.

“The reality is that the people who need unions the most work in … the least empowered workplaces. McDonald’s workers need unions more than any white collar industry,” he says.

The hope is that Gawker’s union drive adds fuel to the fire of movements already well underway, like Fight for 15, and, through its public nature, plays into and expands a growing national narrative about the necessity of unions for workers in all industries.