Los Angeles Is Getting a $15 Minimum Wage 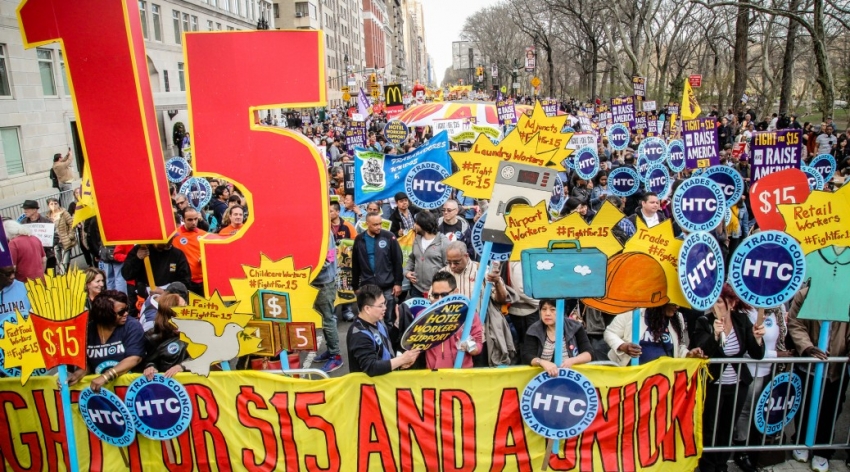 LA is the biggest city yet to commit to such a huge wage hike. (Fight for $15)

According to the motion released by the Los Angeles City Council, minimum wage will be monitored accordingly once the $15 wage is in place. “Beginning, July 1, 2015, the minimum wage will be increased annually at a rate consistent with the Consumer Price Index for Urban Wage Earners and Clerical Workers.”

These victories have been supported by the efforts of labor organizations like Fight for $15, who have petitioned, protested and gone on strike for higher wages, better working conditions and a minimum wage of $15 in over 190 cities around the world. Without such agitation, it’s unlikely  that a target wage as high as $15 would even be considered across the country, much less implemented. The Los Angeles ordinance is the first to come after Fight for $15’s National Day of Action on April 15 when over 60,000 low-wage workers went on strike in order to petition for $15 minimum wage. Today, members of the campaign are marching on the McDonald’s shareholder meeting in suburban Chicago.

The National Day of Action drew attention all over the world, but specifically struck interest in New York when centrist and austerity-minded Governor Andrew Cuomo agreed that fast food workers deserve a raise. He then created a Wage Board on May 7 in order to fully investigate the working wage needed to live and survive in New York. “Through the Wage Board, New York can set fast-food workers on a path out of poverty, ease the burden on taxpayers and create a new national standard.”