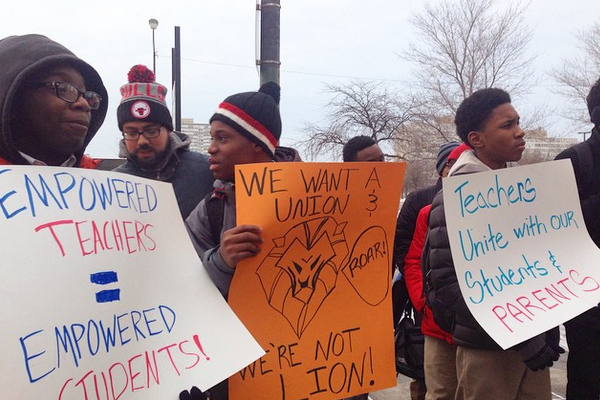 On Wednesday, a majority of Urban Prep teachers voted to join the Chicago Alliance of Charter Teachers and Staff (Chicago ACTS).

Fifty-six teachers voted for, and 36 voted against, joining Chicago ACTS—a joint Chicago Teachers Union, Illinois Federation of Teachers and American Federation of Teachers project. However, the vote’s results are not yet set in stone because the National Labor Relations Board (NLRB) is looking into 21 other votes cast by employees like counselors and department chairs with debatable union eligibility. Currently, 60 percent of teachers voted to unionize—the lowest percentage of any of the 29 schools that have voted to join Chicago ACTS. Union organizers say they are confident they will retain a majority.

At the request of Urban Prep COO Evan Lewis, the vote was conducted via an NLRB-sanctioned secret-ballot election. Lewis said this process is the most “fair and democratic” one, the argument often put forward by management about such elections. Teachers had wanted administers to recognize the union through “card check,” a count of how many employees signed union cards. Secret ballot elections can be viewed as benefitting bosses, who are able to use the time between the announcement of the intention to form a union and the union vote itself to organize against the union.

Principal Ronald Bryant assured parents that “Urban Prep respects and will continue to respect the right of employees to choose to join or not join a union.” He also expressed worry that unionization could impact the school’s mission of prioritizing students’ needs and said, “unions have taken anti-charter school positions including recent opposition to a bill designed to provide equal funding to charter schools and have criticized our schools and students’ achievements.” Urban Prep is a network of all-men's charter schools that often touts its 100 percent four-year college acceptance rate.

Brian Harris, special education teacher and Chicago ACTS president, says Urban Prep administrators have been using meetings to discourage teachers from forming a union. According to Catalyst Chicago, Noel Perez-White, a Bronzeville campus teacher, says some of her colleagues are worried about voting for the union because they do not know if they will be rehired for the next school year. Teachers say their union will fight for higher pay, more training and an end to high-turnover rates—moves that will benefit teachers and ultimately students.

The vote comes three months after Urban Prep and North Lawndale College Prep (NLCP) announced their intention to unionize and amidst a growing movement to organize charter school teachers in Chicago and around the country. Unionized charter schools in Chicago include the United Neighborhood Organization network and several Chicago International Charter Schools.