With Thousands Marching in the Streets, Chicago Teachers Union Declares ‘This Means War!’ 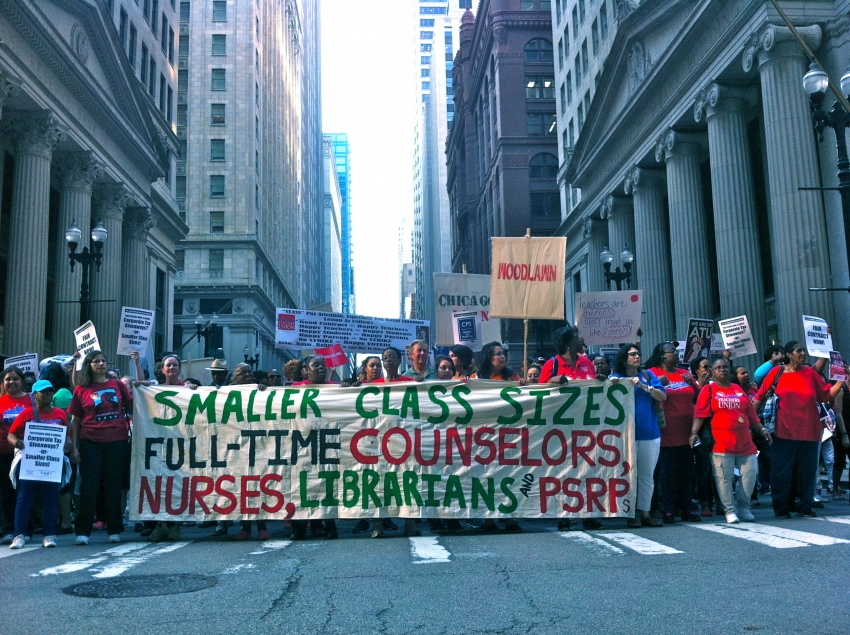 Teachers, Students and Community Members demonstrate in front of the Chicago Board of Trade   (Martin de Bourmont)

Cries of “this means war!” echoed throughout Chicago’s financial district this Tuesday as teachers demonstrated against the Board of Education ahead of union contract negotiations this summer.

They made for a formidable sight: led by a troupe of black-clad high school percussionists and holding their fists up high, members of the Chicago Teachers Union (CTU) and their supporters marched on Chicago’s LaSalle Street yesterday demanding adequate wages, benefits and resources for their students, insisting that the district’s financial woes are actually a case of Chicago Public Schools (CPS) being “broke on purpose.”

The rally, which began in front of Chicago’s James R. Thompson center, served as an unofficial kickoff for the CTU’s campaign to bargain a new contract with CPS’s Board of Education, which represents 400,000 students and the country’s third-largest school district. The current contract expires on June 30.

CPS currently faces a $1.1 billion budget gap for the fiscal year beginning on July 1, leaving doubt as to whether or not it will be able to pay the $634 million due to the Chicago Teachers Pension Fund on June 30. Further hampering negotiations between the CTU and CPS is the district’s contention that Chicago teachers will need to accept a 7% pay cut along with increases in health insurance premiums.

Rather than enacting budget cuts, the CTU is demanding that the city’s wealthiest corporations pay more in taxes in order to fund smaller class sizes, less standardized testing, funding for school libraries and art classes, and increased staffing of all schools with counselors and clinicians. Teachers also demanded the protection of teachers’ pensions and salaries.

Many of the demonstrators carried signs that matched the evening’s rhetoric in militancy and succinct condemnation of the Chicago city government. “Payout? No thanks!” read a popular sign. “Take the money from the banks!” “The 1% owes us,” read another. Others reminded onlookers of the sacrifices inherent in every public school teacher’s life: “ ‘I do this for the money,’ said no teacher ever.”

At the rally, teachers spoke of the increasingly harsh conditions they faced at work and their negative impact on Chicago students.

“We get [to school] at around 5 or 5:30 every single morning,” explained one teacher from Farragut Career Academy.  “On Mondays, I arrive a little bit late, around six and I usually leave around five. When I go home, I work, and I work during the weekends. And now they’re going to take away 7% of my income.”

Holly Charles, a teacher from West Englewood, explained that many schools do not even have enough funding to support a janitorial staff.  “I didn’t get into teaching for the money,” she said, noting that she had worked in the CPS system for 30 years. “I’m bringing toilet paper from home, having to mop my own floor,” she says. “There’s not enough money for janitors. But I bet if you head into any of the CPS headquarters, you’ll find toilet paper and clean floors there.”

Another teacher, from Chicago’s South Shore High School, said that his school’s needs went far beyond a janitorial staff. “We don’t even have libraries in the school,” he said. “We need to reduce our class sizes, [but] they’re increasing class sizes. If they increase class sizes teachers are going to be managing students not teaching students.”

Limiting class sizes was a priority for most of the teachers I spoke to. “You have one teacher for every thirty kids,” explained one teacher from Chicago’s West Side. “We don’t have enough staff. Thirty kids with one teacher is just crazy. Our special needs kids aren’t getting service.”

On May 6, the CTU filed an unfair labor practice complaint against the Chicago Board of Education, alleging that the board engaged in “reactionary and retaliatory measures” by purposely stalling negotiations and requiring teachers to bear the burden of a manufactured crisis. Citing CPS's damaging investments in high-risk bonds and a $20.5 million contract to train school principals, CTU president Karen Lewis argued that “CPS is broke on purpose,” and that the “Board has created a fiscal crisis in order to justify its continued attacks on our classrooms and our communities.”

Adding friction to the already contentious relationship between CPS and the CTU is a recent scandal involving Barbara Byrd-Bennett, the former CEO of CPS. Hired by Mayor Rahm Emanuel in 2012, Byrd-Bennett resigned from her post on June 1, almost two months after federal investigators launched an investigation against her for allegedly awarding a $20.5 million no-bid contract to a former employer.

After congregating at the James R. Thompson Center, teachers, parents, students and community members marched on LaSalle Street, home to the Chicago Board of Trade, the world’s oldest futures and options exchange. The Chicago Board of Trade now belongs to the CME Group, which also includes the Chicago Mercantile exchange and is one of the world’s largest options and futures exchanges. Labeled “the biggest financial exchange you have never heard of” by The Economist in 2013, the CME Group owns derivatives and futures exchanges in Chicago and New York as well as the Dow Jones stock and financial indexes.

The union’s point was clear: the city government should return the money it lost on LaSalle street to the people of Chicago.

“Whose city?” chanted the marchers as they walked towards the Board of Trade. “Our city!” was the evening’s resounding cry.

Upon reaching the Board of Trade, Tara Stamps, a classroom teacher and city council candidate spoke not only to the concerns of parents, students and teachers, but to all Chicagoans of working-class backgrounds. She likened the Chicago Board of Trade to a group of degenerate gamblers playing a high-stakes game in which penalties are reserved for Chicago’s poor and minority populations.

“This is the Chicago Board of Trade!” she exclaimed. “They have the money. They’re the biggest gamblers in the business and they’re gambling with our babies’ future! They’re jailing us out, they’re privatizing us out and they’re trying to get us out by any means necessary.”

“This isn’t just about black folks, or Latino folks,” she told the crowd. “If you are poor, or working class, they’re trying to move you out of Chicago. They don’t want us here. Well I’ll be damned if they try to move me out of my Chicago!”

Michael Brunson, a Chicago educator and the CTU’s recording secretary, took the microphone after Stamps to call for a “LaSalle Street Tax,” echoing a plan elaborated by Karen Lewis in 2014 that called for taxing buyers and sellers of futures, futures options and securities option contracts traded on the Chicago Mercantile Exchange and the Chicago Board of Options trade. Last year, Lewis argued her proposal could create $2 billion in annual revenue for the city of Chicago and more than $10 billion for Illinois, mitigating the effects of Chicago’s pension crisis.

“Every year we hear, ‘we have no money,’ ” Brunson began. But “CPS is broke on purpose! … CPS owes half a billion dollars in toxic loans. We are going to change that. This is where it is! The Chicago Board of Trade. We can get over ten billion dollars if they tax these trades.”

The rally and the subsequent march on the Chicago Board of Trade served as a direct challenge to the policies of Mayor Emanuel, with whom the CTU has repeatedly clashed over the past three years. In 2013, Emanuel administered the closing of 50 Chicago public schools—mostly in poor minority neighborhoods—for “underperformance” and “underutilization.” The previous year, Chicago teachers held the first teachers’ strike in 25 years to contest Rahm’s education policies, which included extensions to the school day and the expansion of charter schools, which receive public funding but are not subject to many of the operate outside the public school system. The striking teachers also demanded better pay, increased job security, funding for arts classes and “wraparound services” that support underprivileged students including social workers, counselors and nurses.

“Show us the money, that’s what we want,” a Taft High School teacher said as the crowd prepared to march on the Chicago Board of Trade. “Open the books and let us see how broke you really are.”

Referring to the city’s elected leadership, he said, “The people of Chicago elected you. Now what you need to do is take care of the people instead of your friends—the banks and the big companies. We are Chicago, not those banks.”