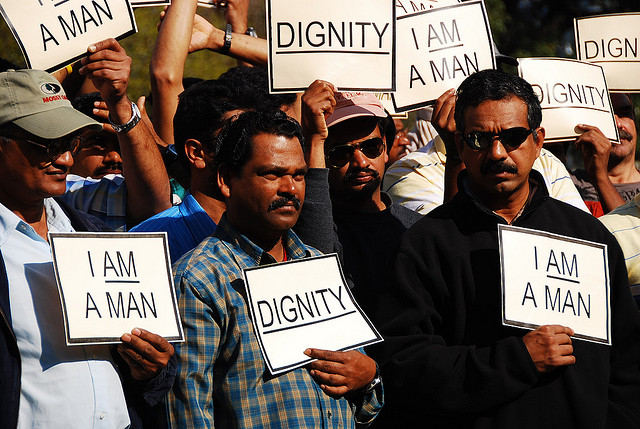 In June, In These Times reported that industry groups have filed a lawsuit against new government-issued worker protections for H-2B guestworkers. That’s not their only strategy, however: new proposed riders on a Senate appropriations bill could block some of the new protections—and some old ones—no matter the outcome of the lawsuit.

Many employers were outraged when the Obama administration passed new rules regulating the H-2B visa program, which brings in foreign workers to do temporary, low-skill, nonagricultural jobs like landscaping and seafood processing when there are purported shortages of U.S. workers. Proposed riders to the Labor and Health and Human Services, Education and Related Agencies Senate appropriations bill seek to hobble the provisions most galling to H-2B employers.

Those industry bugbears include a guarantee that workers get paid for at least three-fourths of the hours in their job orders, requirements that U.S. workers doing the same jobs as H-2B workers receive the same wages and benefits and limits on the use of private wage surveys to determine H-2B wage levels. One of the riders also defunds audits of applications for the temporary labor certification required to obtain H-2B labor, which the Department of Labor uses to identify and punish employers fraudulently attempting to get workers.

Jim Knoepp of the Southern Poverty Law Center pointed to a case of years-long fraud in the H-2B program to illustrate the folly of eliminating audits. Craig Stanford “Stan” Eury, Jr., owner of the North Carolina-based International Labor Management Corporation and a major force in procuring guestworkers for employers, recently pleaded guilty to fraud and obstructing government function for playing dirty with H-2B applications. Federal officials found that his company helped request 150 snowmakers for North Carolina ski slopes. Once the “snowmakers” arrived, most were sent to completely different jobs.

The U.S. government said Eury and his associates fabricated companies in order to create pools of H-2B workers to farm out to employers who hadn’t been approved for workers, got around statutory caps on H-2B workers by petitioning for H-2A workers (the agricultural counterpart of H-2B workers) and sending them to H-2B jobs, collected illegal fees from their client companies and instructed employers on how to avoid hiring U.S. workers. (Since the H-2B program is meant to be used only in labor shortages, employers must hire qualified U.S. workers before seeking guestworkers.) In at least one case, they helped an employer underpay workers by bringing them in for lower-paid jobs than the ones they actually performed.

Eury defrauded employers, guestworkers, U.S. workers and the government. What, Knoepp wondered, could be the justification for preventing audits that uncover egregious violations like this one? To guestworker advocates, it’s further evidence that “low-road employers” want access to an exploitable source of labor.

Knoepp also criticized the challenges to the “three-fourths guarantee,” which says that H-2B workers must be paid for at least three-fourths of the hours in their job orders. Under the new rule, that means an average of at least 26 hours a week. According to Knoepp, that’s already a compromise. “Personally, I think they should get a four-quarter wage guarantee,” he said, pointing out that most workers expect to get the full number of hours in their contract.

JJ Rosenbaum of the National Guestworker Alliance said she wanted to clarify that guestworker advocates support small businesses. “We have a real vision that workers and small business owners can work together for decent standards,” she said, adding that she wanted “to debunk that myth that employers will go out of business” if they follow the new rules. The new rules were designed to keep the H-2B program from eroding wages and working conditions for all workers, including the 24 million Americans Rosenbaum said work alongside guestworkers. Like the other advocates, she struck a tone of incredulity, noting, “I think if I didn’t work in this area, I would take for granted that workers have these protections.”

In its recent comment on the new rules, the U.S. Chamber of Commerce told the Departments of Labor and Homeland Security that the three-fourths guarantee is “another unnecessary burden for employers to shoulder.” It said that employers cannot be expected to “accurately predict months in advance what their exact temporary labor needs will be.”

The American Immigration Lawyers Association, in its comment on the rule, recommended that the definition of “full-time” be changed back to 30 hours per week from the new rule’s 35, in part because of the “significant burden” imposed on employers by the three-fourths guarantee. If “full-time” were defined as 30 hours a week, the three-fourths guarantee would ensure under 23 hours a week for guestworkers.

While riders to the appropriations bill do not actually alter regulations, they can hamstring them by depriving them of funding. In this case, while the rules may remain intact, the riders specify that “none of the funds in this Act shall be used to enforce the definition of corresponding employment . . . or the three-fourths guarantee rule definition.”

The appropriations bills have plenty of negotiations to undergo before becoming law, however, and these riders may be removed in the process. Obama will surely not want to sign into law provisions that block his own administration’s regulations. But there’s enough horse-trading in these bills that no one can predict what compromises will be made. Indeed, similar riders defunded similar rules the Obama administration issued in 2012.