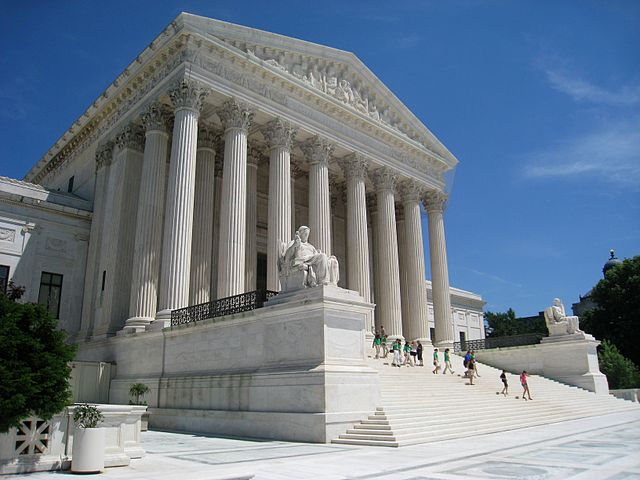 Even if unions lose the Friedrichs case, it need not be the end of the world. It might even prompt some change in strategy that would strengthen unions. (Daderot / Wikimedia Commons)

While most liberals were celebrating the Supreme Court’s June rulings affirming both marriage equality and Obamacare, many labor leaders were already worrying about next year. They feared that the court might hear a case that many of them saw as potentially delivering a crippling blow to the union movement: Friedrichs v. California Teachers Association. And at the last minute, the court announced it would.

If a majority of the Supreme Court justices back the plaintiff in the Friedrichs case, promoted by a variety of right-wing, anti-union organizations, they will likely overturn the 1977 Abood v. Detroit Board of Education court decision. The Supreme Court ruled in Abood that when a public employee union provided benefits, such as collective bargaining or grievance processing, to both members and non-members alike, the non-members could be charged a “fair share” or “agency shop” fee to cover an appropriate share of union expenses. Critics of the Friedrichs petition say that if justices agreed with its complaint, the Supreme Court’s action would have the effect of passing a national right-to-work law for all public employees (even though public employed collective bargaining rights are primarily matters of state law).

“We are disappointed that at a time when big corporations and the wealthy few are rewriting the rules in their favor, knocking American families and our entire economy off-balance, the Supreme Court has chosen to take a case that threatens the fundamental promise of America—that if you work hard and play by the rules you should be able to provide for your family and live a decent life.

Whether celebrating from the Right or mourning from the Left, many observers saw the Supreme Court’s decision to take the case as another nail in the coffin of the labor movement.

There are good reasons to be concerned. A ruling in favor of Friedrichs would legally and morally permit some workers to be “free riders”—individuals who take advantage of what the union by law must provide them without paying for it. Perhaps more important, it would disregard the fundamental reasoning behind the National Labor Relations Act (NLRA)-protected “union security clauses.” The law was intended to encourage collective bargaining, and if some workers could opt out of supporting collective bargaining, legislators reasoned, they would weaken the institution.

From a practical point of view, unions would lose income that they could be using to improve conditions for all workers, including organizing the unorganized (although only voluntary political contributions, not dues money, can be used for union political advocacy). And a ruling in favor of the plaintiff would be a symbolic blow, a legal slap in the face, to a movement which has endured many such blows in the past.

But there are many other reasons to think that, win or lose on this case, the labor movement may not be as seriously damaged as many now fear.

First, there is a chance that even with this very conservative court (whose conservative bloc split enough times to give the liberal bloc some unexpected victories this past term), a majority might vote against the Friedrichs plaintiffs. The Supreme Court has narrowed interpretations of Abood in recent related cases, such as Harris v. Quinn. In that case, the court ruled that home care workers paid by the state are not state employees and thus are exempt from fair share requirements. Conservatives typically argue that agency fee payers are forced to financially support speech with which they disagree, thus violating the First Amendment. They have even argued that collective bargaining constitutes political speech for public employees.

But surprisingly, as the union lawyers noted in their response to the Friedrichs petition, normally arch-conservative Justice Antonin Scalia has offered strong arguments in defense of the agency fee, going beyond the usual “free-rider” critique of people getting benefits without paying their cost.

“What is distinctive, however, about the ‘free riders’ who are nonunion members of the union’s own bargaining unit is that in some respects they are free riders whom the law requires the union to carry—indeed, requires the union to go out of its way to benefit, even at the expense of its other interests,” Scalia wrote in the case of Lehnert v. Ferris Faculty Association. Scalia would have to perform some pretty spectacular legal acrobatic maneuvers to move from that position to rejection of a “fair share” fee.

But even if unions lose the Friedrichs case, it need not be the end of the world. It might even prompt some change in strategy that would strengthen unions.

For starters, non-member workers who pay agency fees make up only about 9 percent of the public sector workers who are covered by union contracts, according to Bureau of Labor Statistics figures. And though the “fair share” payment varies by union, local, region and other factors, it is always at least a substantial reduction from full public worker union membership fees. With union density more than five times as great in the public sector compared to the rate of unionization in private business, and with unions feeling pressed for money already, any loss of public union income hurts, but it may not be a “life or death” situation, as some fear.

Also, it is hard to gauge how much difference Abood has made in the growth of public unions since the decision was handed down in 1977. At that time, 33 percent of the public sector was unionized (nearly 5 million members), and 40 percent were under contract; in 2014, 36 percent were members, and 39 percent under contract, according to Union Stats. Membership peaked at 39 percent of public workers in 1994, the same year that 45 percent were covered by a contract, then dropped to around 35-36 percent membership recently. (The number of public sector members peaked at 8.7 million in 2009.)

So it seems that having the Abood union security protection may have helped the public sector unions keep pace with employment growth and avoid, until recently, setbacks from massive employer attacks. But the effect seems modest. An AFSCME spokesperson emphasized that the union grew to be powerful before fair share; the implication is that they could do it again.

But didn’t Wisconsin Gov. Scott Walker’s Act 10 lead to huge union membership losses as a result of eliminating fair share payments? Yes, there were great losses, as the Washington Post reported: “The state branch of the National Education Association, once 100,000 strong, has seen its membership drop by a third. The American Federation of Teachers, which organized in the college system, saw a 50 percent decline. The 70,000-person membership in the state employees union has fallen by 70 percent.”

But unions lost the right to bargain over almost everything, lost dues check-off, were forced to have representation elections ever year and suffered other assaults that led to members no longer paying dues. The loss of fair share payments played a small role in the overall union losses. Indiana Republican Gov. Mitch Daniels rescinded an earlier executive order from Democratic Gov. Evan Bayh granting union representation rights to state employees almost as soon as Daniels took office in 2005. Now Illinois Gov. Bruce Rauner is trying to wipe out a broad swath of worker rights. If a win on Friedrichs emboldens the right-wing Republicans in the scope of their attack, then it could lead to other measures that could be disastrous.

Fourth, as labor lawyer Thomas Geoghegan writes in his recent book Only One Thing Can Save Us, no unions in Europe have the legal security protection U.S. unions have that permits a requirement that all workers either join or pay a fee to a recognized union in their workplace. Yet they have still fared relatively well. Of course, most European unions benefit even more from the laws that often extend the terms of union negotiated wages in an industry to all workers in the industry, whether they belong to a union or not.  That would make an enormous difference in the U.S., well worth even giving up an agency shop fee in order to obtain it, as Geoghegan makes a case for (which is one reason why it is unlikely to happen).

Finally, unions have discovered that there are other ways to deal with workers who are not on their membership rolls. For example, for the first half of last year, AFSCME set out to organize as full members 50,000 of the fair share payers or other non-members in workplaces where they had contracts. They organized 90,000. Some cases were easy—such as workers who thought they were members but weren’t. Renewing the drive this year, the union has signed up 50,000 more, according to an AFSCME spokesperson. The National Education Association has signed up 13,000 fair share payers as members, and other public sector unions are undertaking similar campaigns.

Internal organizing takes staff time and money, and some unionists fear that if the fair share requirement is dropped, not only agency dues payers but also current members may decide not to pay full dues or become full voting members. It is a risk, and the internal organizing adds new demands on already overstretched unions. But it also may lead unions to turn their membership into the active, educated force in the workplace and in the public arena that it already claims to be but all too often isn’t.

The biggest danger of a Supreme Court victory for anti-union forces in Friedrichs is the potential for encouraging more and more devastating legal and political attack on workers who want to organize. Bad as times are now, they could get worse. But the best defense—as well as the best offense to gain improvements—is a highly motivated, well-organized and politically savvy union workforce.