Teach Classes in the Morning, Drive Uber at Night: Why Chicago Adjuncts Are Demanding a Union 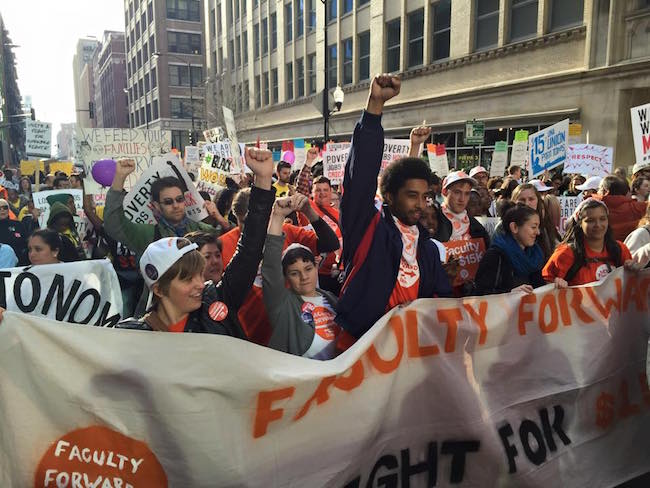 In 2008, when Wanda Evans-Brewer—still in the throes of her graduate work—was offered an adjunct position at Concordia University in Chicago, she took it as an auspicious sign for her future as an academic. She thought she had earned the respect of her professors at Concordia and was on the fast track to a full-time tenured professorship.

But now, at 48, Evans-Brewer is still part of the contingent faculty at Concordia University, where she’s lucky if she’s offered two or three courses per semester. Concordia pays a meager $2,700 per course, which pans out to about $2,300 after taxes—putting Evans-Brewer, and likely many other adjuncts at Concordia, at the poverty line. This fall Evans-Brewer was allotted one class—qualifying her for an Illinois LINK card and Medicaid. She says she has had to supplement her income as a part-time Uber driver.

Like the many other adjuncts at Concordia, Evans-Brewer receives no benefits or guarantee that she will be offered any classes from semester to semester—and she has to wait eight weeks into each class before she receives a paycheck. When Evans-Brewer gathered the nerve to ask the Concordia president about receiving her pay earlier, she says he told her “there was nothing he could do about it.”

Fed up, Evans-Brewer joined the Chicago chapter of Faculty Forward —a unionization movement for non-tenure track faculty backed by the Service Employees International Union (SEIU) that has been gaining momentum in Chicago colleges and universities since early 2015. Over the past decade, adjunct unionization has seen a “domino effect” throughout major cities—including Washington D.C., Boston, Los Angeles and Seattle—where contingent faculty have been able to negotiate for increased pay, year-long contracts and increased benefits. Faculty Forward Chicago, which organizers say is a movement against the “corporatization” of higher education in Chicago, is advancing a number of demands, including a $15,000 minimum compensation per course (though organizers consider this an aspiration more than an immediately winnable demand).

“There is a growing perception that we need to unionize across Chicago. I actually do feel like there’s lots of solidarity across campuses,” says Janet Sedlar, a senior lecturer in the Romance Languages Department at the University of Chicago, where adjuncts are paid $5,096 per class. Though Sedlar says “[she’s] in the best situation among lecturers,” receiving benefits and full-time pay, she stills sees the appeal of a union. “If the university decided to cut a certain benefit, [adjunct faculty have] absolutely no recourse since we’re not unionized,” she said.

There are over 6,500 non-tenured professors working at private colleges and universities across Chicago—many of whom have no job stability and low pay, despite juggling multiple jobs. According to Faculty Forward, in Illinois, 20 percent of contingent faculty at private universities and colleges—people with tertiary degrees—rely on public assistance. Across the country, the paychecks of top administrators have swelled at three times the rate of faculty over the past three decades.

“Ten years ago, I would walk into a tenure-track position with my background and the things I’ve accomplished,” said Matthew Hoffman who teaches sociology part-time at Loyola University Chicago and Illinois Institute of Technology, and serves on the organizing committee for Faculty Forward Chicago. “The job market is so abysmal that there’s very little hope of landing a job that’s actually a career. [Unionizing] is actually our best hope ... to transform higher education from the bottom up, from the people who are exploited.”

Faculty Forward has put the majority of its unionization efforts into Loyola and the University of Chicago, with the hope that these wealthy universities can create a standard for the rest of the city, as Tufts University did in Boston and George Washington University did in D.C. Between 2002 and 2012, Loyola has quadrupled the number of adjuncts it employs and decreased instruction spending by 11 percent. Meanwhile, Loyola’s total revenues have risen by over a quarter of a billion dollars.  In 2011, University of Chicago President Robert Zimmer rolled in $3.4 million, making him the highest paid university administrator in the country. As of June 2014, the University of Chicago endowment was appraised at $7.55 billion. It’s little surprise, then, that Faculty Forward has seen fervent adjunct support at both schools.

Sedlar says University of Chicago adjuncts hope to hold an election for unionization either this quarter or next.

On October 14, the Chicago City Council voted unanimously to support the unionization of adjunct faculty and called for univiersities to allow adjuncts to unionize without administration interference. Yet unionization will depend on faculty, students, and organizers putting pressure on those administrations to negotiate. According to Sedlar and Hoffman, the administrations at the University of Chicago and Loyola have not retaliated against organizing faculty, but they also have not made any attempts to respond thus far.

Though SEIU is currently running one of its largest adjunct organizing campaigns in Chicago, support at smaller Chicago colleges like Concordia, where pay is often the lowest, has been sporadic at best. At Concordia, Evans-Brewer says, she is “all by herself” in the unionization effort and doesn’t see a resolution in the foreseeable future.

“There’s a large amount of adjuncts [at Concordia]. But they’re quiet,” said Evans-Brewer. “I’m one of the few people who raised hell. They’re not raising hell. At the end of the day, they want their classes.”

But with victories at schools like Loyola and University of Chicago and a succession of adjunct victories across the country, Evans-Brewer may not be alone for long.