“I’m as Poor as Shit”: A Look at Downward Mobility in Lancaster, Ohio

Newlyweds Jason Roach and Jessica Cantrell are driving on Interstate 33 towards their home in Lancaster, Ohio when they notice a police car flashing its lights behind them. Their three young children sit in the backseat, and a five-ounce ball of heroin that the couple picked up in Columbus lies in a diaper bag in plain sight. Jason, 37, has two felonies on his record for credit card theft and assault, and Jessica, 25, has served time for dealing heroin. After their arrests, sitting in the back of the police car, Jason begins to cry as he pleads with the police officer, ​“I’m tryin’ to take care of my family, man! I’m fuckin’ strugglin’ in life just like everybody else, man!” The police officer does not offer his condolences to Jason. Later, in a Lancaster court, a judge will reprimand Jason: ​“You are part of a much larger problem, and it’s disgusting.”

Disgust and shame have come to define the attitudes of Lancaster’s citizens towards rising drug addiction and poverty in their once prosperous town on the western foothills of the Appalachian Mountains. But Brian Alexander in his new book Glass House: The 1% Economy and the Shattering of the All-American Town makes the case that Lancaster’s decline is not the result of individual ​“bad” decisions, like not using birth control, dropping out of high school and getting addicted to opioids. Instead, it’s the consequence of deregulatory economics on Wall Street that eviscerated working-class communities in small towns across the United States.

In 1947, Forbes magazine ran a feature article on Lancaster, Ohio — arguing that the town was ​“the epitome and apogee of the American free-enterprise system.” In its heyday, Lancaster, situated ​“atop a sea of natural glass,” was home to the world’s largest glassware manufacturer, the Anchor Hocking Glass Company. For decades, young Midwestern couples flocked to Lancaster for good-paying industrial jobs that required no more than a high school diploma. ​“You couldn’t spend more than a few days, even a few hours, in Lancaster without somebody trying to indoctrinate you as to why Lancaster was an exceptional town, and why living there was the same kind of lucky break as being born in America.” Even long after the hollowing out of much of the country’s manufacturing industry in the 1970s and 1980s, Lancaster continued to thrive, pumping out 600,000 pieces of glassware a day.

Alexander, a California-based human sexuality reporter and author of America Unzipped, seems an unlikely authority on Lancaster, Ohio. (In Glass House, he carries over the obnoxious habit of evaluating the physical attractiveness of each of his female subjects.) But his knowledge of the town stems from his upbringing in the booming Lancaster of the 1960s and 1970s, when candy shops, movie theaters and even a department store lined Main Street. Alexander spent his teenage years scooping ice cream at the local Baskin Robbins and hanging out poolside at the Lancaster Country Club, at the time, a middle-class community center where the children of Anchor Hocking workers and bosses played together.

But the Lancaster that Alexander returns to in the 21st century stands in sharp contrast to its mid-century counterpart. ​“Vape shops, tattoo studios, mattress stores, car title-loan offices, Dollar General, [and] Family Dollar…pepper the town.” Lancaster has earned a reputation in the southern Ohio as ​“heroin heaven.” Sixty percent of pregnant women test positive for cocaine, opiates, meth and Xanax during prenatal checkups, yet one woman’s proposal to build a drug rehab center is met with death threats. Eighty percent of single mothers with children under five live in poverty, and one in two students in the Lancaster City School District qualifies for free or reduced lunch — though many do not accept it out of pride. As Brian Gossett, a 26-year old fourth-generation Anchor Hocking factory worker tells Alexander, and many of Alexander’s subjects who juggle two or three minimum wage jobs reiterate, ​“I’m as poor as shit.”

Mirroring the decline of unions in the United States, Anchor Hocking, for decades Lancaster’s largest employer, has lost 80 percent of its jobs since its peak in the 1960s — today providing less than 1,200 jobs to Lancaster’s 39,000 residents.

Lancaster’s unwinding began in the late 1970s, when the corporate leadership of Anchor Hocking began to prioritize stock values over manufacturing productivity. In 1978, Anchor Hocking went public. The company’s corporate executives, who for the first time weren’t based in Lancaster, began pandering to the interests of shareholders and executives. A series of Wall Street-run corporations and private equity firms increased profits and lowered costs by firing hundreds of Anchor Hocking workers, and slashing away at the wages and retirement funds, healthcare benefits, and vacation days for the remaining employees — all while paying themselves multi-million dollar salaries. Between 2011 and 2012, Anchor Hocking paid $54 million to the private equity firm Monomoy Capital Partners in dividends and advisory fees, sending Anchor Hocking to bankruptcy court. CEO John Sheppard alone received $2,281,966 in 2012.

Anchor Hocking’s corporate management frequently cornered union bosses into agreeing to lower wages and reduced pay by threatening to shutter operations entirely and find cheaper labor elsewhere — an all-too-familiar ultimatum among the former union strongholds of the Rust Belt. In 2008, the company began busing in undocumented Mexican workers to Lancaster, and putting them up in highway motels in a ploy to circumvent union wages. In 1985, the average union employee made $9.33 per hour, or $16 per hour in 2016 dollars with health benefits and robust retirement funds. By 2015, new hires earned $12 per hour. Many of those who bought health insurance took home less than $10,000 a year after union dues, so most just went without it.

As Sam Soloman, one of the more candid of Anchor Hocking’s succession of CEOs, described the company’s business model, ​“It’s not about making the product, it’s about making the money appear and the 99 percent doesn’t understand that.”

At times, Glass House reads as if it were two books, one about the decline of a small Rust Belt town and the other about corporate greed on Wall Street. This is a flaw to the extent that it makes for a jarring read. In the former sections, Alexander attempts to mimic the local dialect and mindset, often resorting to cheap sentimentality, while reducing his characters to stereotypes. Meanwhile, the story behind the Wall Street-led ravaging of Anchor Hocking is written in the highly technical language of corporate finance.

Yet, this disconnect between Lancaster and Wall Street helps illuminate the absurdity and injustice of having a few bankers earn millions while thousands of workers lose their jobs and fall into poverty. Most of the Lancasterians who Alexander interviews do not recognize the names of the CEOs and firms that have impoverished their town when he mentions them.

In fact, when Alexander’s subjects contemplate why Lancaster has become so poor, rarely do people point fingers at corporate leadership. Instead they look closer to home. A municipal judge tells Alexander, ​“We’ve seen the wrong part of our society grow dramatically in population, while the other side is having to pay for that.” When an unemployed worker turns down a $30 offer from a local doctor to mow his lawn, the doctor uses it as proof that the ​“underclass just want to lie around collecting welfare.”

President Donald Trump’s latest budget proposal for the coming fiscal year suggests a similar attitude towards the nation’s poor. The Trump administration is pushing for $800 billion in cuts to Medicaid, $192 billion in rollbacks to the Supplemental Nutritional Assistance Program, or food stamps, and $272 billion in reductions to all welfare programs over the next decade. If passed, each of these cuts would undoubtedly increase suffering in Lancaster, where the population is 94 percent white. Yet, in November 2016, 61 percent of the county’s residents voted for Trump, putting Fairfield County among Ohio’s 82 counties that went to Trump (out of a total of 88) in this traditional swing-state that was once flush with working-class Democrats.

In Glass House, Alexander struggles to find a satisfactory explanation for Lancaster’s support for government austerity, self-reliance and Right-wing politics under expanding conditions of poverty. Perhaps this is because he barely touches on the Democratic Party’s strong ties to Wall Street and its corresponding failure to protect unions and unite the working-class across racial lines. Instead, Alexander resorts to vague platitudes about nationwide decline: ​“If you didn’t adopt [this line of thinking], you might be forced to consider the idea that something had gone rotten in the heart of the all-American town — and, just maybe, in America itself.”

Reading between the lines, however, it is clear the origins of that rot lie elsewhere. 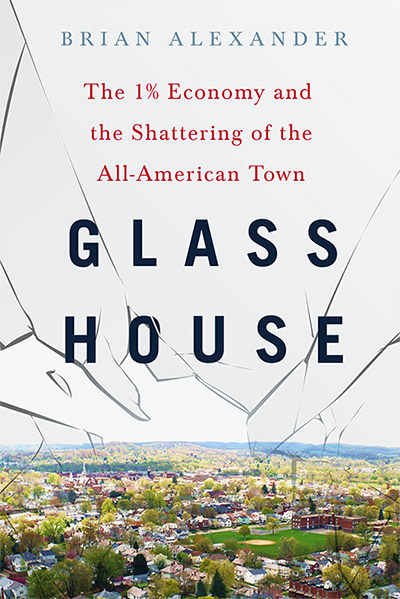 See the options
Lauren Kaori Gurley is a staff writer at VICE’s Motherboard on the labor beat. She is a former contributing writer to Rural America In These Times and In These Times intern. You can follow her on Twitter @laurenkgurley.
Have thoughts or reactions to this or any other piece that you'd like to share? Send us a note with the Letter to the Editor form.
More articles by Lauren Kaori Gurley
InvestigationGoodman Institute
Treated Like Meat: Women in Meatpacking Say #MeToo
At the world’s largest pork processing company, Smithfield Foods, workers say as long as lines are moving fast, supervisors who sexually harass them get a free pass.
Feature
What We Don’t Talk About When We Talk About Rural Poverty
Unemployment, depopulation and the legacy of slavery in Jefferson County, Miss.
Rural America
West Virginia, “Identity Decline” and Why Democrats Must Not Look Away From the Rural Poor
Similar articles
Rural America
The Curious Case of Carter County: How a Small Town in Montana Stopped Shrinking
On the Great Plains, these days, rural towns tend to wither. But in remote eastern Montana, one community is bucking that trend. How?
Eric Dietrich
Rural America
Study: “Salmon Remain on the Brink of Extinction. And Time Is Running Out.”
Between dams and warming waters, West Coast populations of wild salmon have plunged by 98%. What will it take to stop the decline?
Tara Lohan
Rural America
The EPA Responded to a Respiratory Virus by Relaxing Pollution Controls
Major polluters were deemed 'essential.' Under EPA policy, environmental and safety inspectors were not.
Victor B. Flatt and Joel A. Mintz
Join our newsletter
Fearless journalism, emailed straight to you.
Subscribe and Save 66%