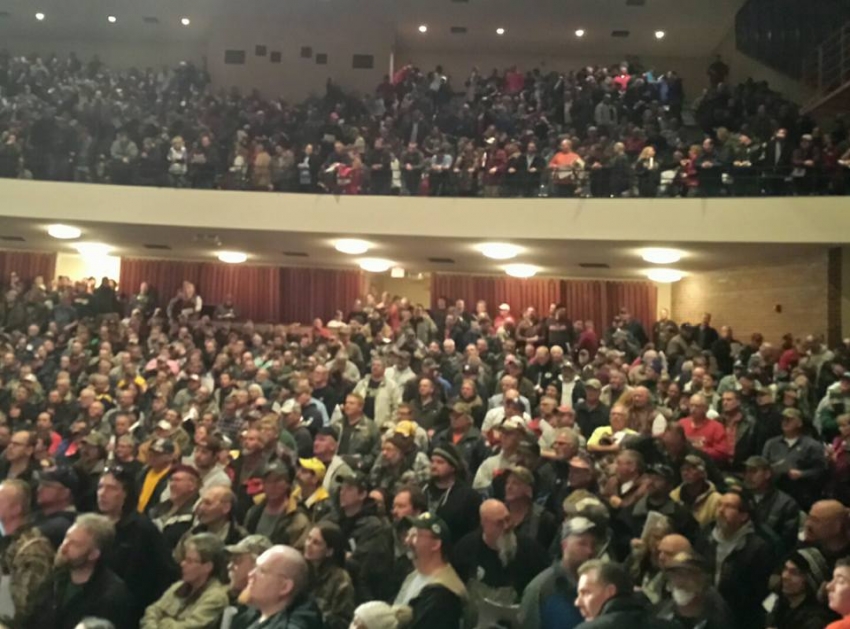 Some 1,847 members of UAW Local 833 packed the Plymouth High School auditorium for the December 15 ratification meeting. A whopping 91 percent voted for the new contract with Kohler. (UAW Local 833)

This exclamation of outrage gained national traction when, in the iconic 1976 movie, "Network," a "mad prophet" of the airwaves induced angry Americans to go to their windows and shout it out to the world. Forty years later it perfectly captured the mood of over 2,000 production workers in northeast Wisconsin who struck the mighty Kohler Company—a privately held, international manufacturer of luxury bath and other products—and won.

Members of United Auto Workers Local 833 weren't about to settle for shouting out their windows or being part of that enraged working class venting frustration through tough-talking pundits or politicians who ultimately fail them. They took their fate in their own hands, with stunning results.

"Communication was number one," said Local 833 president Tim Tayloe. Eighteen months before the November 15 strike, he was preparing members for what many saw as inevitable. "A lot of people were pissed off. I told them to save their money and be ready for a three-month strike, just in case."

The source of agitation was what they describe as a repugnant 2010 contract negotiated under duress from mass layoffs, threats of offshoring and a shaky economy. After a five-year wage freeze, benefit concessions and a two-tier wage scheme that left new hires forever behind, conditions were ripe for rebellion.

On-site visits, meetings at the hall, phone calls, plant stewards and a close ear to the ground kept Local officers in touch with members working shifts 'round the clock at Kohler's sprawling plant in the tiny town bearing its name. They tracked Kohler's inventory and found just about a month's worth left as contract talks neared, Tayloe said.

On November 15, a 94 percent strike vote all but shuttered the plant for lack of skilled workers. Supervisors, office staff, and "replacement workers" couldn't sustain production, leaving customers in limbo.

By strike's end, Kohler had "lost orders that had been there for 30-something years." Tayloe took no joy in that. It was a grim assessment, like casualties of war. So, too, was the decision to strike. Once made, though, Local 833 was all in.

The hall, open and staffed 24 hours a day, was the heart of the operation, pumping out flyers and mass text messages, logging in volunteers, juggling phone calls and accepting donations of firewood, food and cash.

"It was overwhelming," said Penny Sawall, Local 833 recording secretary. "People would just come in and say, 'Where can I help?' Some couldn't physically handle the picket lines so they worked here, giving people rides, running coffee out to the lines, doing whatever they could.”

It was "hectic," Sawall said, but the Local held fast behind the primary goal of mitigating disparities between some 1,600 long-term workers (Tier A) and 400 new hires (Tier B). Kohler had treated the latter badly—low pay, reduced or nonexistent benefits, no job security—and "thought they could buy off Tier A" with pay raises to keep it that way. "But it just didn't happen."

Instead, "people got together to hear each other's experience," steward and education committee chair Eric Koene explained. Tier A saw Tier B workers "on food stamps and not able to make ends meet. We saw them as the next generation, our kids and grandkids, and we didn't want them to be screwed. We banded together and stood up to corporate greed. Maybe someday they'll stand up for us."

The strike, then, pivoted on a majority taking a moral and principled stand on behalf of a minority they outnumbered four to one—even as the company threatened to lay them all off and move the plant elsewhere.

It was a stunning development that inspired and excited a labor movement sorely in need of exactly that. Local 833 got cash donations from unions all over the country that beefed up their treasury to sustain them for the long haul.

Labor and even some mainstream media saw it as the right story at the right time: a David-and-Goliath showdown between workaday folks barely getting by and a large, profitable, and seemingly heartless corporation. It resonated, especially in the surrounding and hugely working-class community.

"The response was unbelievable." Local 833 vice president Jim Brock is still blown away by the reaction. "We had the support of the people to keep this going. They needed somebody to start taking some of these bastards on, not just bow down and take it. And for the right reasons—for equality."

The Local's food pantry swelled, cash contributions flowed and signs of solidarity were everywhere, from honking cars passing by to spontaneous drop-offs of snacks and supplies for picketers.

Financial secretary Dave Boucher was especially heartened by Local 833's evolution from a "service union" business model to the kind of old-fashioned, solidarity unionism that served labor so well for so long. A membership that had been "no longer involved" and mostly "complacent" came together and "took a step forward for the common good. We realized that if we turned our back on the younger workers, it would come back to haunt us someday."

After more than a month on strike and about 10 days before Christmas, Kohler relented. The union secured an imperfect but dramatically improved contract, raising some Tier B jobs to full wage parity and others to 85 percent of Tier A. They thawed the wage freeze with pay hikes over the life of the deal and got better health insurance and pensions, a $2,000 signing bonus, and even holiday pay for Thanksgiving and the day after while they were on strike. Members ratified the deal with 91 percent in favor.

"It's never really good to be on strike," said steward Roger Hoitink, but he was happy with the result. After 43 years, he'll be retiring soon, knowing that he helped younger coworkers get some big pay raises, even though he's just getting 50 cents an hour for now. "We were holding out for them, and by the end of the strike, we all drew a lot closer."

Tier B member Cindy Kuhn, who had come from a business background to work at the Kohler plant, said she was "brought to tears" by the kindness and solidarity she witnessed during the strike. "What an eye-opening experience," she reflected. "It really showed me what a true union can do."