How Can We Make Restaurant Jobs Into Good Jobs? 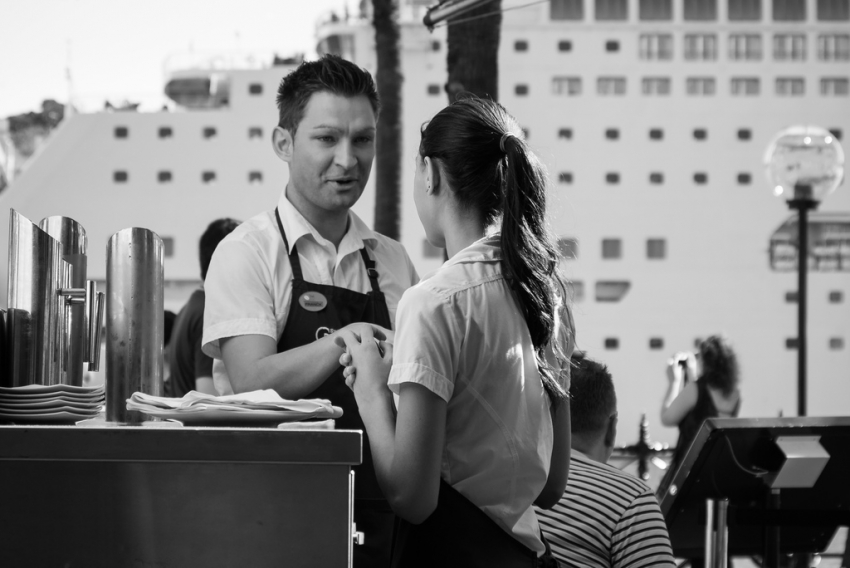 Over 14 million Americans work in the restaurant industry, making it the nation’s second-largest private sector employer. But it is the worst place to work by many measures: 90 percent of restaurant workers in the U.S. don’t have access to health care or paid sick days, and according to the Bureau of Labor Statistics seven of the 10 worst-paying jobs are in food services. The 3.7 million employees in the fast food sector constitute the lowest-paid workers in the entire U.S. economy. These workers earn an average hourly wage of approximately $9 an hour, or somewhere south of $19,000 per year for those lucky few with full-time jobs.

Not that full service restaurants are any better. In 18 states, wait staff, bussers and hosts receive the “tipped minimum wage” of $2.13 an hour. The idea is that customers’ tips will bump these workers’ hourly pay up to the federal minimum of $7.25 and beyond. Still, the tipping system makes the restaurant industry an outlier in the U.S.—indeed in the world’s—economy. As Saru Jayaraman, co-founder of the Restaurant Opportunities Center (ROC) said in a 2014 interview with Bill Moyers: “This is the only industry on earth that has gotten away with saying we practically shouldn’t pay our workers at all—customers should do that.”

Long accustomed to using the term “slave wages” in the rhetorical sense, Jayaraman told In These Times that the term can be taken literally as well. “I had no idea until I started doing historical research that in fact these are slave wages—they originated in slavery,” she said. The custom of tipping began in feudal Europe and eventually made its way to America in the late 19th century. Railroads were experiencing a massive expansion following the end of the Civil War, and employers like the Pullman Train Company recruited workers from among the large class of newly freed slaves. These workers relied entirely on tips from travelers until they won a base wage after becoming organized through the Brotherhood of Sleeping Car Porters. Restaurant workers, Jayaraman explains, were not so lucky and have remained dependent on the tipped wage—even as countries throughout Europe gradually abandoned the tradition of tipping.

The tipping system falls especially hard on women, who account for more than 70 percent of restaurant servers and more than 60 percent of all tipped occupations nationwide. Bereft of a stable base wage, tipped female workers are dependent on their customers’ largesse and are thus put in a position where they have to tolerate sexual harassment in order to support their families. Not surprisingly, the restaurant industry has the highest rate of sexual harassment claims in the U.S. economy; ROC’s own research indicates that around 90 percent of women tipped restaurant workers experience sexual harassment on the job.

In response to ROC’s advocacy efforts, the NRA has maintained that the majority of restaurants “operate on razor thin profit margins” and that “drastic increases to the minimum wage” would hurt small businesses. There are two problems with this line of reasoning. The first is the facts. As Jayaraman points out, the average profit margin for U.S. restaurants of any size—around four to five percent—seems small until you realize that it compares quite favorably to the wildly successful retail giant, Walmart, which has a 2.6 percent profit margin. Second, this counter-argument seems to endorse the morally suspect idea that their industry’s survival depends on not paying their own workers’ wages. (Which, Jayaraman says, sounds an awful lot like antebellum arguments used by the cotton industry to defend slavery).

While they share the same acronym as the gun rights organization, the restaurant industry’s lobbying group is less well-known in this country. But it is no less powerful. According to the Center for Media and Democracy, the NRA takes credit for blocking higher wage laws in more than a dozen states. The lobbying group also pushed back against ROC with a coordinated public relations campaign—funding a defamatory website, ROCExposed.com, and hiring two full-time staffers who bird-dogged Jayaraman at her speaking engagements around the country.

In Jayaraman’s telling, the 2014 publication of the Glass Floor, a ROC report on sexual harassment in the restaurant industry, shamed the industry and forced a rethink in the NRA’s strategy. The most visible change included installing new, female leadership at the lobbying group and phasing out ROCExposed.com. Jayaraman believes these changes came about because the NRA knew the old tactics would have “played into this horribly misogynistic picture of the industry that ROC was painting.”

To demonstrate how the restaurant industry is at a “fork in the road,” Jayaraman’s new book, Forked: A New Standard for American Dining, examines the labor practices of “high road” and “low road” employers. To be considered “high road,” restaurants must meet criteria such as offering paid sick leave and a wage of at least $10/hour for non-tipped employees. Major national chains such as Chipotle, In-N-Out Burger, and Peet’s Coffee and Tea make the list, and are a point of pride for Jayaraman. “I’m increasingly seeing that the high road for the first time ever is visible, viable, high-profile and trendy—which has always been our goal from the very beginning,” she said. Through the ROC-affiliated RAISE, an association of 200 restaurant industry leaders who are on the “high road” to profitability, top restaurant chains like Blue Bottle Coffee and food world luminaries like restaurateur Danny Meyer are promoting sustainable business practices that are good both for customers and workers. For Jayaraman, RAISE represents “the greatest rift in the restaurant industry that we’ve ever seen in 15 years of organizing.”

While ROC’s advocacy efforts on the minimum wage, tipping and worker organizing have benefited countless workers by helping to pass state- and local-level legislation, some skeptics wonder whether ROC should be doing more to organize restaurant workers into labor unions. (Just 1.8 percent of all restaurant workers are currently represented by a union). Veteran labor organizer Steve Early, in a piece for CounterPunch, found it “strange” that ROC does not include formal collective bargaining among its “recipes for change” in the restaurant industry. Strange, Early adds, because “unionization is a far more effective mechanism for taming management misbehavior, on a day-to-day basis, than any hard-to-enforce restaurateur pledge to engage in ‘sustainable business practices.’”

Where does ROC stand on the union question? “We fight for better wages and working conditions for workers,” Jayaraman says, “respect on the job and dignity, power and voice. We do that maybe differently from the way people use the word union but we are essentially fighting for a lot of the things that I think unions originally stood for.”

More to Early’s point, Jayaraman emphasizes that ROC organizing has indeed won court-enforceable agreements with employers, winning back $8 million in lost tips and wages for workers. The bottom line, she emphasizes, is that given the size of this industry, the best way to regulate restaurants won’t be through unionization but through policy changes to ensure better wages and working conditions.

Back in 1954, when the industry was much smaller and before the rise of chain restaurants, more than a quarter of all employees in eating and drinking establishments were unionized. With restaurants now the second-largest industry in the U.S.—one in two Americans have worked at an eating establishment in their lifetimes—the organizing environment has radically changed.

Still one could make the case that restaurant workers are low-hanging fruit for the labor movement. Through the SEIU’s involvement in the Fight for 15 protests—workers’ consciousness has been raised and leaders cultivated; a 2015 poll by the National Employment Law Project shows that 72 percent of workers making less than $15 approve of labor unions.

If unions are not necessarily the answer, then how to get to a place where there are more workers organized for voice, dignity and respect on the job? “It’s going to take a combination of things,” she says, starting with doing something about the tipped wage. “We have to be able to counter-balance the voice and power of the NRA, and their biggest source of power is the fact that they don’t have to pay their own workers.”

Through its One Fair Wage campaign, ROC will be working with its chapters across the country to pass legislation to require restaurants to pay all its employees at least the regular minimum wage. This campaign got an early boost last fall, when the New York Times editorial board called for the elimination of the tipped minimum wage.

“For so many years, even the labor movement and advocates told us we were being too ambitious in fighting to get up to just 60 or 70 percent of the federal minimum wage for tipped workers,” Jayaraman recalls. “And now we’re in a world where we’re saying we’ll accept nothing less than a 100 percent of the federal minimum and get rid of a separate subminimum wage for tipped workers altogether.” There’s a lesson here, she says, for organizers and labor groups: be bold, be ambitious. “It’s not about what we can achieve or what’s politically feasible. It’s starting from what we actually want and need and building a movement around that.”