Why Black Lives Matter Is Taking On Police Unions 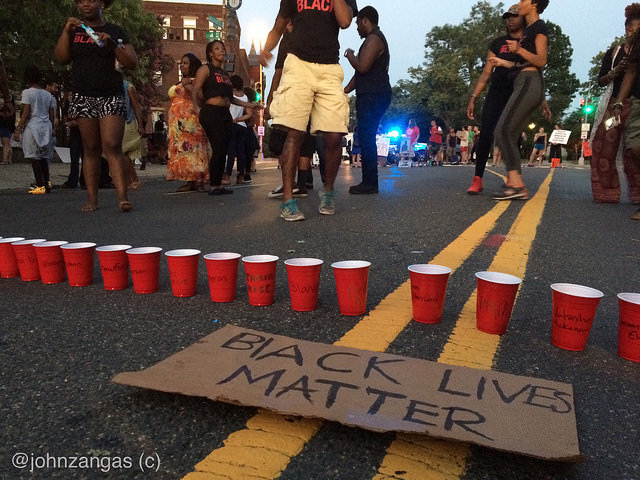 The focus is no longer just on individual officers; it’s on the institutions that protect and shield them. (Vision Planet Media/ Flickr)

Activists in the movement for black lives are working to lift the veil on one of the most powerful influences in law enforcement: police unions.

The focus is no longer just on individual officers; it’s on the institutions that protect and shield them. Organizers protested at the offices of two of the nation’s largest police unions this week as part of a nationwide week of action under the banner #Freedomnow.

“But our message is that the Fraternal Order of Police (FOP) is not just like any union,” she said. “They are a fraternity—and they are the most dangerous fraternity in America.”

As evidence, activists point to the outsized role that police unions often play in national politics, as well as a special set of protections, granted to officers through union contracts and state “police officer bill of rights” laws, that may help insulate them from accountability. The fact that police are empowered to use deadly force on the job makes them different from teachers or firefighers—and their unions' success in securing far-reaching contract provisions that effectively block public oversight puts them in a different category from other beleagued public-sector unions.

An In These Times investigation recently found that certain provisions in collective-bargaining agreements have repeatedly created roadblocks to federally-mandated reforms. Even where local police departments have been found to be in violation of civil-rights laws, contract rules effectively thwarted Department of Justice-led efforts to improve the handling of police misconduct, create or extend civilian oversight, and establish early-warning systems for problem cops. Guaranteeing fairness and due process for members is one thing, say critics, effectively blocking policing reform is another.

On Wednesday, McCants, 25, and other demonstrators with BYP100 and Black Lives Matter in Washington, D.C., shut down traffic outside the FOP’s legislative office.

Activists charge that, as a lobbying heavyweight on Capitol Hill, the FOP is a constant foil of civilian oversight of police, one of the main drivers of so-called Blue Lives Matter bills proliferating around the country and a major foe of federal laws that would crack down on racial profiling.

“The legislative office is basically like the ALEC for cops,” says McCants, referring to the American Legislative Exchange Council, a conservative lobbying group that helps draft and pass state legislation nationwide.

Meanwhile, in New York, 10 activists chained themselves and staged a sit-in at the headquarters of the Patrolmen’s Benevolent Association (PBA) before cops cut the chains and hauled them away in handcuffs.

Other organizers participated in the demonstration by picketing outside, including members of Black Lives Matter, a Million Hoodies and BYP100.

According to BYP100 member Jewel Cadet, a 28-year-old Brooklyn native, the action had two goals: to demand the firing of a cop recently involved in the shooting of an unarmed black motorist and to draw broader attention to the ways that unions cover up police crimes. In addition to contract protections that critics say create a web of obstacles to executing timely, effective and thorough investigations, police unions sometimes disseminate information that is false or misleading.

“We know a lot of people are not as aware of the PBA and don't understand or have access to understanding how the PBA works to protect and defend cops,” says Cadet.

Authorities’ preliminary account says Small approached the officer's car and punched Isaacs through an open window, but, as The New York Times reported, video footage of the incident "showed Mr. Small recoiling from gunfire shortly after he approached Officer Isaacs's car, leaving a limited window in which Mr. Small could have attacked him." Isaacs was put on desk duty pending an investigation.

Samantha Master, a 28-year-old organizer with the Washington, D.C., chapter of BYP100, contends that PBA’s influence is far broader. People usually think of unions as entities that fight for better wages and workplace protections, she says, and that is true for most unions. However, “when police cause harm to civilians under any sort of circumstances the unions play a particular role in covering up the misdeeds of police,” Master says.

“I think that as we learn more about the ways black people are denied justice,” she notes, “the more we peel back that onion, the more layers we see about the corrupt system that supports and enforces this culture.”

Adeshina Emmanuel is an editor at Injustice Watch, a nonprofit journalistic research organization dedicated to exposing institutional failures that obstruct justice and equality. He is a former reporter for DNAinfo Chicago, the Chicago Sun-Times, the Chicago Reporter and Chalkbeat.