A Radical Plan For An Economy That Makes Black Lives Matter 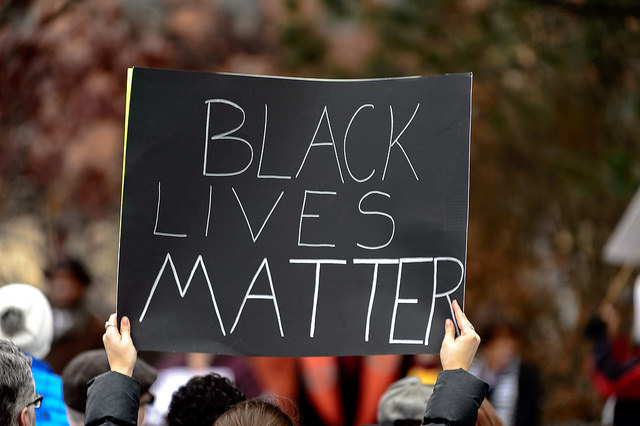 By seeking to take on all of the threats to Black lives and not just those that are most immediate and violent, the Movement For Black Lives (M4BL) is creating a banner behind which the Black working class can march and fight. (niXerKG/ Flickr)

The movement for Black freedom and liberation in the United States took a huge leap forward this week.

That is because the Movement For Black Lives (M4BL) released a policy document that details the changes that must be made in six different areas: incarceration and police violence, reparations, redistribution of state resources, economic justice, community control over police and the democratic deficit in Black communities. It outlines the issues faced by the Black working class, proposes solutions and even details model policies that can be pursued.

It is the most comprehensive outlining of policy from any group associated with the burgeoning Black Lives Matter (BLM) movement since the death of Michael Brown in Ferguson, Missouri, in August 2014. While other organizations—and even the main Black Lives Matter organization itself—have made more general demands on those in power, M4BL seeks to drill down on specifics with this wide-ranging proposal.

M4BL is a coalition of more than 50 organizations, including Black Youth Project 100 (BYP100), the Black Lives Matter Network and Mothers Against Police Brutality. Other groups, such as Jobs With Justice, Showing Up For Racial Justice and Good Jobs Now, are endorsing organizations.

So, what makes M4BL’s comprehensive and transformative policy platform so important? In the words of Steven Pitts, associate chair of the Labor Center at the University of California at Berkeley and one of the collaborators on the economic justice portion of the document, “I think that most people understand that the issue of police murders takes place in a broader context. But those contextual issues can be harder to popularize. This document is so important because it can help to broaden the scope of the conversation and place the context of Black death and police murder within the context of institutional racism and neoliberalism.”

When asked why it is harder for those contextual issues—structural racism, neoliberalism, capitalism—to reach the popular consciousness in the way that police violence does, Pitts replied, “To the extent that we are expressing things today—through videos and tweets—it is difficult to capture the processes of racialized capitalism through those means.”

The policy document is, indeed, not something that can be read quickly. However, it is absolutely necessary that this movement set out the constructs of a society where it has achieved final victory. This effort from M4BL seeks to do just that.

An economy for all people

The platform fills several gaps identified in the first waves of BLM. If this country's police killing 238 Black people is a moral outrage, then what is an estimated 15,000 Black people dying unnecessary deaths to diabetes? By seeking to take on all of the threats to Black lives and not just those that are most immediate and violent, this platform is creating—for the first time since Bayard Rustin and A. Philip Randolph released the Freedom Budget in 1967—a banner behind which the Black working class can march and fight. It does this by seeking to address the challenges working class Black people face in their day-to-day lives under racialized capitalism.

Given the size and comprehensive nature of the document, it’d be impossible to discuss all of the topics it covers in a way that would do them justice in just one article. Of special interest and note to the Working In These Times’ audience should be the economic justice section of the platform, specifically the subsection about the right to organize. Going through the power and faults of the National Labor Relations Act in detail, the platform pulls no punches in discussing how companies that violate labor law are allowed to get away with those violations because they can accept the small fines as a cost of doing business, how the open shop is a threat to working people and how app-based companies like Uber and Lyft game the system through employee misclassification. By seeking to strengthen labor law and the right to organize, the platform seeks to make lasting material gains for Black communities.

The document also scathingly indicts so-called free trade agreements like NAFTA and the Trans-Pacific Partnership, stating, “Global trade policy, strongly supported by the U.S., is structured almost exclusively around the needs of capital, rather than people. So trade barriers are lowered through changes in tariffs to ensure easier flow of capital and goods and regulations that protect local economies, workers or the environment are often weakened to address the needs of an international competitor in a market.”

“While low-wage workers face barriers and costs to mobility, the increasing ease of mobility of capital leads to a race to the bottom where capital follows the lowest wage levels and worst working conditions,” reads the policy, calling for the renegotiation of all of these agreements in a way that protects the right to organize, stops the race to the bottom and preserves the environment.

The need for clean and safe housing and an end to environmental racism is also discussed at length. Stating that, “(B)lack people have been most vulnerable to predatory corporate practices that lead to siting of landfills, incinerators, and a variety of industries that pollute the land, air and water, leading to high rates of cancers, chronic diseases and breathing conditions,” the policy calls for a comprehensive cleanup of polluted communities and an end to such dumping in the future. While the platform falls short of calling for an absolute right to housing, it does call for the “(r)eauthorization of funds to build affordable housing for all,” and an end to “discriminatory credit policies by financial institutions in order to enable access to housing and farmable land.”

The discussion of housing is deeply connected to farming and land access. This is significant as the document discusses the topic in the context of Pigford vs. Glickman, a major lawsuit settled by the U.S. Department of Agriculture around racial bias against Black farmers. The plight of Black farmers is one that has gotten varying amounts of positive attention in U.S. history, usually varying from little to none at all. By calling to “use public resources—funds and land— to implement fair development, prioritizing community-based cooperative entities governed by traditionally excluded communities and community members,” along with the cancellation of debt and an end to foreclosures, the document recalls the history of Black struggle in the South, echoing the aims of the Southern Tenant Farmers Union in a way that has not happened in decades.

Perhaps the most radical and visionary portion of the economic justice platform is the call for building a cooperative economy. The idea of cooperativism is one that first arose in 1844 with the creation of the Rochdale Society of Equitable Engineers in the United Kingdom. In addition to helping textile workers obtain goods at a discount over the market-based firms in the area, the cooperative provided workers and their communities with a taste of economic democracy. That is because the workers and members of the cooperative had a say in the affairs of the business. The concept is still alive and well in Europe, with the most prominent example being the Mondragon Corporation and its 74,000 employees across Spain’s Basque Country. The influence of Mondragon on the Basque Country’s economy has been clear: while the national unemployment rate reached nearly 27 percent and the ruling conservative People’s Party instituted harsh austerity measures in order to secure bailout funding from the International Monetary Fund, the unemployment rate in the Basque Country rose to only 15.5 percent in 2014.

In the United States, the last large-scale effort to engage in cooperativism came at the end of the 19th century. Then, the Farmers’ Alliance (and its smaller counterpart, the Colored Farmers’ National Alliance and Cooperative Union) attempted to end the lifelong penury to the crop-lien system that many in the rural South found themselves beholden to. They did this by creating cooperative stores and the Farmers’ Exchange, which allowed farmers to bypass the local equipment furnishing agent and acquire goods cheaply, as well as sell their cotton for higher prices than they would normally be able to by themselves. This effort, however, was short-lived. The Alliance’s move into national politics doomed it as an organization, and it would be out of existence by the end of the first decade of the 20th century.

As an idea, though, cooperativism will not die. Books like Richard Wolff’s, Democracy at Work: A Cure for Capitalism, and stories such as the occupation and takeover of the Republic Windows and Doors factory by its workers have kept the fire burning. In this decade, we have seen the idea of cooperativism take on newfound life in Black communities. It is, perhaps, unsurprising that Cooperation Jackson is one of the organizations that worked to craft this document, given its role in helping Mississippi’s capital city build a solidarity economy. During the short mayoral term of Chokwe Lumumba, efforts to establish cooperativism in Jackson were ramped up, and the city was to host a regional conference on the subject, Jackson Rising. While the untimely death of Lumumba in 2014 was a bump in the road, Cooperation Jackson and its Chokwe Lumumba Center for Economic Democracy continue the fight. And Jackson is not alone. The government of Rochester, New York, has invested $100,000 into developing a cooperative economy in the city similar to Cleveland’s successful Evergreen Cooperatives.

From a movement-building perspective, one of the ancillary benefits of the M4BL policy document is the potential that it creates for the kind of Rainbow Coalition that was in its embryonic stages when Fred Hampton was murdered by the Chicago Police Department in 1969. After all, some of the issues that M4BL and BLM seek to address also affect other communities of color and—predominantly for the economic issues—the white working class as well. The twisted logic of neoliberalism and its deleterious effects on the poor have touched the American working class of all stripes. As such, it is necessary to build a popular front to fight against a system that eats, lives and spits out surplus value for the wealthy to take.

As the preamble of the document reads, “We recognize that not all of our collective needs and visions can be translated into policy, but we understand that policy change is one of many tactics necessary to move us towards the world we envision.”

The platform might not solve every problem facing Black people, but it does give the space and (more importantly) the resources necessary to make change. If the key to agitation is education, then the Movement For Black Lives has knocked this out of the park.

It is a clear and radical vision for a society where Black lives truly matter.