Contract for Disaster: How Privatization Is Killing the Public Sector 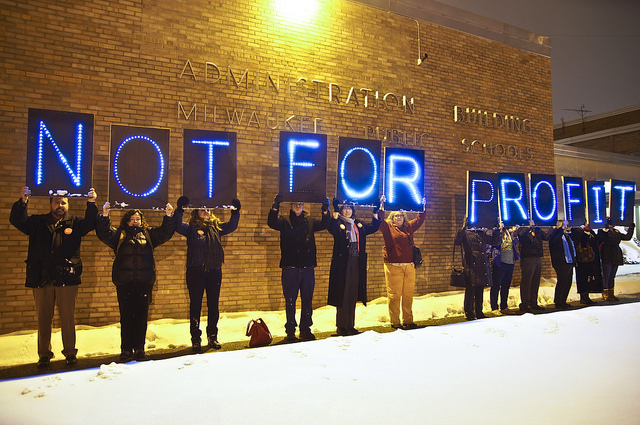 For decades, work in the public sector has been a gateway to a middle-class life. But that’s changing. (Joe Brusky/ Flickr)

Privatization is bad news for federal, state and local government workers, and the communities where they live. That’s according to a new report released Wednesday by In the Public Interest, a research group focused on the effects of privatization.

The study, “How Privatization Increases Inequality,” explores the role privatization plays in the American economy—compiling data on the estimated $1.5 trillion of state and local contracts doled out each year.

“A lot of decisions are small,” says Donald Cohen, executive director of In the Public Interest, but “if you add all that up, it’s very significant."

Many government workers in the United States enjoy a robust structure of pay and benefits, including pensions, health care and paid time off. Workers operate in a structured environment that acts, as the report says, as a ladder of opportunity. A clearly outlined framework of positions and pay grades, backed by enforcement of antidiscrimination laws, makes government jobs particularly friendly to women and people of color—20 percent of public sector jobs are held by Black workers, while nearly 60 percent of public sector jobs are held by women.

For decades, work in the public sector has been a gateway to a middle-class life. But that’s changing.

Cohen notes that the Right managed to make privatization an ideological project. This shift has generated huge profits for corporations and harmed public sector workers and their unions.

“They want to contract out not because it makes sense, but because that’s their jobs. They’re right-wingers,” he says.

Privatized workers have lower rates of unionization, are paid less than their publicly-employed counterparts, don’t have access to benefits and experience high turnover, the report shows. Sometimes they work side-by-side with government employees, as at the University of California system, something that Cohen says is deliberate.

That strategy leaves workers shortchanged—literally. In 2013, the National Employment Law Project found that one in five federal contractors it interviewed was using Medicaid for health care, while 14 percent needed Supplemental Nutrition Assistance (SNAP). Reliance on federal benefits shifts costs from employers to taxpayers.

Contract employees are caught in a poverty trap that hurts not just them, but their communities. Workers who aren’t making money aren’t spending it, dragging down local businesses and creating a ripple effect in regional economies.

The report argues that poor recordkeeping and limited transparency make it extremely difficult to gauge the effects of contracting, and that the public needs to have access to such information. Legislators, advocates, unions and workers should be invested in how, when, where and why contract labor is used.

Is it improving services while keeping standards high for workers? Or is it being used as an ostensible cost-cutting measure, harming workers and shifting expenses to taxpayers and their communities?

We’re seeing a new era of work in America, and the move to contractors over directly-employed government workers is highlighting that shift as well as its consequences. For government workers, privatization is an economic shell game, and they are losing.