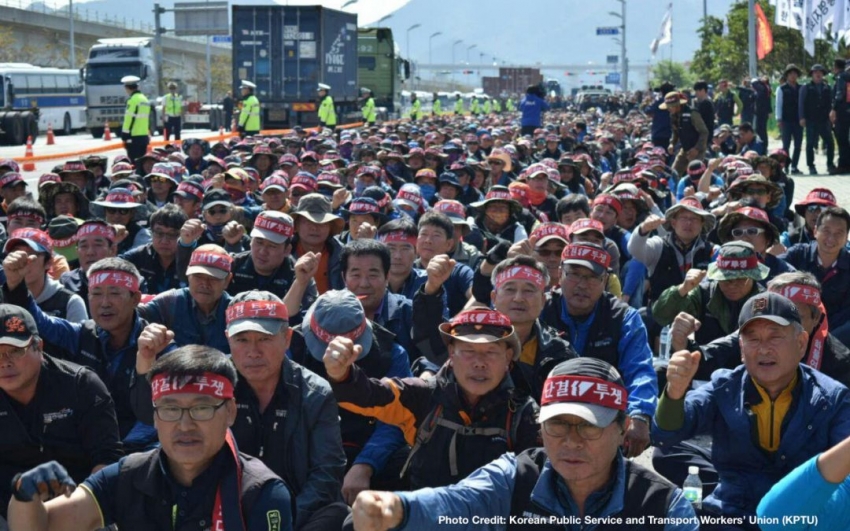 The strikes pose one of the biggest crises in South Korean labor since the 1980s, when workers seized on the country's democratization to create one of Asia's most dynamic labor movements. (Photo Credit: Korean Public Service and Transport Workers' Union)

Over the past few weeks, thousands of South Korean transport workers have gone on strike to protest against government “reform” proposals that would make it easier for employers to fire workers, weaken seniority protections won through collective bargaining and privatize some state-owned industries.

The strikes, and the South Korean government’s fierce crackdown on labor, have generated an unprecedented response from global unions over what they see as clear-cut violations of workers’ rights to freedom of association.

“This has become a challenge to the whole international community and is enormously damaging to the Korean government’s international reputation,” Stephen Cotton, general secretary of the International Transport Workers' Federation (ITF), told In These Times.

The U.S.-Korea Free Trade Agreement, which includes a clause designed to protect labor rights, “is another hook” U.S. unions might use to assist their Korean allies, Feingold said. The protections in that pact, including freedom of association, can be enforced through trade sanctions and fines, but are rarely used.

The strikes pose one of the biggest crises in South Korean labor since the 1980s, when workers seized on the country's democratization to create one of Asia's most dynamic labor movements. In the aftermath of the democratic revolution in 1987, the Korean Confederation of Trade Unions (KCTU) was born out of independent organizing efforts that had been stifled for years in heavy industry, automobiles, transportation and shipbuilding. It is now the second largest union federation in the country.

The latest actions began on October 10, when more than 7,000 owner-operators in trucking joined a national strike against the government’s plan for deregulation of the trucking transport market. The conservative government of President Park Geun-hye responded by declaring the strike illegal, and her transportation minister called the walkout “an act of betrayal” of the nation.

On day one of the strike, more than 4,000 riot police surrounded truckers massed in front of freight depots, including the “New Port” complex in the southern industrial city of Busan, the truckers’ union said. Fifty-five activists were arrested and five injured, the union added. The Yonhap news agency reported that the South Korean military mobilized soldiers to replace striking truck drivers, effectively transforming them into scabs.

The strikers belong to the “Cargo Truckers Solidarity Division” of the Korean Public Service and Transport Workers’ Union (KPTU) known as TruckSol. Wol-san Liem, the KPTU’s director of international and Korean Peninsula affairs, said that the government responded like it did because of the truckers’ “potential power” as well as their “precarious status as independent contractors.” The truckers’ union is part of the larger KCTU.

“They face unreasonable schedules, long hours, multiple levels of subcontracting, and low rates that put them in a really difficult place,” Liem said. “The pressures force them to speed, overload and drive at night for long hours—disastrous to health and family life and also dangerous to other road users.”

She added that problems are compounded because drivers who own their trucks are treated as independent contractors and denied the rights to form and join unions, collectively bargain and strike.

“This means they don’t have legal trade union rights,” Liem said. While it’s not illegal for owner-operators to “collectively refuse to work,” she added, “the government and conservative media try to paint the strike as illegal and our members as a violent mob.”

The truckers’ strike is the latest event in an autumn of industrial actions launched by Korean unions. In late September, other KPTU transport affiliates began a general strike against the government's imposition of performance-related pay and a termination system. Those actions will supposedly align the Korean economy with international practices but in fact provide tools for employers to easily get rid of excess and militant workers.

One of KPTU’s affiliates, the Korean Railway Workers’ Union, has been particularly active in that strike because the government's privatization plans include turning over the country's national rail system to conglomerates called chaebol that already dominate the economy. Rail and subway workers also oppose the imposition of the new merit-based salary system that would make it easier for employers to fire workers who don’t meet certain quotas.

During the rail strike, the KPTU’s Liem said, 165 union officers were suspended from their jobs. Worse, employers filed a lawsuit seeking damages of 165 billion won (about $145 million) from the union and charged 19 union officers with “obstruction,” she said.

Strikes have also taken place in the financial and automobile industries. This month, the union representing workers at Hyundai Motor Company, one of the world’s largest car producers, resumed talks with management “after months of strikes in the automaker’s worst-ever industrial dispute,” the Reuters news agency reported (The talks concluded last week, when 63 percent of Hyundai’s workers voted to accept a new contract).

There was no let-up in transportation strikes, however. Despite the government’s attempt to play down their impact, the Korean Ministry of Land, Infrastructure and Transport said on October 10 that more than 40 percent of the roughly 18,000 unionized workers on railroads and subways were taking part in the strike.

“Since the start of the walkout by railway workers, the operation of cargo trains has been reduced to nearly half of the usual level, forcing local firms to depend on cargo trucks to haul their export and import shipments to and from the country's major seaports,” reported Yonhap, which is owned by the government.

Meanwhile, the ITF and Public Services International (PSI), the global federation of public sector workers, have asked the International Labor Organization (ILO) to intervene to ensure that the Park government respects the rights of workers in South Korea to freedom of association.

The strikes in South Korea, the ITF’s Cotton said in an email, “have been triggered by the government ignoring its own laws by imposing drastic new labour practices in the public sector. It is no secret that this is a precursor to the introduction of widespread privatization.” Yet, despite labor’s objections, “every attempt by the unions to seek talks with the government has been rejected.”

Global unions and human rights groups have been particularly angered by the imprisonment of labor leaders in South Korea, including Han Sang-gyun, the president of the KCTU. He was sentenced in July to five years in jail after he was convicted on charges of organizing a massive rally in Seoul last November that was declared illegal by the government.

During that demonstration, an activist, Baek Nam-gi, was knocked to the ground by police water cannons and suffered serious brain injury. His death on September 25—and a stand-off with the government over its attempt to seize Baek’s body for an autopsy—has sparked demonstrations and vigils all over the country, and has become a national symbol of the struggle against authoritarian rule and repression.

The ITF and PSI raised the arrests of Han and other union leaders in a joint letter to the ILO in September. “The alarming use of arbitrary detention and judicial harassment against (Korean) trade unionists for organizing and participating in public rallies is a major concern,” the unions wrote in a letter signed by Cotton and PSI General Secretary Rosa Pavanelli. “The ITF and the international union movement will never accept the imprisonment of trade union leaders for legitimate trade union activities,” Cotton added in his email.

The AFL-CIO spoke out in June when it issued a statement in support of the KCTU’s Han. And, in a gesture of solidarity this week, the federation has invited KCTU officials to New York to speak at the United Nations on a recent special rapporteur’s report on freedom of association, the AFL-CIO’s Feingold said. That report, issued in January, criticized “a gradual regression on the rights to freedom of peaceful assembly.”

On October 12, as the truckers’ strike heated up in Korea, unions from around the world joined in a global day of solidarity with TruckSol and the Korean strikers. In San Francisco, a protest at the South Korean Consulate was led by United Public Workers for Action, a coalition that seeks to unite workers in the public sector. The campaign can be followed on Twitter at hashtag #KoreanStrikeforJustice.

The global labor movement, the ITF’s Cotton said, will “continue to give every support to workers in South Korea until the government starts to respect international law and enters meaningful negotiations with the unions.”

Tim Shorrock is a Washington-based journalist who grew up in Japan and South Korea. He is the author of Spies for Hire: The Secret World of Intelligence Outsourcing.