In a Nightmare for Neoliberal Ed Reformers, Chicago Charter School Teachers May Strike This Week 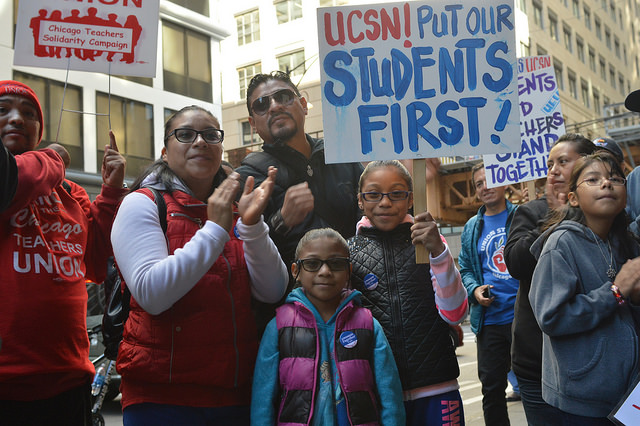 When the Chicago Teachers Union (CTU) struck in 2012, then-CEO of the United Neighborhood Organization (UNO) Juan Rangel took the opportunity to sing the praises of the city’s charter schools, which remained open as CTU members walked the picket lines.

"I think parents are going to be frustrated when they see 50,000 kids (charter students) having an education, going to school without interruption and their kids” are not, Rangel told the Chicago Tribune.

Four years later, the tables have turned. An eleventh-hour agreement between the CTU and the school district headed off a second strike in Chicago Public Schools (CPS) last week. But there’s another teacher walkout still brewing—this time, at the UNO Charter School Network (UCSN), a group of 15 publicly-funded, privately-managed schools established by Rangel’s organization, from which he resigned in 2013. For the past seven months, UCSN teachers have been in a tough contract fight with management. If no agreement is reached this week, teachers plan to strike starting this Wednesday.

A walkout by charter teachers would not be totally unprecedented. Former American Federation of Teachers (AFT) organizer Shaun Richman notes in Jacobin that teachers at a Philadelphia charter school engaged in a “sick-out” during contract negotiations in 2011. But disruptive labor actions are a rare sight in the traditionally union-free charter industry, and UCSN teachers’ overwhelming vote this month to authorize a network-wide strike breaks new ground.

As education reformers have aggressively pushed the nationwide expansion of charter schools in recent years, teachers unions have fought back on two fronts. In addition to opposing continued charter growth, they have poured resources into unionizing existing charters in order to thwart what many believed was the central rationale of charter schools: chipping away at unions and driving down wages and working conditions in the industry.

“The city thought they were going to use charters to break the unions,” says Erica Stewart, a 5th-grade teacher at UNO’s Sandra Cisneros elementary school. “It didn’t work.” Stewart, who has taught within UCSN for six years after being laid off by CPS, helped bring a union into the network in 2013 and now serves on the bargaining committee.

Chicago has been a hotbed for charter organizing. The Chicago Alliance of Charter Teachers and Staff (Chicago ACTS), an affiliate of the AFT that launched in 2009, now represents 32 charter schools, about one-fifth of the city’s total. Chicago ACTS’s numbers and leverage got a major boost when UCSN’s campuses voted to unionize in 2013. Though Chicago ACTS isn’t part of the CTU—under state law, charter and public school teachers can’t be part of the same unit or collectively bargain together—the two groups have a “service agreement” through which the latter provides bargaining and grievance representation for unionized charter teachers.

This fall, charter and non-charter teachers have also rallied support for each other’s contract fights. In preparation for a possible strike, dozens of UCSN teachers, parents and supporters from the CTU and other unions picketed in front of the charter network’s swanky downtown headquarters last week. The building’s $250,000-a-year rent is a sore point for the union, United Educators at UNO (UEU), which says it suggested relocating to a less expensive space and reducing administrative staff as alternatives to classroom cuts this year. In August, UCSN laid off dozens of teachers and support staff, citing budget constraints

“I want to point out these beautiful offices,” said Stewart. “The money being spent on offices and administrators needs to trickle down to education for our kids.” UCSN schools serve about 8,000 students, who are predominantly low-income and Latino. The union represents 532 teachers and support staff.

Among those laid off were Jorge Cisneros, who taught technology classes at the network’s Esmeralda Santiago campus. He picketed along with his daughter, Marisa, who is in 6th grade at the Daniel Zizumbo campus in Archer Heights. Cisneros has since found another position teaching 1st-grade at a different UCSN school, but he worries that the elimination of technology teachers network-wide will impact students’ education. Indeed, says Marisa, many students in her school have struggled to learn basic typing this year, even though they will soon have to take standardized tests that are administered on the computer.

While the schools pride themselves on making technology available to every student, Cisneros notes, “If there are no technology teachers, what good is it?”

The layoffs also removed graduate support advisors, who help guide prospective UCSN students through the complicated selective enrollment process and aid graduates in applying for college. The union is demanding that the layoffs be reversed, and is resisting attempts by UCSN to remove a cap on class sizes and to shift additional pension and healthcare costs onto teachers—issues that also surfaced during the CTU’s contract battle.

In a statement released following last week’s protest at its headquarters, UNSC management said the network’s finances necessitated these cutbacks. “Unlike CPS, UCSN does not have access to TIF (tax increment financing) funds for additional revenue, so any agreement we reach has to be cognizant of our financial constraints.”

Among them is the financial fallout from a messy divorce with the scandal-plagued UNO, the Latino community group that was founded more than a decade before it began establishing charters in 1998. Until last year, UNO directly managed the schools and the bulk of the $80 million allocated annually to UNSC by CPS. But the two entities cut ties following a series of revelations about UNO’s misuse of public funding, including a $98 million state grant to build schools that the organization channeled, in part, to companies led by political allies. After years of dizzying success in promoting the charter-school model, this saga resulted in Rangel’s forced departure as CEO, as well as eventual fraud charges that he paid $10,000 to settle with the Securities and Exchange Commission this year.

Also this year, Chicago Sun-Times reporter Dan Mihalopoulos revealed that UNO officials, including Rangel, had spent public money on lavish meals and travel. In a September letter to teachers and staff, the UCSN board said that it would operate as a “lean organization” going forward, but that as part of the split with UNO, the schools had incurred more than $1 million in legal fees and transition costs, in addition to $7.8 million paid to UNO for the final year of its management contract. System-wide budget cuts this year also resulted in a $5.7 million reduction in CPS funding, according to the board.

Meanwhile, the union suspects that the network is “broke on purpose.”  UEU says it is still waiting for the full picture to emerge, and that UCSN has not yet produced relevant financial information. In the meantime, bargaining will continue down to the wire on Tuesday night.

“The ball is in management’s court,” says Stewart, the 5th-grade teacher. “Either they’re going to get serious about supporting the employees they claim to value and the students whose educations are in their hands, or they’re going to force us to strike to protect the quality of education in our classrooms.”

Our special 40th anniversary issue is out now. Subscribe today and get a free copy.