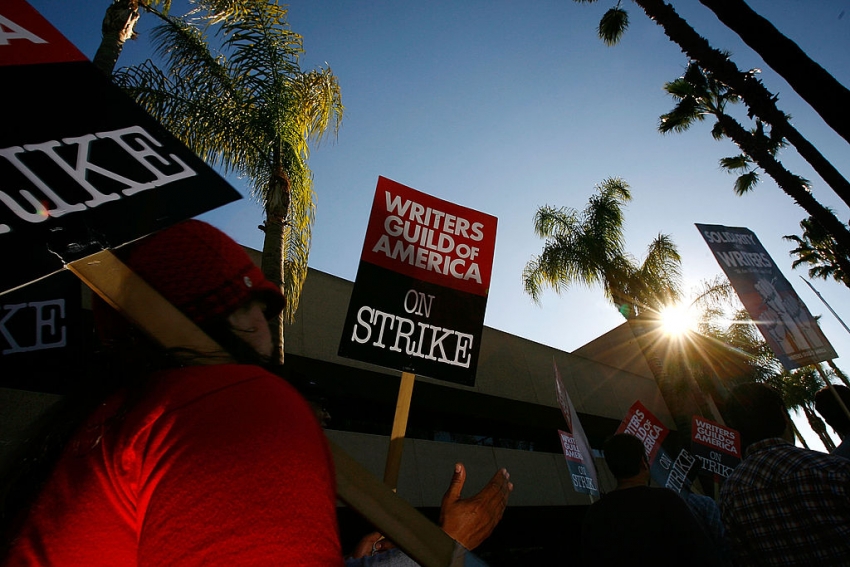 People say we’re living in the golden age of television. Fans enjoy more high-quality choices than at any time in history. But this could all grind to a halt if the Writers Guild of America (WGA) follows through with authorizing a strike, which would start May 2 barring any last-minute deals with the major studios.

In the short-term, late-night talk and sketch shows could go dark or resort to improvisation, and the fall broadcast schedule could be threatened. (The WGA covers screenwriters as well, but movies operate on such a long timeframe that a strike wouldn’t affect releases for over a year.) But more broadly, the battle would determine who benefits from the billions of dollars sloshing around Hollywood: well-off studio executives or the creators who bring unforgettable characters to life.

As Mad Men creator Matthew Weiner told colleagues in recommending a strike, writers simply want “to participate in this windfall we created in the last five years.”

Squeezed on all sides

Writers last walked out in 2007-2008, when YouTube was three years old and the concept of delivering original scripted programming over the Internet was scarcely in anyone’s head. The WGA had the foresight to secure revenues from streaming residuals in that contract. But nobody was prepared for how the industry would change.

Increasingly, scripted shows have shorter and shorter seasons. Sixty-eight percent of all programs aired 13 episodes or fewer last season, according to WGA calculations, rather than the traditional 22. Because writers are compensated on a per-episode basis, that change amounts to a halving of their pay.

In addition, studios are giving shows more time to make those limited numbers of episodes, which is great for the craft but bad for writers’ bottom line. Other behind-the-scenes talent gets paid based on their presence at work; only writers lose money when they get three weeks per episode instead of two.

You might think shorter runs allow writers to hook onto more shows over their careers. But under current terms, writers sign exclusive contracts, with an option to return to their show if it gets renewed. They can’t stack up three shows in a year to make up for lost wages. And exclusive holds can last a full year, if networks delay in confirming a definitive air date. If the delays last long enough, writers can become ineligible for union healthcare and other benefits.

In the past, writers filled these gaps with residual payments. But networks, fearful of tough competition, air far fewer re-runs now. Instead, they sell entire seasons to video-on-demand (VOD) services. Writers make less money from these formats than from network residuals. For example, a network repeat for a 1-hour show yields a writer more than $24,000, while an ad-supported VOD airing nets just $1,228 for the writer, according to union contract rates.

For movie writers, the issues are different. The big studios are making fewer movies, down to 139 releases in 2016 from 204 in 2006, limiting writers’ opportunities. Studios have also begun to reduce script “development,” even demanding free rewrites instead of offering paid time to hone and perfect a screenplay. The vanishing of DVD revenues has also taken a bite. Earnings for screenwriters today are roughly equivalent to earnings from 2000, the WGA estimates.

Finally, the WGA has a large gap in its healthcare fund: It expects a $56 million deficit over the next three years. While negotiations seem like they will yield higher base wages for writers, healthcare has become a critical sticking point. The studios have agreed to fill much of the gap, but with “wage diversions” that would effectively come out of writers’ paychecks. The WGA wants a much higher contribution from management to fund a rainy-day reserve. The two sides are roughly $45 million apart.

TV and film remains very profitable, at least for executives and shareholders. The “Big Six” studios (Fox, Warner Bros., Paramount, Sony, Universal, and Disney) reported operating profits of $51 billion last year, twice as much as in 2007. Upfront TV ad rates increased last year to well over $9 billion, as live programming becomes highly valued in an era of ad-blockers and DVRs. Upstarts like Netflix or Amazon have even more riches at their disposal to pay for programming.

But the studios want to hang onto their bounty, and they have resources to take the sting out of a writer’s strike. A decade ago, the full catalogs of practically every television show ever made weren’t as readily available on demand. Plus, not incorporating reality show storytellers into the 2008 contract could come back to burn the WGA now, as this would become the non-union scab programming replacing sidelined scripted shows on many networks. Add to that a Hollywood strike’s impact on thousands of other ancillary jobs—from stagehands to catering to limo services to hair and makeup—and the WGA could have some challenges this time around.

This would be the sixth WGA strike since 1960, and previous efforts have secured important advances for the backbone of the entertainment industry. Moreover, they have become teachable moments for a country unused to labor strife—a way to directly explain the concepts of fair wages and workers demanding to share in a company’s success.

But now, writers are fighting concentrated power brokers who have devised all sorts of ways to maintain a stranglehold on the billions of people worldwide who fork over money to watch their favorite characters.

Glen Mazzara, former showrunner for The Walking Dead, perhaps put it best on the WGA website: “We’re just trying to get a little bigger piece of a very, very big pie.”