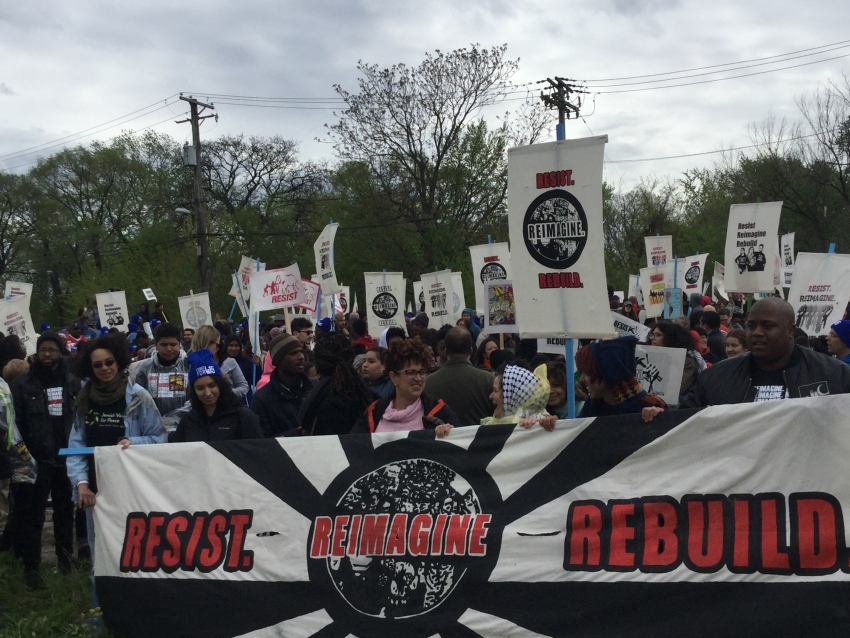 The resistance to Donald Trump took to the streets, parks and other public spaces May Day with a display of unity, diversity and urgency that reflected the depth of the threats to social justice posed by the president’s administration.

In Chicago, for example, hundreds of people took part in the Resist Reimagine Rebuild Chicago (R3) coalition rally Monday morning. R3 consists of a wide range of organizations, including the local chapters of Black Lives Matter, Fight for 15, the Arab American Action Network and Jewish Voices for Peace.

“Our first meeting was pulled together right after the election of Donald Trump,” says Adom Getachew, a member of the Black Youth Project 100, also a part of the R3 coalition. “There was a deep sense of crisis in our communities, and a sense that we’ve been fighting on parallel tracks for a long time, and that the way we’re going to make a difference was by really thinking intersectionally.”

About 10 organizations showed up at that first meeting. There are now more than 30. On the anniversary of the death of Martin Luther King Jr., the group had a public teach-in and “this is our follow-up to take that message into the streets,” according to Getachew.

“The vision of creating an intersectional [campaign] was there from the beginning, and it was partly in response to the national conversation in which it was class over everything else, especially in discussions about the white working class,” Getachew said. “We felt that the submerging of race, of gender, of sexuality, would just lead us back to places we’ve already been. And so we believed our vision of a united front would have to put forward the most marginalized voices.”

R3 is part of The Majority, another coalition that is pursuing similar goals at the national level by creating new connections between different fronts in the resistance movement. Coalition partners include a wide range of social-justice organizations, like 350.org, Fight for 15, the Black Lives Matter Network, Familia: Trans Queer Liberation Movement, the National Domestic Workers Alliance and more. It has sponsored a series of educational events, marches and rallies. On May Day, coalition partners took part in about 60 rallies in every region of the country, according to a spokeswoman for The Majority.

In Chicago, the R3 rally demonstrated its unity with the broader progressive movement by marching to join the city’s primary May Day rally. In Los Angeles, there was a similar show of unity among different elements of the resistance, with several rallies beginning in sites across the city and converging on City Hall. Some 100 organizations signed on to take part—twice the usual number.

Other resistance groups, in dozens of smaller cities, were also galvanized by the Trump administration. They protested in their own ways. Occupy Tucson organized a march, for example, and in Cheyenne, Wyoming, there was a “march to keep families together,” with exhibits “showcasing the struggles immigrants endure, their sacrifices, and their successes through artwork and literature.”

In Cleveland, a range of organizations, from the Inter-religious Task Force to the Burning River Anarchist Collective to the American Federation of Musicians Local 4, formed the Cleveland May Day Coalition and organized a march to “highlight the need to define what community safety means to us.” The coalition issued a statement that calls for an end to the terrorizing of immigrant communities, a defense of workers’ right to organize and earn a living wage, a defense of the rights of women, people with disabilities and LGBTQ people, and action on climate change.

It’s an unusually broad list for a May Day rally, perhaps. But then again, disunity and limited ambition are no longer options.

“We all have to come together to make sure that we’re stronger,” Adriana Alvarez, a McDonald’s worker and member of Fight for 15, said at the R3 rally in Chicago. “It’s all connected. There’s no economic justice without environmental justice or without racial justice. Now that Trump is in office, we figured it out that we’re all struggling the same way. And if we come together, we’re stronger.”