Reviving Manufacturing Would Help All of Us—Not Just White Men 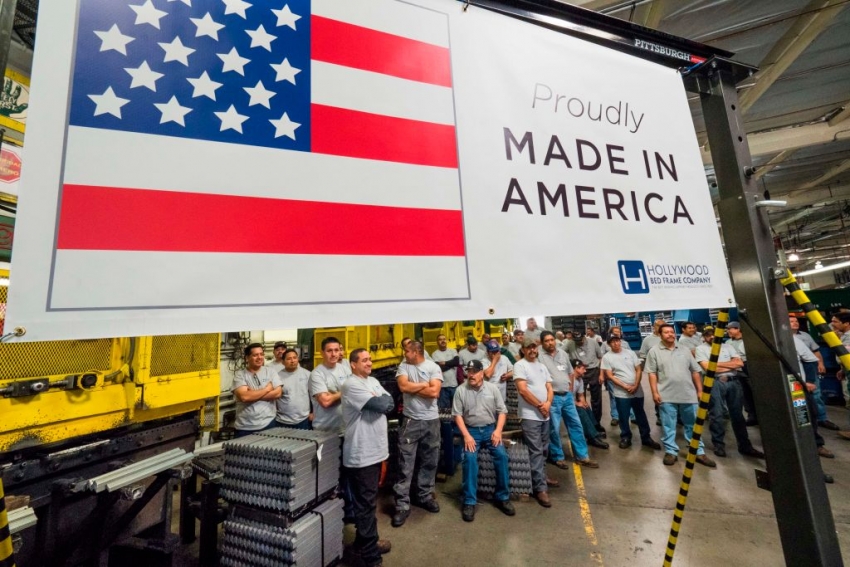 In his crisp, persuasive and deeply reported book, Louis Uchitelle argues that domestic manufacturing is crucial to the welfare of the U.S. working class and that the federal government should intervene decisively to ensure the sector’s health. (ROBYN BECK/AFP/Getty Images)

Manufacturing, once nearly a third of U.S. gross domestic product, has dwindled to around 12 percent, a punch to the gut for the American working class. Indeed, the sufferings of that sector’s former workers—and of those who live in once-thriving factory towns—may be responsible for Donald Trump’s extraordinary and catastrophic victory over Hillary Clinton in November.

A billionaire fixing to wage a horrific war on the working class now that he is president—by gutting its healthcare and labor rights—Trump nonetheless seemed to be listening to these forgotten people during his campaign. He went to their towns. He spoke with compassion about opioid addiction. He promised to “Make America Great Again,” a racist slogan, to be sure, but also a seductive one, implying that under Trump, American workers would enjoy the prosperity of bygone manufacturing days. We would make things again and feel proud of ourselves.

It was all bullshit, of course. Trump’s idea of industrial policy is to exaggerate how many jobs in Indianapolis he saved with a phone call and some tweets. Louis Uchitelle, by contrast, is serious about what the issue means for American workers. In his crisp, persuasive and deeply reported book, Making It: Why Manufacturing Still Matters, the veteran journalist argues that domestic manufacturing is crucial to the welfare of the U.S. working class and that the federal government should intervene decisively to ensure the sector’s health.

Without manufacturing, the “labor force participation rate” in the United States—people either employed or actively looking for jobs—has declined dramatically since 1998, as millions of laid-off workers have simply dropped out of the workforce. Not only those workers, but many of their children, have been unable to find good jobs. Uchitelle recalls that when he started reporting on the sector in the 1980s, line workers often told him that their children would “do better” than they had, meaning they would make more money.

“That did not happen,” Uchitelle writes, “and gradually the expression—and the expectation—have both disappeared.”

The liberal punditocracy—because of Trump’s cynical use of the manufacturing issue, as well as its own contempt for workers—has been a font of misinformation on this subject ever since the election. Syndicated columnist Jill Filipovic excoriated an old order in which “white men” without college degrees enjoyed “unearned benefits.” Writing in Slate, Jamelle Bouie claimed that journalists and politicians pay more attention to the woes of manufacturing workers than they should. Why is that? Because, Bouie crows, those workers are “mostly white and mostly male.” Paul Krugman picked up this bit of insight and trumpeted it gleefully in his New York Times column. But these demographic generalities, while crudely true, are breathtakingly beside the point. About a third of manufacturing workers are women, and African-American men are slightly overrepresented in the sector versus their share of the overall workforce. Don’t these workers also matter?

When elite pundits gas on in this manner, they ignore many of the Americans most devastated by the loss of factories: black workers in major cities and the black people who live in such cities. Uchitelle’s book convincingly argues that the federal government’s failure to stop jobs from moving, not only from Detroit to China, but from urban neighborhoods to rural areas, is a “civil rights” issue.

On this and other points, Uchitelle makes a persuasive case that, contrary to what we are always told, the loss of manufacturing in the United States was never a natural or inevitable phenomenon, but a political one. Governments heavily subsidize this sector, he explains, as they do in all advanced nations that claim manufacturing as a significant share of their economy. We, the taxpayers, already subsidize factories so significantly, Uchitelle argues, that they are partly public institutions. It would be reasonable, then, to insist that they serve the public.

We could subsidize, and provide hefty incentives for, operating in cities where unemployment is high, allowing unions and negotiating fair contracts, hiring black workers, and, perhaps most critically, agreeing not to pack up in 10 years and move overseas. As it is, he observes, a patchwork of local subsidies simply pits municipalities against one another, wasting public money in a bidding war to temporarily lure jobs to one small town or suburb over another.

The American workers suffering from the loss of manufacturing are not only those left unemployed, but those who find work in much lower paying, non-union sectors, like retail. But since, as Uchitelle argues, much of what made manufacturing great in the past was unions, it’s reasonable to ask: Do workers really need this sector to prosper? Can’t any sector make the working class great again, with enough political might? Can’t workers, through union organizing and living wage policies, win better pay and benefits through the growing service and healthcare sectors?

Surely, a daycare worker contributes more to society than a person who makes televisions—and we can all agree that it’s sexist that she isn’t rewarded with the respect and compensation that the latter worker once enjoyed. Former factory workers employed at Walmart have sometimes told me they preferred retail work—less repetitive, more social—but wished it paid better. Factory labor is also hard on workers’ bodies. A middle-aged black Uber driver in Chicago, who’d worked in that city’s factories for years, told me, praising his new gig, “This is better. The wear and tear is all on the car, not on me.” Could Uber drivers and Walmart cashiers ever become part of a prosperous working class like the assembly workers of the past?

Of course, the labor left must assume yes, and fight like hell to make it happen. But it’s clear there are structural challenges. Workers organized for decades to make manufacturing work pay. Unions have been trying for years to organize these new sectors, with some successes, but it’s clearly an even steeper climb.

As Uchitelle makes clear, part of the reason for this is that factory work is much more “productive” than labor performed in stores, restaurants or taxis, which in economic terms means that it generates far more wealth for the employer. In 2015, profits per employee in the manufacturing industry were more than double those in retail and more than nine times those of the hotel and restaurant industry. That means there is more money that can be expropriated by the workers.

Uchitelle also mentions the multiplier effect of manufacturing: Manufacturing creates many other jobs outside factories, including in transport, construction, retail or finance. (Uchitelle’s own father, a textile broker, had such a job). Every dollar generated by the manufacturing industry generates at least $1.48 elsewhere in the economy, more than any other sector. A retail dollar, by contrast, has a broader economic impact of just 54 cents.

Uchitelle notes, too, the solidarity of working side-by-side on the assembly line, making things together, as a powerful driver of the union power of the past. Additionally, when workers performing manual labor are so productive and creating so much wealth for the larger economy, as manufacturing workers were 50 years ago, they are more valued and there is broader societal political support for their unions and for compensating them well.

Uchitelle ends on a pessimistic note: We need a national industrial policy but are unlikely to get one. Surprisingly, he doesn’t say much about the opportunity we have now (after electing a different federal government, clearly) to reinvigorate the sector along cleaner, greener lines, making things like solar panels, lithium batteries, electric cars and wind turbines.

I don’t want to give Trump any policy advice—I just want him to go away—but as economists like Bob Pollin of the University of Massachusetts-Amherst have argued, a “Green New Deal” could create jobs and help address pollution and the climate crisis all at once. While the planet can’t vote, other immediate beneficiaries would include displaced white Trump voters as well as the black and immigrant urban factory workers who have never been part of what might generously be called Trump’s vision.

Apart from Uchitelle’s convincing arguments for the economic importance of manufacturing, he also suggests that when we don’t make things we take less pride in ourselves as Americans. Many of us—including this reviewer—feel strongly that it’s a slippery slope from the pro-union “buy American” exhortations of the 1980s to xenophobia and Trumpism. Still, we shouldn’t dismiss the role of physically making things in fostering social cohesion and a culture of respect for the working class. There’s also something healthy about a country in which at least some of the workforce is engaged in building tangible stuff that we can all see.

When domestic manufacturing prospers, objects you use every day—the car you drive, the shoes you wear—become propaganda for working-class labor and achievements. And while Uchitelle—a former New York Times reporter—is too respectable to say so, that may be one reason why manufacturing has been central to most large-scale socialist projects. It may also be why Trump won.

Liza Featherstone is the author of Selling Women Short: The Landmark Battle for Workers’ Rights at Wal-Mart.