This is Why Labor Should Care About Virginia’s Gubernatorial Primary 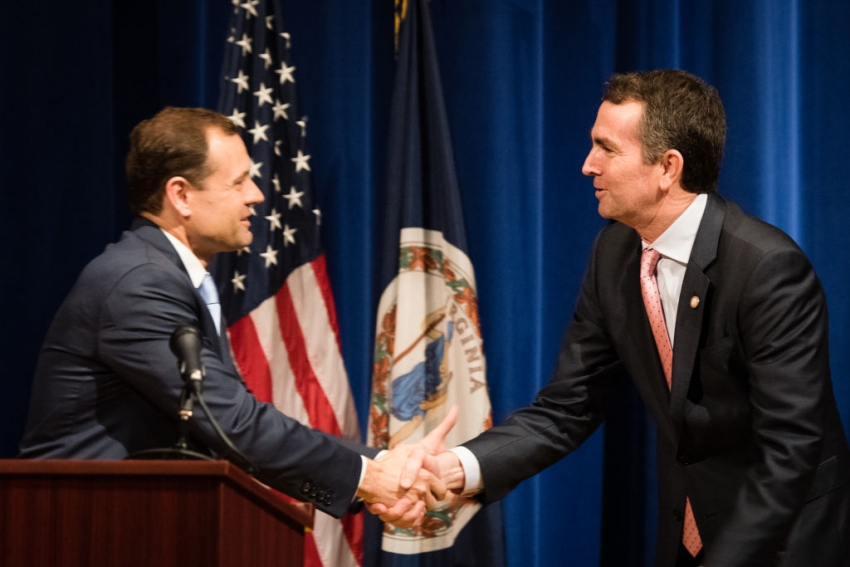 Much like the open shop referendum last year, this year’s gubernatorial election in Virginia is significant for labor. It’s a chance to contest the open shop in a region that has long seemed closed to any pro-labor advances on the issue. (Photo by Sarah L. Voisin/The Washington Post via Getty Images)

Last year, I wrote about the open shop referendum in Virginia, calling it the most important election for the labor movement in 2016. While Virginia has been a “right-to-work” state since 1947, supporters of the referendum argued that a constitutional amendment was necessary to prevent Democratic Attorney General Mark Herring or future Democratic legislative majorities from overturning the statute.

In a year where the election of an anti-labor president coincided with votes in Alabama and South Dakota that affirmed the open shop, Virginia gave labor its brightest victory: Almost 54 percent of voters across the Commonwealth rejected the constitutional amendment. And the “no” vote was spread out across the Commonwealth, with places as disparate politically as urban Arlington and rural Accomack voting against the measure, which was bitterly opposed by Virginia’s labor movement.

Much like the open shop referendum last year, this year’s gubernatorial election in Virginia is significant for labor. It’s a chance to contest the open shop in a region that has long seemed closed to any pro-labor advances on the issue. The primary vote is set for Tuesday and the labor movement would do well to make its presence felt.

Spread of the open shop

Politically, the open shop has been something of a settled matter in most of the South.

One of the first open shop statutes passed in Florida in 1944. As Gilbert Gall recounts in his Labor Studies Journal article, leaders of the American Federation of Labor (AFL) were slow to respond to the calls from its state affiliates for assistance in defeating the measure:

“.....President Green affirmed that the AFL wanted to help, but, he added, ‘it is expected that the Florida labor movement will do its part.’ He then chastised (Florida labor leader W.E.) Sullivan for the recent defeat of a liberal Florida Congressman, stating that he could not ‘understand why labor in Florida did not make a better showing.’ If it had, Green argued, it would have had ‘a tremendous moral effect’ against the coming Right to Work amendment, though exactly how he did not say.”

Floridians would go on to approve the measure with about 55 percent of the vote. While the open shop would end up spreading to places like Nebraska, South Dakota and Iowa over the next three years, it was the South where the concept really took hold. By the end of the 1950s, nearly all of the southern states would have right-to-work legislation on the books.

A chance for change

Given that history, it may not come as much of a surprise that the political support for Virginia’s status as an open shop state has been bipartisan. The current governor, Terry McAuliffe, gave a speech to business leaders pledging his full-throated support for the law during his 2013 gubernatorial run and has stated that he would not seek to change it as governor.

This brings us to the Democratic gubernatorial primary this year, which features a race between Lt. Gov. Ralph Northam and former U.S. Rep. Tom Perriello.

Northam, a former state senator and erstwhile potential party-switcher, began the race as the favorite after Herring decided to forgo a run for governor and seek re-election as attorney general. He lined up the endorsement of McAuliffe as well as a fundraising advantage of about half a million dollars. Perriello, who upset arch-conservative U.S. Rep. Virgil Goode in the 2008 congressional election, has closed the gap by turning the election into a referendum on Donald Trump.

But here’s the reason why this election is so important to labor: Perriello has taken a strong stance against the open shop. In an article outlining his campaign’s “Plan For Working Families”, Perriello states that:

“Too often, workers in Virginia don’t get the protections they need to earn their rightful pay and maintain consistent hours. Wage theft, the denial of benefits, and reduced bargaining powers are all side effects of a long, sustained attack on workers’ rights in Virginia. Workers do better when they have strong unions, and the decline in union membership is a major reason why wages have effectively flat-lined since the 1970s. That’s why I oppose so-called ‘right to work’ laws that kneecap unions from helping workers bargain for higher wages.”

He has defended this stance in gubernatorial debates as well, noting that he would fight for a repeal of the law even though it is unlikely to pass through a General Assembly that is dominated by Republicans. Northam, on the other hand, has called for Democrats to focus on other labor issues such as sick leave and an increased minimum wage instead of “pick(ing) fights that we perhaps can’t win right now.”

Sick leave and a minimum wage increase are important, for sure, but without a strong labor movement, it is hard to get the popular groundswell needed to prod legislators to make positive moves on those issues, either. Democrats should be united in their opposition to a policy that drains resources from labor unions and seeks to undermine the growth and stability of the movement as a whole.

Another major victory for the labor movement in Virginia could have major implications for the AFL-CIO’s strategy in the South further down the line. We should ensure that such a big opportunity is not missed.