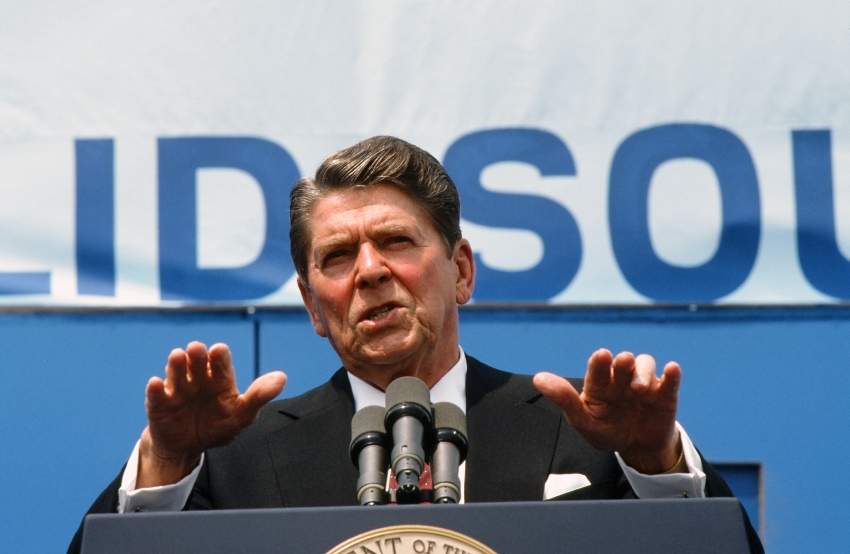 During the course of his presidency, Ronald Reagan became the most powerful union buster in the world. (Robert R. McElroy/Getty Images)

On Thursday, Labor Secretary Alexander Acosta announced that former President Ronald Reagan will be entering the Labor Department's Hall of Honor, joining the ranks of luminaries ranging from Mother Jones to Eugene Debs.

In his announcement, Acosta cited Reagan's tenure as the president of the Screen Actors Guild, along with a series of personal anecdotes, to explain that the Gipper was a friend of the working class. However, one does not have to be a history scholar to understand that Reagan was in fact an enemy of organized labor throughout his presidency.

To start, we can look to his firing of over 11,000 air traffic controllers in 1981. “More than any other labor dispute of the past three decades, Reagan’s confrontation with the Professional Air Traffic Controllers Organization, or Patco, undermined the bargaining power of American workers and their labor unions,” Joseph A. McCartin, a professor of history at Georgetown University, wrote for the New York Times in 2011.

Reagan was enraged after thousands of air traffic controllers walked off the job—the result of the Federal Aviation Administration refusing to meet the bargaining demands of the Professional Air Traffic Controllers Organization. The union wanted a wage increase for controllers and a slightly shorter workweek. Reagan responded by firing the controllers when they refused to return to work.

Richard Wolff, a professor of economics emeritus at the University of Massachusetts, Amherst, claims that unions never really recovered from the blow Reagan delivered in 1981. “The labor movement until that time had come to believe that it was strong enough that, even if it had a rough battle, it could work a compromise and salvage certain basic safeties, such as not replacing people during the strike,” Wolff tells In These Times. “All of these conventions and assumptions were smashed.”

That was just the beginning. During the course of his presidency, Ronald Reagan became the most powerful union buster in the world. He stacked the National Labor Relations Board with officials who vehemently opposed unions, causing long-term damage to collective bargaining and workers’ rights in the United States.

After the air traffic controller debacle, corporations became emboldened and targeted unions with a new zeal, illegally firing workers for organizing with the knowledge that they could largely evade punishment under Reagan’s labor board.

Since the middle of the 1970s, union membership has dropped from 26.7 percent of the workforce to just 13.1 percent, and Reagan played a significant role in that decline.

Reagan's attacks on unions, along with his pro-corporate economic policies, also had a major impact on the income of working-class Americans. Wages for the bottom 70 percent of American wage earners have been stagnant since around the time Reagan took office, according to the Economic Policy Institute.

Among other factors, this lack of growth can be attributed to the steady reduction in union membership, as well as anti-worker trade policies implemented under Reagan and successive administrations.

Reagan’s economic agenda was focused on pursuing policies that increased the wealth of the rich, including reducing the top income tax rate from 70 percent to 28 percent, while increasing the tax burden on the working and middle classes.

“By weakening the labor movement, Reagan certainly contributed to its inability to do better than keep stagnant wages,” Wolff says. “Whereas before Reagan, real wages had risen steadily across a 30-year period.”

To portray Ronald Reagan as a friend of the working class is not only fallacious—it is dangerous. If the Trump administration does indeed see the Reagan years as a model for its own policies, as seems to be the case, it’s likely that income inequality will continue to rise while U.S. workers continue to struggle for a decent standard of living and dignity on the job.