University of Chicago Grad Students, After Being Told Their Labor Isn’t Work, Vote on Union 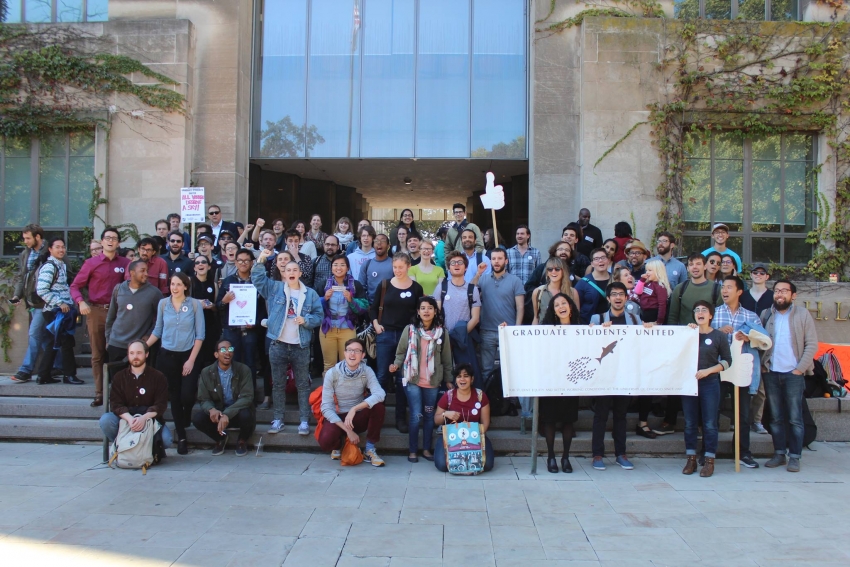 After months of legal battles, delays and high-dollar opposition from their administration, University of Chicago graduate students will vote in a union election on October 17 and 18. A win will make Graduate Students United (GSU)—affiliated with the AFT, IFT and AAUP—the official representation of UChicago’s graduate students.

The election is being conducted against the backdrop of an ongoing court battle over grad student unionization that represents a double-edged sword for the university. A victory would decertify the union, and complicate grad student organizing at private institutions nationwide. But over the course of the case, the university’s hardline anti-union statements both in and out of court may have helped the union’s cause more than hurt it.

The labor is not work defense

In 2016, in response to a petition by graduate students at Columbia University, the NLRB ruled that graduate instructors at private institutions could unionize, certifying that students can be classified as workers. The ruling set off a wave of union elections at private institutions, including the University of Chicago, where grad students filed for recognition this spring. UChicago’s administration challenged the filing, arguing that while some grad students are workers, its students are not.

UChicago insisted it wasn’t attacking the standard set by the 2016 Columbia ruling. Columbia’s students instructors, it conceded, worked when they taught, whereas UChicago’s didn’t. According to the UChicago administration, its grad students, unlike Columbia’s, didn’t provide any financial benefit to the university through their teaching, tutoring, grading or research.

The university's administration had to make provocative claims in support of this argument. First, it maintained that the entire university is run primarily for graduate students’ benefit. Quality undergraduate education, officials testified, was a “second goal.”

UChicago was also forced to argue that no grad student labor—including teaching entire courses—had a benefit to the university more important than the experience it provided grad students. Professors with administrative positions and funded chairs testified that grad-student graders made grading more difficult and research assistants slowed down their research.

Attorneys for the university from the international firm Proskauer Rose, an employer favorite in labor cases, issued a standing objection to every use of the word “work,” “salary,” or “compensation” for graduate students’ services—including slips by their own witnesses. (University officials have also opposed any use of “labor” and “employee” in the same context.)

The university lost its case in an August 8 decision issued by Regional Director Peter Sung Ohr. The decision classified UChicago’s grad students as workers within the Columbia standard, upheld their proposed bargaining unit (which UChicago’s administration contested on multiple counts), and directed an election. Ohr included a section on grad labor’s benefits to the university—”some departments,” he wrote in the 27-page decision, “rely on graduate students in order to provide this excellent education.”

In the short run, the university’s legal bid may have backfired. Its arguments drew the ire of many grad students—and some professors—who were surprised to be told that their efforts in the classroom, office and lab weren’t work.

One graduate organizer tells In These Times that graduate students were alienated by the university’s argument that any benefit of grad labor was “incidental.”

“I think for a lot of people who were on the fence, hearing that was a slap in that face,” says Claudio Gonzáles, a GSU organizer and mathematics doctoral student.

“The labor that they're doing needs to be done. There's no getting around this,” says Anton Ford, an associate professor of philosophy at UChicago who also testified at the hearing.

The university’s PR blitz against the union may also have done its case more harm than good. “I think it was very startling to a lot of students, these lawyers coming so aggressively at us and the work that we do, the work that we’ve always internalized as work,” Gonzáles says.

Historically anti-union, the university has led a recent charge by several elite private universities—including Harvard, Yale, Columbia, Brown and Duke—to block the formation of grad unions. Many of those schools borrow directly from UChicago’s talking points against unionization.

The administration warned students and faculty that the union would be an interfering third party, gutting the university’s prized status as a home of academic freedom and interfering with direct relationships between faculty and grad students. The university has spread this message through a polished and professional website, small-group meetings with grads opposing the union, and mass emails to grad students, including a last-minute salvo from executive vice provost David Nirenberg in advance of the election.

Yali Amit, a professor of statistics at the university since 1991, is skeptical of these arguments. “I don’t believe that [the university’s opposition] really stems from a worry that some fundamental relationship between grad students and faculty will change,” he says. “I just find it hard to believe.”

“The union is a bunch of graduate students,” continues Amit, who testified for GSU before the NLRB. “They’re getting support from the AFT, but fundamentally, the union, the local, is going to be a bunch of graduate students that are interested in doing their research and getting their Ph. D. They’re not interested in changing the way the university works.”

A recent move by the university that complicates the union election procedure, distributing voting into four locations based on last name, has reignited GSU claims of “major admin obstruction.” Sources present at the pre-election hearing say NLRB representatives divided the locations at the request of University of Chicago lawyers—a claim the university denies. The location instruction sheet attributes the move to voter fraud concerns.

In response to a request for comment, a University of Chicago spokesperson referred In These Times to the university’s "Know the Facts" page.

Meanwhile, the court battle isn’t over. After losing its case, the university administration fell back on a request for review, which contests the regionally binding decision by appealing to the national board. According to the administration, that request is still under consideration.

The university may be onto something: The NLRB is notoriously fickle on private-school graduate unions. Since 2000’s New York University case, which first brought private university graduate workers under the board’s jurisdiction, each presidential administration has seen the NLRB flip-flop on the question.

In 2004, George W. Bush’s NLRB appointees turned the tide and sided with Brown University’s administration in a reversal of the 2000 case. The Brown decision marked a win for that school’s administration. Its then-Provost Robert Zimmer, who issued the university’s public statements against grad student unionization, is now the University of Chicago’s president.

That decision stood until 2016, when Obama appointees overturned it in favor of Columbia's graduate union. A successful appeal by the University of Chicago won’t overturn that ruling. But it would establish a complex and challenging standard for private graduate unionization.

The Trump administration filled the board’s last vacancy on September 25, with appointees who were vocally opposed by labor. The future of the UChicago hearing—and the entire Columbia precedent—is in the new board’s hands.

But GSU’s campaign has picked up some prominent allies: Bernie Sanders addressed a letter this week to University of Chicago grad students in support of their right to unionize, a highly visible boost for the union campaign in the days before their election. And on Saturday, Chelsea Manning sent a message of solidarity to GSU members on Twitter.

Whatever the outcome of the election and the court case, there’s reason to believe that the possibility of unionization has changed the game for grad students at UChicago, pushing administrators to address quality-of-life issues and improve pay and benefits. “It’s pretty clear to me that a lot of the initiatives that the university has undertaken for graduate students are the result of GSU actions,” Amit says.

At the request of the University of Chicago, this article has been updated to clarify that the NLRB has final authority over election procedures. An earlier version attributed location instructions directly to the university.