Why We Shouldn’t Fall for the Members-Only Unionism Trap 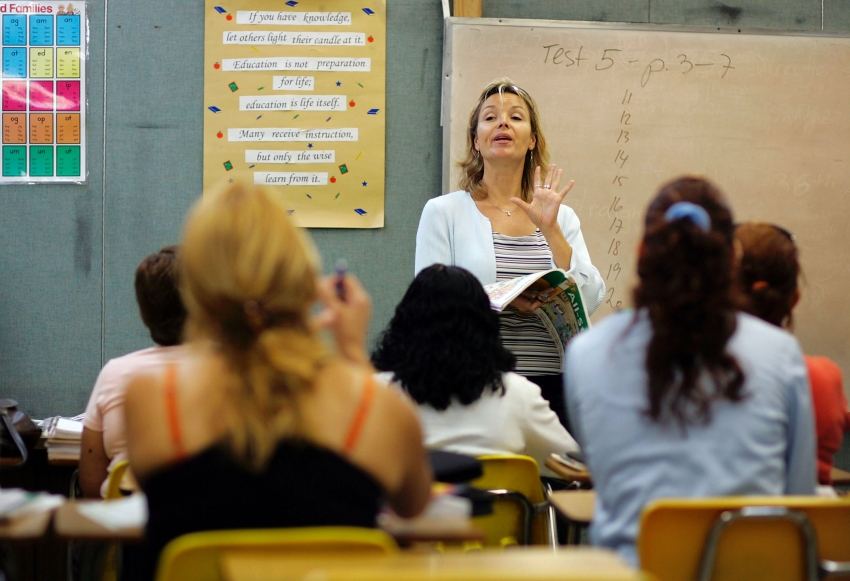 The case of teachers in Tennessee shows the dangers of members-only unionization. (Photo by Joe Raedle/Getty Images)

One of corporate America’s next big goals might surprise you: passing legislation to prevent unions from having to represent workers who don’t pay dues. This is just the latest of many business-friendly labor law reforms proliferating across the country.

Over the past decade, the Republican Party has ascended to become the dominant political force in the U.S. government, controlling two-thirds of state legislatures, a majority of governorships, both houses of Congress and the White House. Conservatives also make up a majority on the Supreme Court. This growth in power of the GOP has also given rise to a new slew of anti-union legislation.

States in over half the country have passed open-shop laws, euphemistically referred to as “right-to-work.” And an upcoming Supreme Court case, Janus v. AFSCME, makes it likely that the country’s entire public sector will become open shop in the next year.

This means that the nation’s public workers, from firefighters in California to public school teachers in Maine, will be able to receive the benefits of unionization without being required to pay fees for union representation.

In an open shop, unions have a legal duty to expend resources representing everyone who is covered by a union contract, even if those individuals are not union members and pay nothing for the benefits they receive. This is commonly known as the “free-rider problem.”

Some union supporters have argued that the way to solve the free-rider problem is by allowing unions to simply kick out the “freeloaders.”

For example, in a Los Angeles Times op-ed, professors Catherine Fisk and Benjamin Sachs advocate for reforming labor law so unions in open shop states would not be required to negotiate on behalf of all workers, but would instead only represent dues-paying members.

Labor activist Shaun Richman has written for In These Times about the benefits of “members-only” unionism, which, he says, would allow unions to “cede exclusive representation and kick out the scabs.”

What do right-wing advocates of this strategy hope to accomplish? For an answer, we can look at the case of unionized teachers in Tennessee.

For 140 years, Democrats were the dominant political party in the Tennessee state legislature. That streak came to an end in 2010 when the Republicans became the state’s majority party for the first time since Reconstruction.

The GOP majority’s first major legislative priority? Reforming the state’s collective bargaining law for public school teachers in the hopes of undermining the largest and most politically powerful union in the state—and my former employer—the Tennessee Education Association (TEA).

The result was the Professional Educators Collaborative Conferencing Act (PECCA), signed into law in 2011, which outlines a process for “interest-based” bargaining between two teams: one representing teachers and another representing the school board. This process is referred to as “conferencing.”

The goal of conferencing is to produce a legally binding Memorandum of Understanding (MOU) that covers all teachers employed in the district regardless of what organization they actually belong to, if any.

But unlike the previous law, PECCA forbids the MOU from including language that would make any one organization the exclusive representative of teachers in the district. This means that multiple organizations compete to recruit teachers as members—and to represent them during conferencing.

Prior to conferencing, the school district holds a secret ballot vote in which teachers choose among several organizations to represent them. Organizations earn a number of seats on the teacher conferencing team in proportion to the total number of votes they receive—meaning that the teachers’ team could include members of competing organizations with very different negotiating goals and organizational resources.

In practice, the choice often comes down to an affiliated union local of the Tennessee Education Association and the Professional Educators of Tennessee (PET), a self-described “professional association” that claims to represent teachers while advancing broader corporate interests.

When labor activists imagine a world of competing members-only unions, they typically express hope that it will give rise to more militant, progressive and rank-and-file-led organizations that will challenge unions from the left. The experience in Tennessee, however, shows that this competition can produce further fragmentation as unions face business-aligned challengers from their right.

The Problem with PET

PET is part of the “coalition of independent education associations” (IEAs), a national network of organizations that bill themselves as “alternatives” to unions. IEAs compete with unions in two dozen states, providing liability insurance, professional development and some legal representation—often at a cheaper rate than union dues.

Many IEAs support anti-union legislation, like right-to-work, and have strong ties to deep-pocketed organizations pushing education privatization, such as SPN and the American Legislative Exchange Council (ALEC).

PET has deep roots in the corporate education movement. J.C. Bowman, PET’s director, previously served as the director of Florida’s Department of Education Choice where he oversaw Florida’s statewide voucher program (the first in the country). He also formerly chaired an ALEC sub-committee on union affairs and spent years advocating for vouchers and charter schools while working for a number of free-market think tanks.

In 2011, PET publicly advocated for PECCA and the end of “monopoly collective bargaining” on behalf of anti-union teachers who were being “forced to accept representation they do not want.”

Republicans explicitly made the connection between passing PECCA and weakening political opposition to their privatization agenda. When the law passed, Tennessee’s lieutenant governor Ron Ramsey praised PECCA as ending an era that provided “a single government employee union the power to stifle education reform in the state of Tennessee."

Since the passage of PECCA, PET has partnered in a union opt-out campaign with the SPN-affiliated Beacon Center of Tennessee, one of the most prominent pro-voucher and pro-charter lobbyists in the state, publishing editorials attacking TEA and encouraging teachers to drop their membership.

Carr, now a Republican candidate for state senate, believes passing PECCA was important because “the [TEA] is a hindrance to education reform.”

“The leadership in the TEA and NEA has historically had a very socially progressive agenda, a very union agenda, and I see PET as a threat to that,” he says. “PET came along and said, ‘Hey, we can offer you insurance and services at a better price without the agenda.’”

At the local school level, PET recruits teachers by appealing to a combination of social conservatism and cheap services.

“They play on social issues like the Republicans do, claiming that the union promotes abortion,” says Carol Hambright, former president of the Polk County Education Association, a TEA affiliate. She cites this as a primary reason PET has had success in schools, along with the price, since PET dues are less than half of those of TEA.

“If the only reason to join is insurance or a lawyer, then teachers go for the cheaper option,” Hambright says.

PET competes with TEA not only for membership, but for votes to represent teachers in the conferencing process.

When PET does receive enough votes to qualify for seats on the teacher team, they often undermine the union at the conferencing table.

In Polk County, the union was furious when PET sided with management in opposing binding arbitration as the final step in the school district’s grievance process.

According to Constance Brown, the treasurer of another TEA affiliate in Clarksville-Montgomery County (CMCEA), the presence of PET has emboldened management by signaling to them that the teachers in the district are divided.

“If management were talking exclusively to CMCEA, then there is no doubt that our team would be in a stronger position,” Brown says.

Management can also actively sow division by promoting PET in the schools.

After the TEA won a lawsuit against the Washington County school district and successfully overturned a dismissal of a tenured teacher, the director of schools invited Bowman to speak at a county-wide teacher meeting and had PET membership brochures distributed to teachers in the district.

“One of the assistant administrators came through the hallway knocking on teachers’ doors, with a roster of teachers, handing out a propaganda flyer encouraging teachers to join PET and drop the TEA,” says Jamie Freeman, who has taught social studies for 16 years in Washington County public schools.

According to Freeman, the administrator put a check mark next to his name on the roster and handed him the pamphlet saying, “This is complements of the director of schools.”

For Freeman, the message was clear.

“The director is trying to weaken our union membership,” says Freeman.

PECCA was designed to weaken the teacher union—and it has. Membership in the union has dropped while PET’s has slowly grown, though it still only represents a fraction of the number of teachers that the union does. In 2011, prior to the passage of PECCA, there were over ninety negotiated contracts between teachers and school districts across Tennessee. Today, under the new law, that number has plummeted to just three dozen.

It is little wonder then that similar legislation is at the very heart of the Right’s multi-million dollar plan to “defund and defang” public sector unions across the country, as laid out in SPN documents published in August by The Guardian.

These documents reveal an anti-union legislative “toolkit” that the SPN created for Republican policymakers. A central part of this toolkit is so-called “Worker’s Choice” legislation, which would eliminate the duty of unions to represent non-members and allow for non-union workers to negotiate their own private contract with their employer outside the collective bargaining agreement.

Worker’s Choice has many similarities to PECCA: both laws promote the same type of “members-only” unionization that effectively divides workers and weakens unions while rendering union complaints about “free-riders” moot.

PET and the Beacon Center are part of a nationally coordinated campaign called “Employee Freedom Week,” which advocates for unionized workers to drop their membership and promotes the adoption of Worker’s Choice legislation at the state level.

Facing massive membership losses and smaller budgets, many union leaders and activists might be inclined to go along with this kind of legislation. This is a dangerous path—and not just because it creates an opening for business-aligned organizations like PET to compete with unions.

Rather than members-only unionization being a stepping-stone towards building a majority membership organization, this approach can become a shortcut for unions to spend fewer resources by narrowing the scope of outreach and organizing to only dues-paying members.

Ceding exclusive representation in order to write non-members off rather than winning them over will not result in the labor movement growing or becoming any more militant or successful.

Such an approach only sets the stage for further membership decline and union marginalization.