Postal Banking Could Become a Reality Even Without Congress. Here’s How. 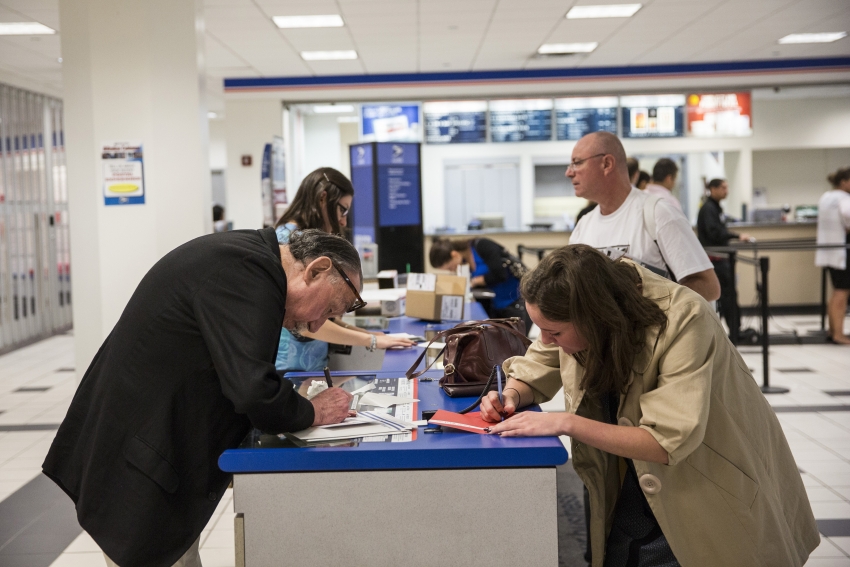 Advocates see both money orders and remittances as a launching pad for advancing postal banking in the United States. (Getty Images)

In this case, Gillibrand was aiming to solve a major problem in America of financial inclusion: Over one in four households have little or no access to banking services, causing them to use high-cost alternatives like check-cashing stores or payday lenders, which gouge them with exorbitant fees and create cyclical debt. If the post office, with over 31,000 locations across America and significant trust from citizens, were to offer simple banking services as it did from 1911 to 1967, it could potentially solve the inclusion problem, save billions of dollars for vulnerable populations, and help modernize and stabilize the postal system in an era of electronic communication.

But there’s one thing missing from most of the largely positive coverage of the Gillibrand bill—we already have the building blocks for a postal banking system in the United States ready to go, without the need for authorization from Congress. Or at least we would have it, if the U.S. Postal Service stuck to the promise it made to one of its biggest unions two years ago.

In 2016, the American Postal Workers Union (APWU), representing nearly 200,000 clerks, maintenance workers and other postal employees, engaged in a quiet campaign to make postal banking a reality. They took the concept to the bargaining table in their most recent contract negotiations. “We made the argument that you’re asking for cuts, but you haven’t looked into new ways we can bring in revenue,” says Katherine Isaac of the Campaign for Postal Banking, the APWU’s public coalition for the effort.

In July 2016, the APWU and the Postal Service reached agreement on a contract, and tucked inside was a Memorandum of Understanding (MOU) on “Enhanced and Expanded Services.” The MOU established a joint labor/management task force, required to meet monthly and consider pilot programs for “opportunities to increase revenue that also provide a positive financial contribution.” These included two specific ideas: “modernization of money orders” and “expansion of international money transfers.”

In 2015, the Postal Service sold $21 billion worth of money orders, a secure certified check. In recent years, however, postal office money order usage has fallen off. Modernizing the service, as proposed by the USPS Office of Inspector General, could include selling money orders digitally, enabling person-to-person money transfers online or through mobile phones, or creating prepaid, reloadable credit cards.

A pilot program could also expand the post office’s “Dinero Seguro” money transfer service to 60 locations around the world, through the Universal Postal Union (UPU), a UN agency that coordinates international postal services. In 2016, immigrants and those with relatives abroad wired more than $138 billion in remittances from the United States. But Dinero Seguro currently only reaches four of the top ten remittance markets in the world, and services a tiny 0.01 percent of all transactions. The infrastructure for expanding international money transfers is already built through the UPU, the USPS need only plug in.

Advocates see both money orders and remittances as a launching pad for advancing postal banking in the United States, under USPS’ authority to expand existing products. Such pilot programs would help work out the kinks of postal banking, and create demand to bring it to more parts of the country. It also doesn’t require anyone in Congress to give the go-ahead. The Postal Service can’t authorize everything on its own—short-term loans, for example, would be a new product that would probably require legislative sign-off. But pilots could create the environment to get Congress interested in pursuing a national postal banking program.

According to the Campaign for Postal Banking, the APWU proposed three likely locations for the pilot programs: Baltimore, Md., Cleveland, Ohio and the Bronx, New York—where 52 percent of households are either unbanked or underbanked. According to the 2016 MOU, at least one pilot program had to be launched within a year. But while the joint task force held field hearings, the pilots never happened. “They’re dragging their feet,” Isaac says.

The union has been working under the radar to nudge the Postal Service into action. The office of Sen. Elizabeth Warren (D-Mass.), who supports postal banking, confirmed that she recently met with Postmaster General Megan Brennan to discuss the issue. But so far Brennan hasn’t committed to anything.

The USPS hasn’t responded to a request for comment on the MOU or the Warren meeting. In the past, the agency has only said “our core function is delivery, not banking,” and that it could not move forward without regulatory and legislative approval. That’s a cramped reading of the Postal Service’s mandate, which clearly allows agency management to expand and enhance existing services.

One problem involves the governing body of the Postal Service, the Board of Governors. Incredibly, no appointees have been confirmed to the nine-member panel, which directs policy for the Postal Service, since 2010. All nine slots are currently vacant, meaning Brennan and her deputy make up the entire board. That’s a lot of power in the hands of one woman who appears reluctant to make big decisions, especially amid the Postal Service’s manufactured fiscal crisis from having to pre-fund health and retirement benefits 75 years out, something no public agency or private company must do.

The Campaign for Postal Banking is organizing in the three proposed pilot cities, trying to build mass community support for the programs. With the APWU’s current contract expiring in September, postal banking will almost certainly come up in the next round of negotiations, given what could be perceived as a broken promise.

This is where Sen. Gillibrand’s legislation can help. By raising attention to postal banking, Gillibrand could jump-start the critical support necessary to get pilot programs up and running. She represents the Bronx, which seems like a natural place to start.

Gillibrand could also help fill seats on the Postal Service Board of Governors. David Williams, who in 2014, while serving as USPS Inspector General, wrote a celebrated white paper endorsing postal banking, is one of three active nominees for a Governor slot. In April, he and two other nominees, Calvin Tucker and Robert Duncan, faced a confirmation hearing in the Senate Homeland Security and Government Affairs Committee. While Gillibrand isn’t on the committee, she and other Senate postal banking supporters could push within the Democratic caucus for a floor vote.

Senate Democrats are often accused of obstructing Trump’s nominees. But advocates believe Williams, whose paper was essential to sparking renewed interest in postal banking, could help advance the program. “We can’t imagine a better advocate on the Board of Governors,” Isaac says of Williams.

Both inside and outside approaches are critical to making policy advances. Postal banking legislation, even if it cannot pass under the current Congress, can expand support and set a goal. But the path of pushing pilot programs through the APWU contract can create forward momentum without the usual Congressional partisanship and gridlock. If these strategies can successfully join forces, you may soon be able to see banking services at a post office near you.