Unions Can Protect Workers From Deportation. This Coalition of 3.5 Million Is Showing How. 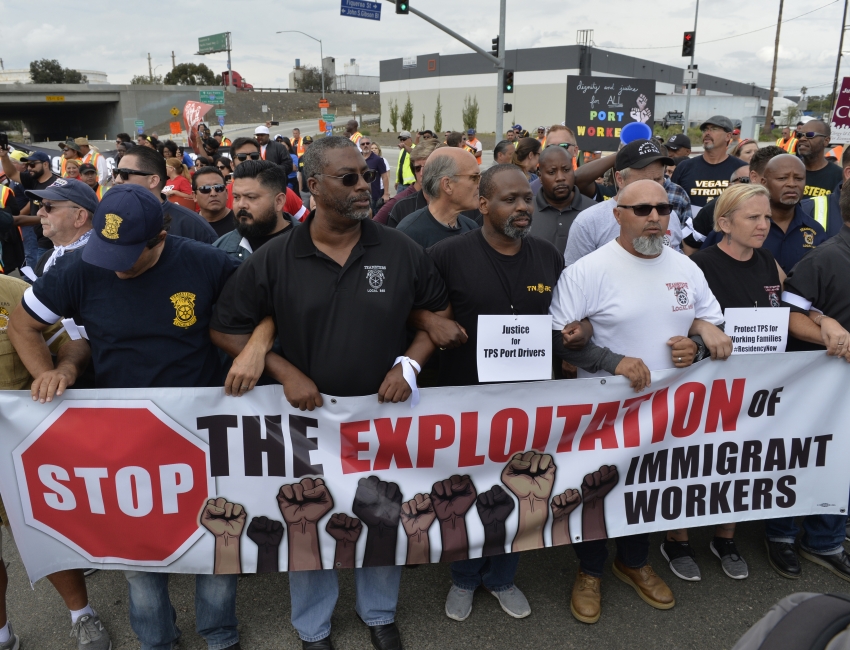 After more than two decades living, working, and building a family in the United States, Cesar Rodriguez feels his life is in limbo. The driver for the Ports of Los Angeles and Long Beach from El Salvador is one of more than 300,000 immigrants at risk of losing their temporary legal status in the U.S. after the Trump administration scrapped the program for a handful of countries.

“I’m a trucker, and I make my living with my license. Without my license, I lose my job,” Rodriguez told In These Times. “If I lose my job, I would lose everything—even my family, because I wouldn’t have a way to support them.”

Rodriguez arrived in the United States in 1996. After living undocumented for five years, the government extended Temporary Protected Status (TPS) to Salvadorans when a devastating pair of earthquakes rocked their home country, giving immigrants like Rodriguez protection from deportation and authorization to work. Now, he’s worried about what the cancellation of the program will mean for him and his wife, also a TPS holder from El Salvador, and their three U.S.-born children.

“We’re fighting so that they don’t take away our TPS,” he said. “I don’t want to be separated from my children, from my family.”

Rodriguez, part of a group of port drivers fighting for rights to join a union, is relieved to have parts of the labor movement on his side. Although he is not unionized, he says he already feels like part of a Teamsters local due to the union’s support for workers like him on two fronts: labor rights and immigration justice.

The Teamsters is one of the labor unions taking a stand to protect TPS holders with the message that immigrant rights are worker rights. Six unions representing 3.5 million workers have teamed up under the banner of Working Families United to join the campaign to save TPS and demand Congress take bipartisan action to allow TPS holders to stay in the country.

“The fight to save TPS for us is very clear from both a worker rights side and a union side. That’s what brought us together,” said Neidi Dominguez, national strategic organizing coordinator with the International Union of Painters and Allied Trades (IUPAT), which is part of the Working Families United coalition.

Not only would the cancellation of TPS directly impact scores of union members, but it would also strip unions of membership, Dominguez told In These Times. This is especially true for the construction and food service industries, which, according to the Center for Migration Studies, respectively employ 51,700 and 32,400 recipients of TPS from El Salvador, Honduras and Haiti, the three countries whose immigrants make up the vast majority of TPS holders.

“The goal is to protect families from deportation"

“The goal is to protect families from deportation,” Bethany Khan, spokesperson for the Culinary Union, a Nevada affiliate of the Unite Here union and part of the Working Families United coalition, told In These Times. “It’s about keeping families together, treating workers with respect and dignity, educating people on TPS and DACA [Deferred Action for Childhood Arrivals], and elevating the profiles of these workers.”

Thousands of TPS holders set to become undocumented as they lose their status over the next year won room to breath last week when a federal judge put a hold on the Trump administration’s termination of TPS for El Salvador, Haiti, Nicaragua, and Sudan. The pause did not extend to some 57,000 Honduran TPS recipients whose status will expire in January 2020. Regardless, campaigners aren’t skipping a beat in continuing to demand a long-term solution.

Working Families United has organized 10 events in 10 cities across the country in the lead up to the November 6 midterm elections to pressure congressional candidates to support initiatives that would give permanent status to TPS holders, Dominguez explained.

The Teamsters kicked off the series of events earlier this month in Los Angeles. Port drivers, including Rodriguez, dedicated the last day of their three-day strike to putting the spotlight on TPS and demanding legislative action for immigrant workers.

Rodriguez said the protest showed that immigrant workers are not alone and also helped spur further conversations about TPS.

Rallies in Tucson, Orlando, and Northern Virginia, and a TPS forum in Las Vegas, followed after the L.A. action. More events are planned next week in Houston and Atlanta,  and organizers are still finalizing plans for protests in in New York, San Francisco and Denver, according to Dominguez.

"Part of the community where we live."

For John Doherty, national communications director of IUPAT, the midterm elections are key to tip the scales away from the Republican Party, which he described as “a party that has historically been against workers and worker rights.”

Elva Landaverde, a Las Vegas hotel housekeeper and rank-and-file member of the Culinary Union, also sees the midterms as an important opportunity. She took a leave of absence from her job alongside some 100 other union members to canvas ahead of the election. An immigrant from El Salvador who has lived in the United States for 18 years, Landaverde doesn’t have voting rights in the U.S. Nevertheless, she’s knocking on doors to encourage citizens to cast their ballots for candidates that have committed to protecting immigrant rights.

“We need immigration reform,” Landaverde told In These Times. She has a non-immigrant status known as the U Visa, but TPS still hits close to home, as some of her family members are recipients. “Everyone has to go out to vote so that our voice matters.”

The Culinary Union, Nevada’s largest immigrant organization with 54 percent Latino membership, has been organizing for immigrant rights since before the Working Families United coalition formed last year. One important win for the union, according to Khan, has been securing immigration language in the contracts of 48,000 workers that will strengthen job protections for employees in the event that they lose their current immigration status.

Along with other organizations, the Culinary Union also has organized delegations of TPS members to share their stories with elected officials in Washington and lobby representatives to support legislation to swap TPS holders’ temporary status for residency.

Two pieces of proposed legislation, the Safe Environment from Countries Under Repression and Emergency Act (SECURE) in the Senate and the American Promise Act of 2017 in the House of Representatives, aim to regularize TPS holders’ status by making them eligible to apply for permanent residency, with the opportunity to eventually become citizens. If passed, the laws would end the uncertainty hanging over some 400,000 TPS recipients from 10 countries.

Victor Mora, a TPS holder from El Salvador who works at the Bellagio casino in Las Vegas, is one of the people who has traveled to Capitol Hill with the Culinary Union to share his story and call for permanent status. He has lived in the United States since the early 1990s and has three U.S. citizen children.

“We ask for support like how we have always supported this country,” Mora told In These Times, stressing the positive impact immigrant workers have on the U.S. economy.

Giovanni Peri, professor of economics and director of the Temporary Migration Cluster at University of California at Davis, has conducted research that confirms the academic consensus that immigration fuels job creation and stimulates the economy.

“Immigration in a local economy does not depress wages or reduce the job opportunities for American workers. Instead, it allows this place to continue to grow,” Peri told In These Times. On the flip side, harsh deportation campaigns can disrupt local economies and negatively impact wages and employment opportunities, he said.

Jose Palma, a member of the National TPS Alliance and a TPS holder from El Salvador who has lived in the U.S. for two decades, stressed that although the economic factors are undeniable, the role of immigrants in the United States goes much deeper.

“The TPS community, we are more than just an economic contribution to the United States. We feel that we are part of the community where we live,” Palma, a paralegal in Massachusetts, told In These Times. He has volunteered for various non-profit causes, and he and his three U.S. children are active in their local church. “We are part of the community, so we advocate not only for the undocumented or people with TPS, but for the whole community.”

More than half of Honduran and Salvadoran TPS recipients have lived in the United States for more than 20 years.

Palma applauded unions for joining the fight for immigrant rights, as well as for their willingness to follow the leadership of TPS holders. He’s optimistic that with support from unions, businesses and communities, advocates will be able to successfully pressure lawmakers to pass reforms.

“We need to build power with our allies to convince legislators to support a permanent residence campaign,” he said, adding that he sees the midterm elections as an opportunity to raise awareness about TPS.

According to IUPAT’s Dominguez, the awareness-raising is paying off.

“The TPS fight has been a really good bridge to a lot of members that struggle to understand all the intricacies of the immigration debate in the country and has actually opened up really constructive conversations,” she said. “This debate has been a good one in our membership to really start doing more political education about this issue.”

Dominguez believes that by leading by example, unions organizing around immigration issues will help strengthen the foundations of a larger progressive movement where unions can play a part in standing up for immigrant rights.

“It aches me to say that I don’t think that as an entire labor movement we have been as strong as we could have been in responding to these attacks against immigrants, against women, against Muslims,” she said. “But we have at least that fracture with the dominant silence that gives a better chance for the future that we can be the labor movement that we need to be in this country to actually build power for every single worker.”

For Rodriguez, the port driver and TPS holder from Los Angeles, the bottom line is simple: TPS holders are part of U.S. society and deserve residency.

“We don’t ask that the government help take care of us,” he said. “Just give us residency so we can continue to work hard with our families and move forward.”