Our Food System Is Built on Exploitation. Now Farmworkers Are Saying “No More.” 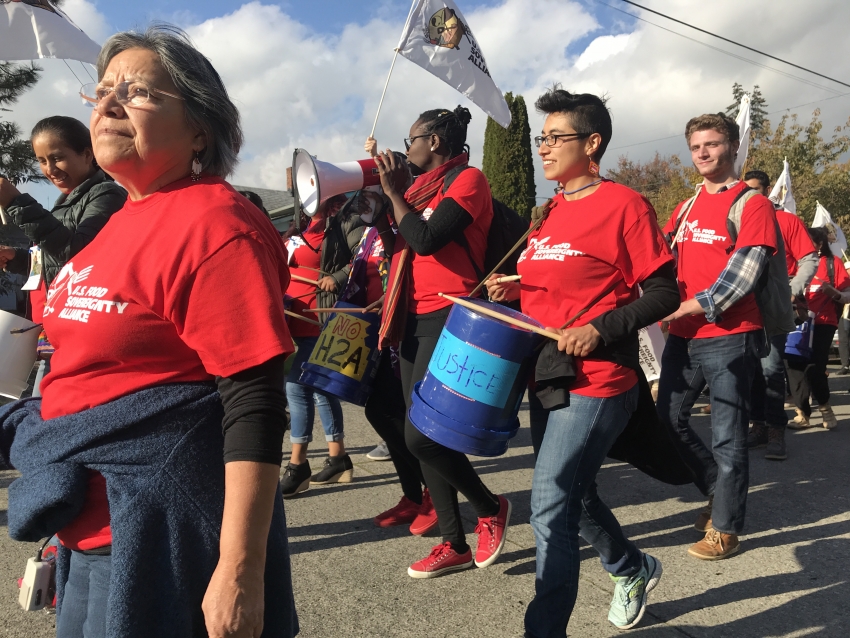 For Rosalinda Guillén, everything begins with food—and that means paying close attention to the treatment of workers at the foundation of the food system.

Standing recently on the steps of city hall in Bellingham, Washington, Guillén urged local lawmakers to defend the rights of undocumented farmworkers living and working in Whatcom County, home to 1,702 farms sprawled over more than 115,000 acres.

“In this city, that claims to be a liberal city, there is rampant racial profiling,” Guillen, executive director of the food and migrant justice organization Community to Community Development (C2C) based in Bellingham, said into a megaphone. She slammed a pattern of “arbitrary” detention and deportation and “clear cooperation” between local law enforcement and federal immigration authorities.

Since early 2017, Guillen and other local activists have held weekly protests to urge city council to pass a sanctuary city ordinance to help protect undocumented residents from deportation. In August, Immigration and Customs Enforcement detained at least 16 people in Bellingham—local rights groups claim the number was nearly 30—fueling calls for a sanctuary policy.

In the 88th week of C2C’s “Dignity Vigils” calling for councilors to make Bellingham a sanctuary city, more than 100 representatives of food and climate justice groups from across the United States and a handful of international activists—all gathered for the national assembly of the U.S. Food Sovereignty Alliance—joined the protest. Local organizers in Bellingham, taking the lead from farmworkers, draw a clear connection between migrant justice and food sovereignty. For them, as long as the people working closest to food’s roots as farmworkers are mistreated, including earning wages that don’t even allow them to put meals on their own tables, there’s no way to have dignified or just food choices up the food supply chain.

“Everybody has to eat,” Antonio Tovar, interim general secretary of the Farmworker Association of Florida, said to In These Times, underlining the “paradox” that farmworkers often cannot access healthy food. “When the decision about what to eat isn’t yours, you have no way to be free.”

Undocumented farmworkers in the Bellingham area have won historic labor victories in recent years. In 2013, farmworkers formed a union, Familias Unidas por la Justicia, to fight for better working conditions at Sakuma Brothers Farm in Burlington, Washington. After nearly four years of walkouts and boycotts, the union secured a landmark contract guaranteeing berry harvesters a minimum hourly rate of $15. In the process, the union also won paid 10 minute breaks for piecework farmworkers through a lawsuit against Sakuma in Washington’s Supreme Court.

Benito, a founding member of Familias Unidas and part of its leadership committee, said he now earns about double the pay for the same work—10 to 12 hour days, seven days a week—as a result of union organizing. “Many work rules are changing,” he told In These Times.

The union also successfully blocked Sakuma’s application to bring farmworkers through the H-2A Temporary Agricultural Workers visa program by collecting farmworkers’ signatures to disprove the company’s claims of labor shortages in and around Washington state, Ramón Torres, president of Familias Unidas, told In These Times. He argued that the fact that migrants with H-2A visas aren’t well informed of their rights enables employers to “enslave” workers. “The other thing is that they use [H-2A] to break our union, strikes, or movements,” Torres added.

Building on the union’s success, Torres and three other members of Familias Unidas launched a farmworker-owned cooperative last year with a vision of creating better working conditions, autonomy, and adequate access to healthy food for farmworkers.

“We have to go ask for [food] stamps. We have to go to food banks. And it’s not just,” Torres said. “A farmworker who picks watermelons in the end can’t buy the watermelon because he doesn’t earn a fair salary to afford it.”

At the Bellingham Food Bank, project coordinator Max Morange told In These Times that farmworkers are among the Food Bank’s clients, though the organization does not collect any demographic data. And although identification is not required and individuals can access the food bank regardless of immigration status, Morange said he has observed a correlation between “fear and uncertainty” fueled by immigration enforcement in the community and who he sees walk through the food bank doors.

The Food Bank and other local partners are looking to better support the undocumented community through outreach initiatives, while the Food Bank strives to become a “known safe place” for historically marginalized communities, Morange said.

For Torres, Familias Unidas’ worker-owned cooperative, called Tierra y Libertad, is a first step toward tackling farmworker food insecurity at the root. Protecting farmworkers from exposure to toxic pesticides by planting organic crops and keeping children studying instead of toiling in the fields at young ages are also big motivating factors, he said.

Tierra y Libertad already grows four acres of organic strawberries and 20 acres of blueberries on rented fields, and the cooperative is looking to purchase farmland to increase workers’ control over production. According to Torres, the long-term goal is to create a network of cooperatives that foster mutual support among farmworkers and show that worker-owned alternatives are possible.

“Everything we are doing is to help farmworkers,” Torres said. “We’re tired of so much exploitation.”

“Everything circles around food”

For Guillen, a seasoned farmworker rights organizer who began working in the fields in Washington’s Skagit County at the age of 10, achieving food sovereignty in the U.S. would mean being able to sit down to eat knowing that neither human beings nor the environment suffered to produce the food on the plate. “Everything circles around food, and what people eat, and how food is produced, and how food is governed, and what policies are set in the production and marketing of food,” she said to the crowd outside Bellingham city hall.

The U.S. Food Sovereignty Alliance (USFSA), a coalition of national, regional, and local food, climate and immigrant justice groups from across the United States, is also making the link between food and farmworker rights. At its national assembly in Bellingham from October 12 through 15, the USFSA identified farmworker rights as a top concern along with other priorities such as agroecology, land and water rights, political education, as well as regional issues like factory farms—known as concentrated animal feeding operations (CAFOs)—in the midwest.

The concept of food sovereignty expresses the right of peoples and communities to self-determine how food is produced, distributed, and consumed. The movement for food sovereignty proposes small-scale, sustainable agriculture as the solution to food and climate crises, and calls for transforming the food system by putting decision-making control in the hands of people who produce food.

The international social movement La Via Campesina, representing millions of peasants and smallholder farmers around the world, formalized and popularized the term as an alternative to market-based approaches, such as food security, that fail to see hunger as a structural problem stemming from food being made a commodity.

The Farmworker Association of Florida is putting the food sovereignty vision into action through Campesino Gardens—community gardens focused on providing for local farmworkers—where families can grow and harvest healthy food. Farmworkers and their families tend to the gardens in their spare time after a long week in the fields, and other volunteers, such as students, provide extra support.

Unlike the pesticide-intensive crops many farmworkers produce, the Campesino Gardens grow food using sustainable, agroecological practices. A growing body of scientific research links pesticides to chronic health problems, and the World Health Organization has stated that the key ingredient in Monsanto’s RoundUp herbicide “probably” causes cancer. The Farmworker Association of Florida has been organizing for years to protect farmworkers from pesticide exposure, and the Campesino Gardens are a small step toward building an alternative.

“What we would like to see at least is that each family can produce enough food to feed themselves for a good part of the year,” Tovar of the Farmworker Association of Florida explained. He noted that farming seasons also impact access to fresh food, adding: “We need to find a way to make our communities sovereign by looking for alternative channels of distribution.”

Farther up the food supply chain, the trend of food insecurity among food workers continues in the restaurant industry. For Jonathan Roberts, a member of the Detroit Food Policy Council who has organized restaurant workers, the problem underlines why integrating labor concerns into conversations about food is essential.

“We mystify the relationship between people and food. Food doesn’t exist without agricultural labor; it doesn’t exist without serving and processing and transportation,” he told In These Times, stressing that food sovereignty is a useful political framework since it shines a light on where food comes from and how it is produced.

“Food sovereignty can’t exist when we have overproduction and at the same time food workers—like servers and bartenders and cooks—who can’t even afford the food that they are preparing and serving to customers,” Roberts added. “That contradiction in and of itself is enough to think about why food sovereignty demands a labor analysis.”

“Being able to feed ourselves”

The problems that food sovereignty aims to solve aren’t limited to agriculture. According to Niaz Dorry, director of the Northwest Atlantic Marine Alliance (NAMA) and the National Family Farm Coalition (NFFC), industrial fishing poses similar challenges to fishworkers and traditionally fishing communities as industrial agriculture does to farmworkers and farmers, including food insecurity.

“There are people who fish and people who farm who for all intents and purposes are owners of their businesses and they can’t afford to eat their own food,” she said, reflecting on stories heard during recent visits to fishing and farming communities across the country as part of the America the Bountiful tour, a joint project between the NAMA and the National Family Farm Coalition.

According to NAMA, fisheries are following in the footsteps of industrial agriculture in becoming a more corporate and extractive industry. But organizers are also taking cues from historic farmworker struggles to fight for food and worker justice in fisheries, too. The coalition Pescando Justicia, for example, an initiative of the Centro Comunitario de Trabajadores in New Bedford, Mass., supports organizing among fish and seafood workers.

For Dorry, transforming the food system must focus on economic empowerment that enables fishers and food producers to earn fair prices based on their costs of production, not global economies of scale.

“[Food sovereignty] for us is about being able to feed ourselves as communities of farmers, fisherman and fishworkers and feed ourselves culturally appropriate food,” Dorry said, adding that for producing communities, this right also implies having access to enabling resources. “For farmers that means, seed, land, water; for fishermen it means working waterfronts, access to fishing rights, and clean water.”

Back in Bellingham, Familias Unidas and its cooperative, Tierra y Libertad, provide one example to follow of fighting to put productive resources in the hands of those at the heart of the food system. Torres of Familias Unidas doesn’t use the term food sovereignty, but for him the link between farmworker justice and food movements is still a given.

“[People] can’t see the faces of the workers. They can’t see if there is exploitation, if workers are gaining adequate wages, if children are working,” he said, adding that he is surprised when he hears people who eat vegetarian, for example, but aren’t aware of farmworker rights.

“It’s very important for everyone who is working in anything related to food to see the treatment of the workers,” he continued. “Because that’s where it all starts.”