Bernie to Walmart: Pay Your Workers $15 an Hour, or Else 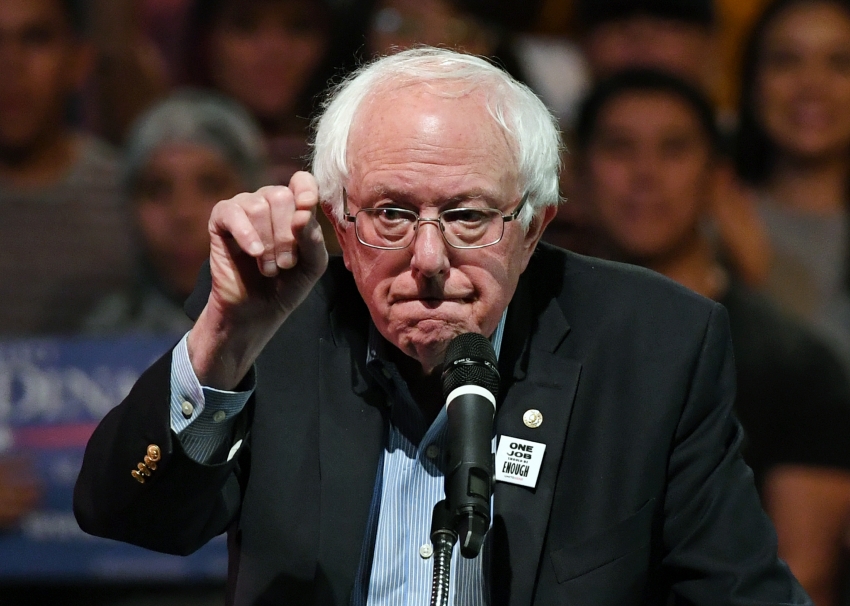 Bernie Sanders at a rally in October (Photo by Ethan Miller/Getty Images).

Fresh off a successful campaign to to name and shame Amazon for its low wages, Bernie Sanders is setting his sights on Walmart. Today, the Vermont senator is introducing the “STOP Walmart Act,” a bill that demands the retail behemoth raise its wages or face penalties.

Co-sponsored by California Rep. Ro Khanna, the bill would prevent Walmart and other large companies from buying back stock unless they pay all employees at least $15 an hour, allow them to earn up to seven days paid sick leave and cap CEO pay at 150 times median worker compensation.

The largest private employer in America, Walmart has been targeted labor activists for years over its low wages, anti-union policies and history of alleged workplace discrimination. Excessive giveaways in the form of stock buybacks are a way for executives and wealthy shareholders to extract corporate profits for themselves rather than investing them in higher worker wages and benefits, according to progressive economists.

“Investors and executives may be celebrating positive results and increased expectations, but meanwhile hundreds of thousands of Walmart’s frontline employees and our families face the daily struggle of making ends meet on poverty wages,” said Shashauna Phillips, a Walmart worker and leader in the worker advocacy group OUR Walmart, in a statement e-mailed to In These Times.

With competitors like Amazon and Target committing to $15 an hour, said Phillips:

Our company has a choice to make: it can fall further behind by spending billions on share buybacks or it can do what’s right for both the company and its employees by paying all workers a living wage The efforts being led by Senator Sanders and Representative Khanna show what’s possible when elected leaders stand with working people to demand more from our country’s largest private employer.

The Amazon bill, which would impose a tax on large companies whose employees have to rely social assistance, didn’t stand much of a chance in Congress. It was also denounced as unworkable by a host of policy wonks.

But it’s hard to deny that it’s working as a pressure tactic. Last month, Amazon announced that it would bump workers’ starting wages to $15 an hour. The change leaves plenty to be desired: The company also slashed stock options and incentive-based pay for employees, and it later became clear that thousands of Amazon delivery drivers would not be eligible for the wage bump. But Jeff Bezos acknowledged that the company had “listened to our critics,” a sign that Amazon is beginning to feel the heat.

Sanders is now taking a similar tack with Walmart. On Wednesday evening he tweeted, “The Walton family of Walmart owns more wealth than the bottom 40% of Americans. Meanwhile 55% of Walmart’s associates are food insecure. This is what we mean when we talk about a rigged economy, and why I'm introducing a bill tomorrow to make Walmart start paying a living wage.”

Earlier this year, Walmart announced that it was raising its starting wage to $11 an hour, thanks to savings from from Trump’s tax cuts. But there was a catch: On the same day, the company also announced plans to lay off thousands of workers. And $11 an hour still amounts to an annual salary below the poverty line for a family of three.

On Wednesday,  Ken Jacobs, chair of the University of California Berkeley's Labor Center, told the Washington Post that Walmart would need to spend about $3.8 billion to raise its minimum wage to $15. That might sound like a lot, but the Walton family is worth about $180 billion, and the company takes in an annual revenue of $500 billion.

In addition to the Amazon and Walmart bills, last week Sanders announced that he plans to reintroduce a bill this winter that would raise the federal minimum wage to $15 an hour.

None of these measures are likely to pass in a GOP-controlled Senate, of course, but that’s not the main point. Sanders and Khanna are using their public profiles to take billionaires to task. That’s a good thing for the progressive wing of the Democratic party, and for working people everywhere.