How To Elect Democrats Who Actually Answer To Workers 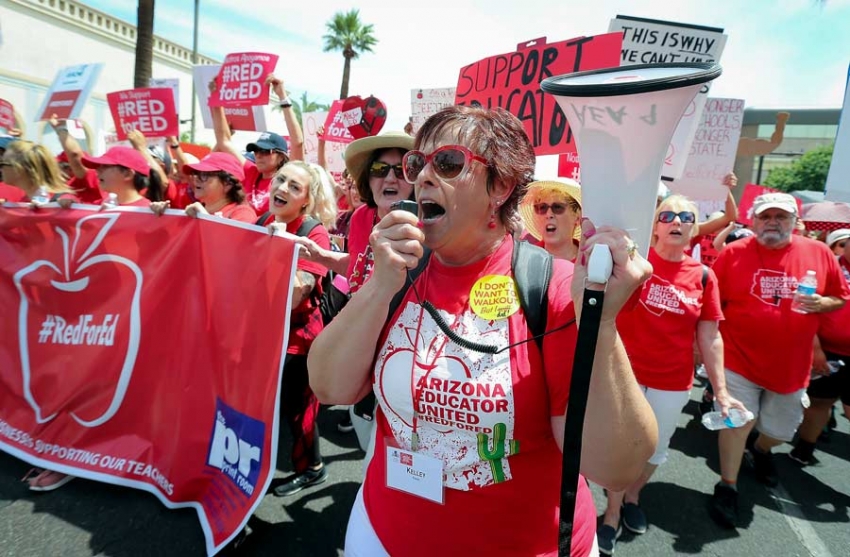 Educator Kelley Fisher leads striking Arizona teachers to the State Capitol during a Phoenix rally on April 26, 2018. Organizing power will be key to the Left's success in 2020. (Ralph Freso/Getty Images)

Over the past decade in particular, right-wing forces have doubled down on their multifaceted effort to rig the rules of governmental elections. Examples include unlimited and unaccountable spending by the employer class, restrictions on who is eligible to be on the voter list itself, and gerrymandering galore.

Many of these tactics will feel familiar to workers, whose power has been undermined for decades by bosses manipulating the system. Employers routinely “gerrymander” workplaces before union elections, removing pro-union workers from the eligible voter pool with gimmicks that include drastically reducing their hours or alleging they have newfound management duties.

At times it’s blatantly obvious that the right-wing electioneers are borrowing straight from the union-busting playbook. In blue-state Massachusetts, voters statewide got a taste of one of the most effective tools in the union avoidance industry, captive audience meetings, where workers are forced to sit through anti-union presentations as a condition of work. Hospital bosses went to such extremes to defeat a November 2018 ballot initiative to secure safe patient limits for nurses that they forced patients and families entering emergency rooms, checking in for surgery, or undergoing any procedure to sit through briefing sessions where they were told that voting “no” on the initiative was the only way to ensure the hospital or clinic would remain open. (The bosses won.)

The employer class has eviscerated workplace democracy over the past 40 years. Using many of the same weapons, they’ve got their sights set on civic elections. To preserve democracy and rebuild working-class power requires a key tactic revived in 2018, in the nick of time: the all-out strike.

Strikes are a uniquely powerful form of the political education required to prepare workers to pull the levers in the voting booth because they clarify the most important political lesson urgently needed today: There are only two sides, the owners and the rest of us. Unions that still win great contracts—which generally requires their having a credible strike threat—can point the way, as educators did earlier in 2018 from West Virginia to Oklahoma to Arizona and beyond. The #Red4Ed movement led to unprecedented numbers of educators running for office and winning, and made support for public education a key issue up and down the ballot. In Arizona, the movement soundly defeated a Koch Brothers-backed initiative to expand private-school vouchers. This suggests that to build effective political operations, unions should understand that more strikes are key to winning elections, not just good contracts.

Unions will also need to get themselves out of the mire of various dead-end debates around elections. For one, we can simply ignore the false binary of whether we need to focus either on registering and turning out the new demographic majorities—millennials and people of color—or on recovering the voters we’ve lost. We can—and, to win real policy changes post-election, must—do both.

Then there’s the debate about what kind of candidates labor should endorse. Most unions do the exact opposite of what the working class needs, by sitting out the primaries and endorsing in the general election, leaving workers to vote between the lesser of two generally useless candidates (decreasing rather than increasing turnout). This is because there’s a revolving door between the political staff of unions and the consultant industrial complex that runs Democratic Party electoral strategy, resulting in outsized influence by party leaders whose inclination is always to defend their own in elective office. If unions do participate in the primaries, they endorse the incumbent. To name one obvious example, Alexandria Ocasio-Cortez received zero union endorsements against establishment Democrat Joe Crowley. ’Nuff said.

Endorsing candidates who raise workers’ expectations can best be accomplished by democratizing the electoral endorsement process in every union. Once you surmount the challenge of getting those in control to share power, opening the endorsement process isn’t difficult on a technical level—you just hold a vote. It’s also crucial to unions surviving in the post-Janus climate: The more workers are engaged in making real decisions in their unions, the more ownership they take, and the higher the percentage of workers who understand why membership matters.

When I ran the electoral endorsement process of the Nevada SEIU (where, incidentally, unions have directly led to the state turning blue), we let candidates know that to even be considered, they must do far more than have a lackey in their offices fill in a union questionnaire. At the least, they had to attend a forum open to all workers. Making it a condition of endorsement that candidates take part in pro-union actions would go even further to assess whether they will actually publicly stand with workers in struggle, not privately promise and forget the commitment after Election Day.

To hold policy makers accountable, workers must be able to build fighting organizations in which workers, not full-time staffs in sealed-off political departments, call the endorsement shots. For the working class to get out from under decades of austerity, climate change, union-busting and more, workers need to have the power to force politicians to make the policy changes needed at work and in their communities. That requires building supermajority participation, forging high unity and solidarity among the ranks—in short, developing the same capacity required for an effective strike. The sooner we establish union democracy, the sooner workers will get to pull the lever for politicians committed to pro-working-class policies, not merely winning their election.