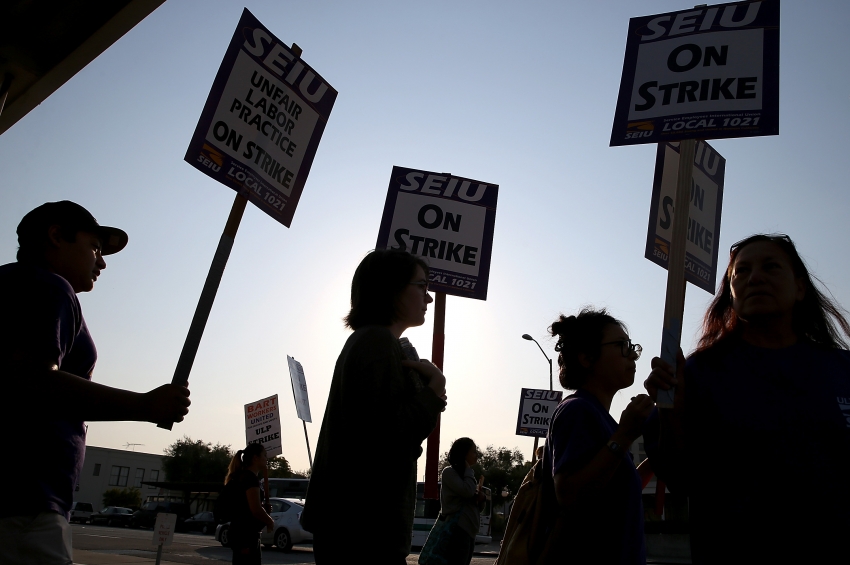 When asked why he’s planning to support the Global Climate Strike slated for September 20, Larry Hopkins, a rail crew driver for the transportation and maintenance company Hallcon, says the reason is simple: “I want to help preserve and protect our personal safety. Because right now, we’re in a climate emergency that is very bad for our health and our safety.”

Hopkins is president of Local 1177 of the United Electrical, Radio and Machine Workers of America (UE), one of several U.S. unions that endorsed the climate strike, which is expected to hit all 50 states and 150 countries. Delegates to the national convention of UE, which represents roughly 35,000 workers, voted on August 29 to officially endorse the climate strike, calling on members “to find creative ways to participate.”

UE is not alone. The Global Climate Strike lists 56 unions, trades councils and federations from around the world that have declared their support, hailing from Australia, Canada, France, Germany, South Africa, New Zealand, the United States, the United Kingdom, Ireland and Italy. The South African Federation of Trade Unions and the Federation of Unions of South Africa, which together represent 1.3 million workers, have notably signed on.

Among the list of participating unions are eight based in the United States, including the Service Employees International Union, which represents nearly 1.9 million members, and the Massachusetts Teachers Association.

Sara Nelson, president of the Association of Flight Attendants-Communications Workers of America (AFACWA), told In These Times her union will “absolutely support the Global Climate Strike and actions around the world.”

The September 20 climate strike is timed ahead of the UN emergency climate summit, with another coordinated strike planned for September 27. On their website, strike organizers declare that “millions of us will walk out of our workplaces and homes to join young climate strikers on the streets and demand an end to the age of fossil fuels. Our house is on fire — let’s act like it.” According to the UN's Intergovernmental Panel on Climate Change report released in October 2018, we have just 12 years to stave off the worst effects of the climate crisis by making "rapid, far-reaching and unprecedented changes in all aspects of society."

While the 16-year-old Swedish climate activist Greta Thunberg has attracted significant media attention, the strike on September 20 is being organized by young people across the world. In an open letter published in May, 47 youth activists called on adults to support climate strikers.

Nelson says those young people deserve labor’s solidarity. “In order to create change, the first step is defining the problem for the masses and the urgency of fixing it,” she underscores. “Collective action is an effective way to draw attention to an issue, inject it into the popular narrative, and demonstrate what people are willing to do to force a political will for solutions.”

The Communication Workers of America’s “Next Generation” program, which aims to “identify, recruit and train young CWA members,” released its own statement declaring it “stands in solidarity with young people all over the world.”

The biggest U.S. demonstrations are expected in New York City, where the public school system recently announced that its 1.1 million students have permission to walk out in order to participate in the climate strike on September 20 if they have parental consent (while younger students “can only leave school with a parent”). Alexandria Villaseñor, a 14-year-old strike organizer, said that the announcement came “after many months of hard work and conversations between we activists and the city."

Yet the United Federation of Teachers, the union that represents most teachers in the New York City public school system, has not released a public call for teachers to join those students in a walkout. The union is, however, inviting members to participate in a labor solidarity contingent for a student rally.

Notably, the American Federation of Teachers has not called on members to walk out, but the union’s president, Randi Weingarten, did release a seemingly supportive—if somewhat vague—statement: “If we can help students learn about the science of climate change, help them understand free speech and citizen advocacy as part of civic education, and encourage their belief in themselves, we’ve done our job in helping the next generation secure their future,” she said.

The AFL-CIO, the labor federation of 55 unions that together represent 12.5 million workers, has not called on members to participate, although some of its affiliated locals have.

In many cases, union participation will not look like a typical strike, in which workers walk off the job against their bosses’ wishes. Hopkins says he’s not planning to strike, but he will attend Chicago’s student strike and march that will take place September 20. “I’m in support, but my contract I'm presently under has a no-strike clause,” he explains.

UE members will also join Warehouse Workers For Justice and Sunrise Movement Chicago in a rally on Friday to support Amazon tech workers who have vowed to strike against Jeff Bezos. Tech workers are demanding that Bezos achieve zero emissions by 2030, stop funding lobbyists and politicians who are climate deniers, and get rid of all “contracts for fossil fuel companies to accelerate oil and gas extraction.”

Organizers acknowledge that unions' participation in the climate strike won't necessarily take the form of traditional labor strikes. Stephen O'Hanlon, communications director for the Sunrise Movement, one of the groups organizing the strike, tells In These Times, “It looks different for each union to support the strike, but in general it looks like encouraging members to join in and walk out of work. Or if some people are not working that day, they can show up to a rally.” O’Hanlon adds, “People are generally doing different things in different places.”

An organizing resource on the Global Climate Strike’s website encourages workers to “make a proposal to your employer, outlining how and why your workplace should join the #ClimateStrike.”

Chris Brooks, a staff writer and organizer for Labor Notes, a media and organizing labor movement project, told In These Times that, to truly address the climate crisis, we need confrontational strikes that are waged without the permission of--and in direct conflict with--bosses. “Climate change is a crisis caused by capitalism, and addressing it in any fundamental way will require us radically reorganizing the economy,” he said. “I don't think we're going to get there by asking the boss for permission. If the working class is going to address climate change, we're going to have to break some rules.”

“It’s definitely worth supporting the climate strike,” he continued, “but the crux of the matter is that business as usual cannot continue. As long as we engage in actions that don't disrupt the status quo, it will be easy to ignore. Strikes are the most disruptive action you can do in society.”

Roberto Jesus Clack, the associate director of Warehouse Workers for Justice, told In These Times that he thinks Brooks’ critique has merit, and emphasized the collective action of the climate strike is still meaningful. “The reason we're jumping on this is we want to agitate the labor movement to take this more seriously. It's still an agitation of the workers in the workplace around climate change.”

For some, the climate strike is an opportunity to build towards a traditional labor strike. Martinez of UE Local 255 told In These Times, “If we, as workers, are seeking a true just transition, we must demand it through all means possible. And although the upcoming climate strike is not like your traditional labor strike, as to stop production, it has the power to get there and I envision and hope it will. When we realize the power to create change is within us all, united we become unstoppable.”

There are signs that some workers are gearing up for a confrontation with their bosses, although it’s difficult to know exactly how many will withhold their labor. About 700 Google tech workers, in addition to Microsoft employees, are planning to walk off the job on September 20, along with over 1,500 Amazon employees, most of them in Seattle.

Bezos appears to be feeling the heat. The morning of September 19, he announced a climate pledge, which Amazon describes as “a commitment to meet the Paris Agreement 10 years early.” According to a company press release, this includes a commitment to “net zero carbon by 2040 and 100% renewable energy by 2030.”

But Amazon Employees for Climate Justice, the group coordinating the work action, said in a press statement that the strike is still on. “Amazon’s newly-announced ‘Climate Pledge’ is a huge win for Amazon Employees for Climate Justice, and we’re thrilled at what workers been able to achieve in less than a year," said the group. "But we know it’s not enough. The Paris Agreement, by itself, won’t get us to a livable world. Today, we celebrate. Tomorrow, we’ll be in the streets to continue the fight for a livable future."